Skip to main content
Posted by The DoorwayTo August 13, 2019 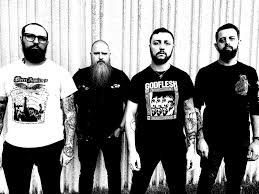 1.You being from MN I must ask how did that Minneapolis punk /hardcore scene of Husker du, replacements and soul asylum back in 80s influence you at all?

The early 80's punk scene in Minneapolis laid the groundwork for what became the Minneapolis hardcore sound of the 90's, which was much more of an influence on us.  During Profane Existence's early years with bands like State Of Fear, Misery, etc, Minneapolis had a sound it was known for (like many American hardcore scenes with classic underground factions) and that still can be heard in Hive today.

2. I hear elements of bands like Integrity, Man is the Bastard, His hero is gone. Deadguy and Dropdead. What bands made Hive who they are?

When we originally started the band I'd say our main influences in our song writing were His Hero Is Gone, Cursed, and Gauze.  We have our own formulas now, but those bands are and will always be inspiring.

3. If you had only 4 words to describe band which ones and why?

4. Is there a theme behind Most vicious animal?

The songs that make up the album have several themes, most political and some personal.  Themes range from gender roles and the weaponization of such, the slow extinction of religious politics, and the unseen class war propped up by the rich and continued by self imposed 'patriots'.  The title track from which the album was named is specifically about many modern politicians as literally the most dangerous thing to the planet and us as a people.

5. Live or the studio were does Hive prefer and why?

Both are equally important, but at it's core Hive is a punk band and the live experience is what makes punk special.

6. If Hive could cover any song and make it there own . which and why?

The only song Hive has ever publicly covered was "When Ya Get Drafted" by Dead Kennedys, which also appeared on a Cvlt Nation compilation celebrating their Fresh Fruit For Rotting Vegetables album.

7. What new music is impressing members of Hive currently?

Too much to list, and any member would give very different lists from the others.  That being said, we are still very much music-heads and constantly searching for new bands to discover.

8. If you could make a video for any song on Most vicious animal which would it be and how would you want it to look?

A video has been completed for a song from MVA and will be available soon.

9. Working with two labels Seeing Red and  Crown and Throne ltd how did this come about and is it a long term connection?

We already had standing relationships with both labels.  Crown And Throne released our first full length "Parasitic Twin" back in 2017 and we were happy to work with Garth again.  Seeing Red we hadn't worked with already, but Thomas had released "Under The Regolith" by our drummer Mike's other band, Antiverse.  He offered to release MVA on CD, while C&T released it on analog formats. I would consider us lucky to be able to work with both men again.

10. Do the members have other active projects you like to talk about?

Mike (drums) plays in Antiverse, as well as Disembodied and Martyr AD.  Jim (bass) is the branchild behind old school death metal band Noose Rot. Morgan (guitar) has a few solo projects including Prison Shank (d-beat) and Tician (electronic).  Dan currently is just playing with Hive, but is an accomplished audio engineer and producer, most recently doing the newest album for Off With Their Heads.

11. Whats your thoughts on Visuals and imagine and it importance in 2019 for the underground. I feel visuals esp live can change the way you see a band from that point forward. You thoughts?

Visuals for an album or release are extremely important.  I wouldn't say just as important as the music, but I view the totality of a release as a piece of art, and poor presentation can diminish an otherwise strong album.

Live, incorporating visuals, while good for what some bands do, are not something Hive is interested in.  Save for a band logo on a piece of equipment, we are there to create our presence with our performance.

12. Music of  Words how does  Hive being the album writing process?

Generally because of time constaints songs are prewritten and presented to the rest of the band and then hashed out together.  We want every song to be able to stand on it's own legs, so every song exists on it's own and not necessarily as part of a larger body of work.

13 .Digital Media  (You Tube, Bandcamp,Twitter, Podcast, Blogs) are they a blessing or curse?

14. Thank for the time any closing thoughts here .

Thanks for the interview and the interest in our band.