Skip to main content
Posted by The DoorwayTo August 31, 2019 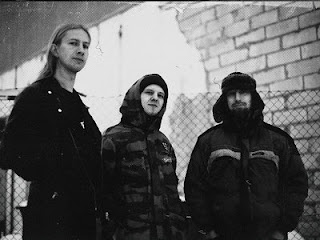 1. Your crusty Dbeat Death metal tones reminds me of  Entombed, Nails, Napalm Death and At the gates. What bands have inspired Swarn?

Tiit: We get inspired by the raw, extreme and honest music. It can be Death/Black/ Crust ect. You can really tell if music is created with heart and soul. I find Demo tapes really inspiring. They have the sort of magic and atmosphere you can’t recreate. I think that in the extreme music scene a band has to have their own sound. If a record is too polished it becomes too boring and clinical. You then take all the life and soul out of the music what should be there in the first place. It’s called extreme music after all right? Let the mix be a little rough, don’t tweak out all the little mistakes. Let the music and record have it’s own face it’s own characteristics. That’s what inspires people.

2. Estonia is newer to the metal world I know eastern europe as always loved extreme metal. What impressive bands from Estonia should my readers be checking out? I know its next to Finland do the two scene have similar ideals and sounds?

Anti: I would like to recommend a very fresh death metal act Ziegenhorn from our home town Tartu. They just recently had the first demo “Goat Demo(n)” out, you can discover it from https://youtu.be/k3eWOJJCndA. And if you fancy a bit more technical or even melodical stuff, then one of my favourite groups in this field is definitely Throcyte (their demo from 2015 is uploaded here https://youtu.be/ioV9q5hw-R0).

As for the comparisons among Estonian and Finnish metal scenes, then indeed the bands interact with each other and play at each others gigs (our capitals Tallinn and Helsinki lie only about 80 km from each other), so the bond is naturally quite strong. At the same time the local metal scenes have evolved slightly differently in Estonia and Finland, so I wouldn’t say that there is some kind of common shared sphere of ideas and sounds. Finland certainly has one of the most established metal music industries in the world whereas Estonian scene has remained mostly in the amateur league (except for the folk metal act Metsatöll who has gained wider international fan base).

But let’s keep in mind that in order to find the most inspiring creation and healthiest attitudes towards it one must dig in the underground spheres of any scene. This goes both for Finland and Estonia, as well as every metal scene there is on this damn planet.

3. How does Swarn created albums  do you work on lyrics or music 1st? Do you like to have album completed before going in studio or keep it loose and finish in the studio?

Tiit: In our case the music and the atmosphere comes first. Then based on that lyrics are written. Of course while being in studio the lyrics can change and have changed. Usually we have already written all the music before the studio. It’s just the way we operate.

Anti: The process usually goes like this: Tiit presents me a new song and I start to think about the general mood and the main theme of it. It’s much easier to write the texts when you already have the central story set in your head. I try to record the demo version of the vocals first and then polish the ideas in the studio. But indeed, as Tiit already mentioned, sometimes the lyrics and accents change significantly during the recording sessions. Of course, we discuss these things among ourselves in order to get the final result that satisfies us both.

4. Is there a theme throughout  " Black Flame order" ?

Anti: When I joined Swarn in the spring of 2018, I asked Tiit what the main theme in the songs would be and one of the key words he mentioned was “cosmic horror”. From this point it was pretty easy to tune my creativity in the vibe of great master of horror, Mr. Howard Phillips Lovecraft, who heavily studied the topics of powerlessness and vanity of humanity before the great forces who are simply indifferent about our existence. Not that Swarn tries to copy Mr. Lovecraft’s ideas but there’s no doubt that the same key themes are present - the presence of grand cosmic forces (you can name them “laws”, “patterns” or whatever you like) and their indifference towards our petty existence. And - as a clumsy attempt to deal with these enormous powers - the emergence of various cults, sects and religious practices. These aforementioned themes emerge regularly in Swarn’s lyrics.

5. If you could make a proper video for any song on " Black Flame Order" which would it be and why?

Tiit: Out of all the songs I would pick “Black Flame Order”. It’s fast and atmospheric. It would allow to make something really interesting. If we were to make a music video it would be more  cinematic and with a story. Something that would really compliment the song, rather than some people playing in front of the camera.

6. Your album is a co release with Redefining Darkness and Raw Skull how did you come to work with both and what are you hoping with  " Black Flame order" ?

Tiit: Since I knew that these labels have a great output in general – like the band Pyre
from Russia – then I just mustered up the courage and eventually sent some music to Redefining Darkness. Since RDR really liked it, they then forwarded it
to a Dutch label Raw Skull Recordz. They release mutually so “Black Flame Order” is released in both the United States and in Europe at the same time. Most of all, we hope to inspire people to write and to make their own music.

7. If you could tour with any band what would be the perfect touring partner in the bands eyes?

Tiit: It would be nice to spread terror and chaos into the world touring with Deceitome, our label mates from Tallinn, Estonia, who released their EP “Flux of Ruin” simultaneously with our album.

Anti: That would be a real heavy-weight roller.

8.In 5 words describe the bands sound to someone that is about to listen to band for 1st time?

9. Is  Bandcamp, Youtube, Digital media a blessing or a curse for smaller extreme music bands in 2019?

Tiit: Blessing and a curse at the same time, as it is often in life. At one hand it’s easy to reach to a lot of people and make yourself heard and at the other hand there are so many bands that you could just drown. It’s not important if you will be successful or not. It’s all about just making music what you love  and contributing to the UG.

Anti: Although tape trading and other „non-digital“ distribution methods are still very important ways of distributing music and they sure help to achieve this special underground aura on the bands and their creation, the reality is that the Internet has come to stay in our lives and nowadays the majority of the music is spread in digital formats. And it definitely helps the music to reach over the borders of the local scene. The choice is ours.

10. Is there one thing that Swarn wants our readers to know about the band?

Anti: There are many things that Swarn does not want the others to know about. Every sect must have its filthy secrets.

11. Live  vs studio which does the band prefer more and why?

Anti: So far Swarn has been a predominantly studio band and in a way it has helped us to keep things simple - Tiit could concentrate on the music and I dealt with the lyrics and vocals. The live line-up is still quite new for us but I hold the firm belief that playing live is an important reason for a band to exist and function at all - the concerts allow to spark the raw energy of the music in its purest form. It’s called “live music” for a reason. It may sound controversially but death metal should be played live. The concerts in their essence can actually be very close to the ancients rites - through the special practices which alter the state of mind of the participants, the stories of the myths are revitalised, they become real for a moment. And this is something we also would like to achieve in our concerts.

12. How does earlier material differ from " Black Flame order"?

Tiit: When the first EP was recorded back in 2016, swarn was  still searching THAT sound. There were a lot of directions to go to. After it was done something clicked and Black flame order was born. I guess we found our sound. Yes the EP was very raw and Demo like but it had a great atmosphere.

13. Do the members of Swarn have other project the perform or record in ? Please let the reader know to check them out?

Anti: We both also play in a psychedelic black metal band called Langenu (you can check us out here: https://langenu.bandcamp.com/releases) and are in a process of recording new material. I also play in a blackened viking metal band Ulguränd (subscribe our Youtube channel: https://www.youtube.com/channel/UCgsJQ7g65WThiFz6qxCjneA) where lyric-wise I concentrate on telling the stories about historical events of North-Europe.

Despite being quite a small town Tartu has a lively extreme metal scene fluttering here. We have a group of bands that form a so-called creative order (or maybe a kvlt?) called Pergerus. In addition to Swarn, Langenu and Ulguränd which I already mentioned there are very good bands like Form, Mortferus and Tapper in this order. As is the case of practically every local metal scene in the world then all the bands are tightly intertwined, sharing the same members. Our bass player Sander is also a member in a black metal band Kaev and a veteran pagan metal band Bestia. To sum it up - metal scene in Estonia is alive and well!

14. Thank you for the time any closing thoughts here.

Thanks to all who have supported us so far!! You all are just feeding the fire even more! Support from all of you have been overwhelming. We have recorded some new songs already and we are working on new stuff. And of course big thanks and hails from us to RDR and RSR crew!