Skip to main content
Posted by The DoorwayTo August 30, 2019 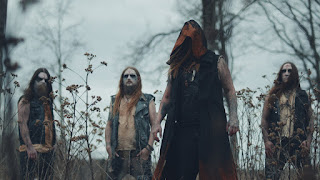 1. I have a Location  question why do you think so many impressive Black, Death and Doom metal bands come out of Sweden . Is it a support scene, good crowds at shows and where does the extremity in music come from?

2. I know that Nattarvet is your second proper Album how does it differ from Ghostland your Debut in the bands words?

It hard to be objective on your own work, but a lot of people seems to think that NATTARVET is more mature and bleak. I think i agree on that. More of melancholy is in focus.

3. You have an interesting Corpse paint presentation it almost like Proggish meets Occultish . How does it help the band bring what Wormwood creats in studio, live and thematically?

I think it enhance the sound in a way. We are not a traditional Black Metal band by the definition, and we don´t wanna be it. But a lot of the aesthetics are Black Metal-ish. Our music does not simply go along with jeans and T-shirt live. That´s why we use make up and custom stage clothing.

4. I hear strong elements of  Folk, Viking, Blues and Avant elements in the Blackened Death Symphonic. I would say bands like  Borknagar, Folkenbach and Old Mans Child come to mind when listening .What bands have inspired you?

I don´t know if it´s a lie or not, but I would like to say that no particular bands are directly inspiring. I get inspired by nature, life in general and a lot of abstract feelings in the first place.
When it comes to inspiration from music i try to get it from bands outside the metal/rock genre. But yeah, i dont really know to be honest.

5. Is there a running them behind Nattarvet?

The big concept is Isolation, Hardships of life and solitude, but a lot is about the great famine we had here in Sweden in the 1860´s

6. from 2017 to now you move from Non Serviam to  Black Lodge label why the change and what have you seen from that change?

7. Are you fans of digital age ( Soundcloud, Bandamp, Twitter, Youtube, Podcasts etc) How has it made extreme metal better or worse in your opinions?

As a band of the modern age the digital platforms are great, and necessary for a "young" band  these days.
Good - opens up for a band to grow and gain fans.
Bad - A lot of shit music is taking over the internet.

8. Are there current bands out there impressing you are the especailly any local acts to your Home Stockholm that aren't getting the press they deserve you would like to chat about?

No metal bands impress me that much now days, exept the old eternal heroes that everybody already know.
But we sure have a lot of good local acts and friends from the Black Metal scene worth mentioning.
That would be AVSLUT, IXXI, NETHERBIRD, DIABOLICAL and many others. We got a quite rich underground scene over here.

9. On that topic to members of Wormwood have other project they perform in currently you would like my readers to check out?

Well, I´m a live guitarist for MÅNEGARM, our drummer Daniel have been touring with DRACONIAN. Vocalist NINE and the other guitarist are doing shows with RIKET.
Each member also have their own side projects of other styles of music for fun, such as Synthwave, Country, Ambient and some Trve Cvlt Necro Grim BM.

10. If you could make a proper video for any song off Nattarvet which once is that and why?

We already did for the tracks "AV LIE OCH BÖRDA" and "THE ISOLATIONIST". Because they are good songs and they tells the story of Sweden in the 1860´s.

11. What is the biggest misconception fans and public have of Wormwood that is not fact or true at all?

Hmm, I´ve just heard some local gossip that was not true.
But I don´t think we´re "big enough" to get so much trash talk or misconceptions surrounding us.
And we always try to communicate well written regarding official WORMWOOD-news.

But I´ve seen some crazy misconceptions in a few reviews when I think about it.

12. How does live vs studio differ for Wormwood and do you prefer one over the other?

It´s two totaly different things. In the studio it´s all about to perform as good as you can as a musician and song writer.
On the stage it´s not just about playing your instrument, it´s about delivering energy and a good show.

13.For the written process does it start with Lyrics , Music or a Theme 1st and do you like to have album ready to go then record or leave it loose and complete it in studio when recording?

It differs from song to song, but like to remember that we had a pretty clear vision about the theme when we started writing,
We had 95% of the record ready when we entered the studio, just a few changes were done there.

14. If it was to all end today for the band what is the one thing you want to be remember for?

I would hope that we brought something new to the metal scene.

15. I have to ask why the name Wormwood as this is a very esoteric item with many storied histories?

The name Wormwood for us can be interpreted in many ways, both the in a biblical meaning.
But we sure have our own mystical reason for picking the name. The plague star.

Thank you very much, stay tuned for future Wormwood news and I hope to see you on the road soon!
Spread the word