Skip to main content
Posted by The DoorwayTo February 25, 2020

The Sludge Lord Recording Artist Postvorta Interview is up 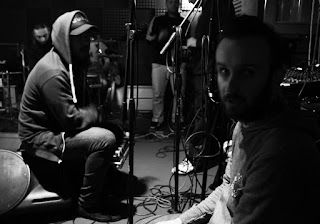 1. Tell us a bit about POSTVORTA what made the band create and become the Post Doom meets Sludge Crust force they are today?

Ciao Clint. The band started with myself (Andrea Fioravanti, guitarist) under a different moniker around 10 years ago. The band was called Black Sound Empire at the time and we released an album called Sisma. Only Raffaele has been with me since day 1. We were much more Post-Hardcore, you know like Glassjaw or Deftones, no growls but screamo stuff etc. Then we changed the name, replaced the singer and Postvorta was born around 2013. Our style shifted completely because we felt more natural composing long songs, more arrangements and stuff.There was no room for the melodies we previously had anymore. The band’s had around 16 line-up changes since it’s started, hoping this one will last for a while. We all listened to Doom and Post stuff but when we started it wasn't easy to write this kind of song like it is today. I mean now we have found a balance and what you hear is our trademark.

2. You were working with Third I Rex up to this release why the move to Sludgelord if I may ask?

Because when we talked to Rob he had no room for us until May. I love Rob so much, I consider him a really good friend and one of the most honest and purest guys I‘ve been lucky to work with. He knew we were in a bit of a rush to release Porrima but he couldn’t help. I literally left the door open for him and I hope we will work together again in the future. On the other hand, we got the mighty Aaron who believed in us from the start and we are happy to work with Sludgelord Records. We knew he was the best solution for us. We hope to also release vinyl with him sooner or later.

3. Italy has been a strong home to Doom and Crusty Punk for many years. How did this inspire you?

None of our inspirations come from Italy. I mean Italian bands are so good in every kind of genre and we have nothing to envy any other country. But what I listen to, what I take as inspiration doesn’t come from here. Fortunately Italy is not only Lacuna Coil, we had (and still have) cool bands like Raw Power or Upset Noise etc… that have been kicking major ass for decades.

4. I hear elements of Cult of Luna, Neurosis, Rosetta, Converge, Oathbreaker, Mouth of the Architect, Venom Prison etc to name a few. Am I even close to influences ?
Well…talking for myself, i’ve never heard of Venom Poison but i’ll check ‘em out for sure. I am not a big fan of Oathbreaker, Rosetta have become a bit boring over the past couple of albums, MOTA are sooo good and I don’t feel we’ve written a single Converg-ish riff ever. In the end our main inspirations are Isis, CoL, Neurosis, Callisto and Sumac. (Edit : I’ve listened to Venom Prison while I was writing..did you really hear something from them in our music???)


5. What is the theme or story behind Porrima?

It’s the third and final chapter of a trilogy based on birth, life and death started that with the album Aegeria back in 2015. We left these scars open for 5 bloody years. As with the rest of our material, the music is very introspective and pretty personal. This chapter is based on the 5 stages of mourning. Lyrics were written by Nicola and as usual, reflect all these struggles. We like to leave it to the listeners to interpret the music and lyrics.

6. If you could make a proper video for any track on Porrima which would it be and how would it look?

You’ll see pretty soon. I am also studying to be a movie director because I feel the need to put down my demons on film beyond music. My goal is to do a movie video for the whole album. It would take time, 86 minutes is always 86 bloody minutes but that doesn’t scare me. It would be a story about loss, about losing everything.

7. Live or Studio where do members of POSTVORTA feel more at home?

Some of us surely prefer the studio, and I am one of those. I am close to hating playing live, I hate to see people and I hate people seeing me, that’s probably why we play with no lights on stage. A record remains forever, a gig doesn't (as long as we aren’t talking about Queen live at Wembley). There are many details that can compromise a performance, from the band or from the audience. Sometimes you have to share the stage with other bands who neither say hi nor thank you when you let them use your backline, which makes the whole experience very unpleasant. Add to that the fake people who come around saying how much they enjoyed the show when you previously saw them having a laugh during your set. Did I mention that I hate people? It makes me sad to say this, but it’s a typical Italian thing. I‘ve never found stuff like that outside this fucking country. I love genuine compliments of course from fans, this must be clear, and I love to talk with people about music and stuff but you have to be genuine and pure. You’ll never see me go compliment or support a band that I don’t like. I personally like listening and seeing a little over a handful of bands which I consider my friends and everytime I can I support them going to their show, buying their merch and stuff. Maybe I also don’t like studio time too much being honest...too much pressure. Composing...yeah, composing is my zone. It relaxes me a lot.

8. If you could have any band cover one of your songs and make it there own what band would you love to see try?

Cult of Luna feat. Aaron Turner, I could die Happy.

9. Visuals and Aesthetics the band seems a bit mysterious over all how do you think the world sees PostVorta vs how the band really is?

Basically we are a normal band who is trying to make it which is almost impossible, so what we are trying to do is searching to spread our music as much as we can, to leave as much music on this planet as we can. Being remembered for something...for our music.I think and hope people see this from us. As I told you before the music remains. We wear black, wearing other bands’ t-shirts like 90% of other Post Metal bands do ahahahah, so nothing fancy. I’ve noticed a big amount of bands trying to do “something special “ on stage when they have nothing special to
say with their music…got tons of examples here in Italy with Italian bands.

You should ask this to who is in the “Scene”. The people who count never invited us to join the party. But if you want 5 words would be: We are shit to them

11. Do the members of POSTVORTA have other musical projects you like to tell my readers about ?

Yes! Mohammed plays with the mighty Void of Sleep (really good band) and he also has his own project called Pie Are Squared. Nicola and Matteo are also in The End of Six Thousand Years. Raffaele plays bass in a post-rock band called Animals at the End. Seppia plays in a grind band called Rusco, and in a crust band called Lambs. I write OST’s for movies and documentaries but also make music for theatre pieces as a solo artist or with Colletivo La Cenere. Seppia and I are currently searching for people to form a new band a la Split Cranium and Baptist, we would love to call it Gape Horn.

12. Social Media, Podcasts and Digital age in general made is better or more a struggle to get through the webs of some many bedroom artists in the 21st Century?

Oh yes, to me that I am an old guy (44 y.o) all this stuff is a pain in the ass, Clint. I came from the tape trading era and I am not comfortable with all this stuff yet. All the bedroom heroes, this Loop Station Generation that have never been on a van, on stage, or recorded an album…they are all words and likes on the page…they could go fuck themselves. On the other hand, your music can spread quicker than the Corona Virus all over the world by a simple click. But as alway it’s not the thing that's wrong, it’s the people.

13. If a Century media or Season of Mist came and offered a deal to POSTVORTA would this be interesting or very happy being with smaller label and have those freedoms?

Dunno Man, we should try. There are plenty of details you should check before signing, I guess. I mean  of course it would be a great thing but the two labels you mentioned for example are too Metal for my taste, it doesn’t mean I would say no be clear. But all the bands we like and we listen to are not signed with those two.. and it probably means we are not for them and vice versa. We have only experienced smaller realities so far and we feel 100% at home. We are pretty free to do whatever we want to, it’s a good feeling. Talking about big names, major exposure doesn't mean major success.

14. What bands and artists are impressing the members of POSTVORTA?

We come from a similar but different musical paths and I don’t feel like replying for the others, who come from grind, doom , hardcore etc. There are some bands that more or less play the same kind of music that we do that we all like of course like: Isis, Cult of Luna, Neurosis, Callisto, Mare, Russian Circles, Sumac, Old man Gloom.

15. Thanks for the time any closing thoughts here

Thank you Clint for this lil chat. People out there please go to postvorta.org and listen to our shit. And if you like what you hear, buy it and help us get booze.