Skip to main content
Posted by The DoorwayTo February 14, 2020

KALT || WEISS Interview is up 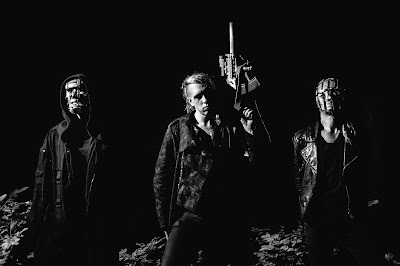 1. The 1st question is...  A Blackened Post Metal Deftones is what I hear, it's so eerie and wonderful did you know right away our voice and style was going to work with KALT || WEISS ?

Actually not at all. At first I only started singing again because i wanted to do a "just for fun" band in the style of deftones and it continuously evolved from that. There are some old demos on my hard drive even with some almost finished studio tracks laid down but in the end i scrapped the whole thing and started again because KALT || WEISS started to take shape.

2. What Bands have inspired this sound I here so music of bands like  D.H.G, Code, Ulver, FEN and Manes to myself . Where do you stand?

Der Weg Einer Freiheit was a big inspiration, Deftones of course, MØL, and i am a big fan of mathcore stalwarts Dillinger Escape Plan who lent a big part  of the dissonant but not dissonant aesthetic.

Yes the name is just a mock name for myself. Ben Weinman of The Dillinger Escape Plan once said DIY does not mean "do it yourself" but "decide it yourself" - to not be dependent or overruled by a label in any creative decision and i want to do it this way.

4. Serotonin what is the theme or story behind the four wonderfully lengthy tracks?

There is no overarching storyline. The theme could be subsummised with "human coping mechanisms". All songs are about damage and what humans do to avoid having to deal with it.

5. How does the artwork fit into the overall idea of the album?

The artwork is a stand-in for the idea of the seductiveness of exposed vulnerability.

6. If someone were to listen to E.P. for 1st time how would you describe it?

Like someone tried to do a Deftones' coverband whilst having a mental breakdown on cocaine.

7. https://kaltweiss.com/  is so damn beautiful and impressive of a site do you think bands need visuals sites not just bandcamp and social media pages in 2020?

Well humans are Augentiere (literally translated as "eye creatures"). I think bands need a website as not to be dependent on social networks (remember myspace?) and to give prospective listeners a single point to instantly get a grasp of what the band is all about.

8. You have several impressive videos how has Youtube changed the game for extreme music in general?

Not that much in my opinion. Youtube def. has made music discovery much easier, but the distribution is still very traditional. Most modern pop acts release singles only nowadays and aim to have a big push behind every single song over one to two months - and extreme music is still in extreme juxtaposition to that and works in cycles. I personally like albums but somewhen down the line extreme music too needs to adapt.

9. Recording does the Story and Vocals Ideas come 1st or is it a musical or riff that takes the band to the start of song or feeling of were the track is heading?

Usually it starts with a guitar riff and then i build from there but it varies. Sometimes it's just a phrase i think feels good. But lately i tried to force myself to produce a beat first and then lay everything on top of it.

10. Visuals or Imagery are they important to a band like KALT || WEISS?

For me visuals are equally important to get "the point" across as is the music. If I would not be able to do the visuals to a level i am content with I'd not do visuals at all.

11. Austria has a strong Doom, Death and Black metal history and many of the bands stand out ( Abigor, Summoning, Pungent Stench, Hollenthon, Dornenreich etc) Do you feel is culture or heritage there that does so?

To be completely honest: not really. All bands you mentioned are def. important but i feel in the last 10 years Austria hasn't had an important act coming up. Of course the culture of "playing in bands" was important when i started doing music but this seems to go away soon too.

12. If you could tour with any band who would it be and why?

13. Do members KALT || WEISS have other projects if so tell us about them?

14. If a Label came to you is it something that interest you like a  Season of Mist or Voidhanger etc someone that is more avant and takes risks with bands ?

If Seasons of Mist or Voidhanger would be interested I'd be delighted to work out a deal that is beneficial for both parties. I am not against labels at all as long as both parties are on the same level and everything is honest.

Thank you for checking out KALT || WEISS and thank you for really researching your questions!