Skip to main content
Posted by The DoorwayTo February 12, 2020 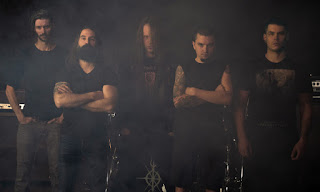 1. There is a mix of SInister, Technical, Melody and Cold Atmosphere's going on with Eclipser . Tell us how this Canadian force came to be?

I think atmosphere is important and although we don’t strive to be a technical band, there are complexities to our sound. Personally I just try to write what I want to hear. Our drummer Chris and I met close to 4 years ago. Neither of us were from around here, we connected randomly through a musician’s wanted ad posted by a third party. Chris and I started jamming and over years we developed what would become the foundation of our sound. It took a few line up changes before we were able to put out a couple of demo tracks to find the right musicians for the job.


2.I even hear some crusty elements mix with this over the top Black Death meets Post Hardcore style. did the early Earache and Relapse days influence you at all?

Yeah it’s weird, we get a lot of genres brought up when trying to describe our sound, but I think that’s likely because we try to avoid limiting ourselves to what we can apply our writing style to. We all enjoy playing extreme music. Our guitarist, Christian, listens to a lot of Carcass, Napalm Death, Entombed - of course the list goes on. There is a certain attitude of aggression and originality that the above labels seem to favour, as well as the appreciation for raw and unconventional stuff, which I admire.


3.Noise Salvation is run by the amazing Fuck the facts how did you partner up with them and get this beast recorded and released?

It’s an absolute honour to have released our first record through Noise Salvation. Topon of Fuck The Facts has a recording studio in Ottawa by the name of Apartment 2 that’s just down the street from where I used to live. We’ve tracked there since our first demo and upon having completed recording Pathos he approached us about the release.


4.Swedish and Finnish Black Death seems to also play a role into the sound bands like Marduk, Dissection, Bathory , Horna  & Enochian Crescent . Would you agree or disagree and why?

There are countless amazing European black metal bands. I can’t say that I’m directly influenced by any in particular, but I do prefer the feel of the techniques used in black metal as a guitarist. Some of our riffs and more brutal elements of our sound may come off as death metal as well. Naturally, people will draw their own comparisons and conclusions.


5. What is the theme of Pathos and how does the art of the album play into that?
There are many themes in Pathos. The album art is based on the lyrics for the title track, which mainly uses biblical connotations to tell a gruesome origin story. It’s basically an inversion of Genesis that focuses on betrayal and violation. We commissioned Misanthropic-Art, who did an amazing job putting the image together. It’s bleak yet somehow powerful, we’re very pleased with the album cover.


6.You Tube, Soundcloud, Bandcamp, Digital media in general how does a band in 2020 get out there to be noticed... Good PR, Live shows, Videos etc ???

Being a musician today, especially in the realm of extreme music, has its challenges. These platforms are all necessary to get your music out there and be heard. I’m horrible at that shit to be honest. I find social media can be disturbing at times, but we try to be as resourceful as possible and reach out to the right people who are better at that sort of thing.


7.Love the mix of guttural and shrieking vocals is that something was the game plan all along for Pathos?

Vocal juxtaposition was always a part of the plan but the studio was also kind of an incubator for a lot of ideas that made their way onto the record. Contrast and polarity is in all aspects of our sound in every instrument. High to low,  fast to slow, melodic to dissonant, uplifting to depressive. It creates turmoil.


8.In 5 words tell someone that has never heard Eclipser what are they are about to witness Aurally?


9.What is the current scene like in Ottawa CA are there any bands the world should be taking notice to Locally that we are not?

We’re not very involved with any scene. There are some amazing musicians here, I do know that much. Ottawa doesn’t seem to have as much appreciation for heavy music in comparison to cities like Toronto and Montreal. I love it here, don’t get me wrong, but Ottawa has a unique demographic that is largely involved in the government sector and I believe that has an effect on the music scene. We do have a few great venues that put on solid shows and we are grateful for those who come out to see us play.


10.What music or books are impressing the members of Eclipser in 2020?
I recently finished reading The 120 Days of Sodom by Marquis de Sade, Industrial Society and Its Future by Theodore Kaczynski, and I’m currently reading The Epistulae Morales ad Lucilium by Seneca the Younger (to name a few). We’re all constantly reading. I know for me personally, I draw more influence from the books I read than the music I listen to. Our tastes in music are too eclectic to make much sense of.

11.How does Image and Visuals play a role into Eclipser and to draw fans to you?

We try to let the music do the talking. That being said, people have a way of listening with their eyes. We serve the songs the best we can with our live performance and recordings. We like to keep the bullshit and theatrics to a minimal.

12. What one thing fans of the band would not expect from the members of Eclipser?

13. If you could make a proper video off any track on Pathos which would it be and how would you want it to be presented?

14. Do the members of Eclipser have other musical outlets you would like our readers to check out?

15. Eclipsers seems very much about tones and atmospheres . If the members were not making music what other creative outlets do the members have?

Although I would consider my band mates in Eclipser some of the most creative guys I know, I wouldn’t want to imagine a world where that creative energy wasn’t being focused on music.

16.Thanks for the time any closing thoughts here .

Thank you to anyone who has taken the time to listen to our music.