Skip to main content
Posted by The DoorwayTo March 24, 2020 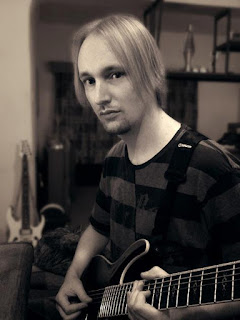 1. Gary this is Nuclear Winter 1st proper album how did night shift come to be?
After the first album I did in 2013 called Ghost, I had a better idea of what I wanted to produce, as well as aiming to improve on it. Ghost was a good album in helping see what worked best and what should come next.

3. What is it like being extreme metal artist in Africa what is the response like in your nation of Zimbabwe?
The metal community here is really just a handful of people so it’s definitely not the ideal place for such music. Dividing the Element (fellow metal band here) have done a couple of shows and the small crowd of metal fans really seemed to enjoy it. But really metal is not going to do well in this country.

4. Why DIY and not seek a label the album was well produced and sounds stellar? Was it better just get good pr and expand the name to the world?
For me it was just easier to try and do it mostly all myself. I had a day job and would focus on recording in my spare time - and I enjoy mixing as well, so I just did it as best I could and hoped someone would like once it was online.

5. There is a melodic Death meets electro industrial black death vibe here what is the overall theme of Night shift?
With night being the time when negative things can play on your mind, your thoughts can become a bit pessimistic and things can seem hopeless.. So the lyrics cover some of those darker things like death and failure, as well as some philosophical stuff.

6. How does the art tie in to it all?
The title, and with the overall sombre lyrics, I thought a big moon over a cemetery was quite fitting. But beyond that dark setting there's perhaps something more/better so thats why there's the nice mountains in the background and clear sky showing constelations.

7. Was it a one-man creation due to not many into this style were you’re from?
It was partly that yes but also just me wanting to see what I could do on my own without having to rely too much on other people. I like having the control lol, and not having to deal with someone else saying it should be like this or that.

8. If you would make a proper video off the album which track and how would you like it to look?
I’d probably most like to use the Western Gate and have a misty dark setting around an old cathedral or old gothic building with visions or flashbacks to the girl that’s being sung about.

9. How does things like bandcamp, podcasts, youtube and facebook change the underground music game for an artist like you?
Without social media it would make it much harder to get music out there. I think they are essential to helping unknown artists get some exposure.

10. Are you interested in making Nuclear winter a live touring project or never even a thought?
It would be really great to get to that at some point. I can’t see that happening though in the near future. My main focus will be to work on a new album – which probably will take a couple of years at least (seeing a work as a 3d designer as a main job and can only work on music in my spare time)

11. What has the feedback been for the album up to now?
I’ve been quite amazed at the positive review it’s received. I didn’t expect Night Shift would have received such high ratings on some reviews. There were some bad reviews though but those are just as important I think. I like to hear about where things can be improved and a common note was that a live drummer would definitely improve things. I’ll see about getting a session drummer for the next full album I do.

12. Do you create music outside of Nuclear Winter if so tell us about it and how does it differ?
No, I generally put all my musical effort under Nuclear Winter. Although I did the mixing for Diving the Element’s last album.

13. In 5 words how would explain the style of Nuclear Winter to someone about to listen for 1st time?
Industrial edged melodic death metal

14. Thank for the time any closing thoughts here.
Sure! Thanks for contacting me.
Maybe look out for my new EP.. StormScapes - which should be out in May