Skip to main content
Posted by The DoorwayTo March 10, 2020 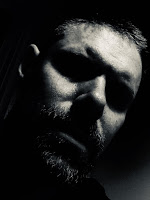 
The name was taken from Romans 5:12 (or ROM V:XII) “Therefore, just as sin entered the world through one man, and death through sin, and in this way death came to all people, because all sinned”. It seemed fitting for a one man project portraying the darker aspects of life and death through sound.

2.The mix of Occult Power Electronic, Harsh Drone and Almost Black Noise at times is a great surprise. I hear Valefor,Nordvargr,Section 304,Trepaneringsritualen , In Slaughter Natives and Havoc Unit when listen what inspired this album?

I wanted to incorporate a more rhythmic element in my sound making then what I had done previous with Deadwood, but still manage to keep the atmosphere the same. This album was initially intended as a new Deadwood album. But when it was done, I knew it was meant to be an entity of its own.  So this will be my go-to solo project from now on. For sure I was inspired by most of the bands mentioned above but also Author and punisher and MZ.412 (maybe included in the Nordvargr reference mentioned above?) played a big role in what I set out to do with this album.

3.Sweden seems or was at one time a hot bed for this extreme music and aural terror like this why do you think this to be?

Hard to say why that is. Might have something to do with the emotionally supressed climate that we Swedes grow up in. Any sign of emotion positive or negative is frowned upon. Or maybe its the climate in general. Most countries with a lot of cold, snow, rain and just a few months of sun people seem to be a bit more creative. Maybe its because we are forced to stay indoors so much that we have no other choice. Its either finding an outlet or to end it all.


4. Is there a running theme for Rom, Rune and Ruin Album?

Not a theme really, but many of the lyrics were inspired by old Norse sagas and runes. I was reading a lot about this at the time when I started writing the lyrics.
But some of them are just moments of loathing that I needed a release for and were put to paper. The track Djävulsögon is a re-interpretation of the old Blodulv song with the same name.

5. This maybe out of line but why Aesthetic Death a great label that is more Dark Industrial, Doom, Black and Death metal. This would seem a bit more home at places like Cold Spring, Malignant or Old Europa Cafe?

First of all, I have to say I am extremely pleased that Aesthetic Death decided to put out the album. Stu is one of the best and easy-going individuals I have ever worked with. He really puts the band first in every perspective, and I hope I will be able to work with Aesthetic Death again in the future. I was in contact with a bunch of labels regarding the V:XII album including the labels mentioned above. And one question was timing. Aesthetic Death had the means to put the album out within a few months and if I went with another label like the labels above, I would have to wait over a year to get the album released. And, I like the fact that it’s not on a “Death Industrial” label. I feel like the album extends past the boundaries of Death Industrial and would be appealing to people into extreme metal as well. This is a great way to reach that audience.

6. Visuals and Aethetics are very important this very underground soundscape material how do you want V:XII to be seen and how has the art of the new album band that so?

Again, I wanted something that was appealing to both the Death Industrial crowd as well as the extreme metal community. So I had Max Winter (Teratogen) to do the artwork. He usually does designs for metal bands, but I think he did a great job with the layout. I sent him my tracks and the lyrics. And I let him come up with his interpretation of the music.

7. Why the Demise of Deadwood to V:XII and what are you hoping for with this new release?

Deadwood will most likely live on, but the music will lean more towards a Black Ambient nature in the future. Not as structured and noisy as V:XII. I have never been that productive with Deadwood. And it will be few years until a new album, but it is in the starting process.

I am extremely happy with the turnout of the new V:XII album and I hope this is the beginning of something great. The question is yet to be answered on how the album will be received by the people, but I have high hopes that this album will get a big following. I have not been this inspired in years and I feel the urge to produce new tracks all the time. But life always has a way of being in the way and we all must prioritize. Right now, my focus is on writing lyrics and recording vocals for the upcoming CULTED album that will be out on Season of Mist as soon as we are done. That said, I have almost an entire V:XII album recorded and on hold, its vocals and mixing left but this will have to wait until my other obligations are taken care of.
I only have so much time.

8. Will you be performing live with V:XII or is this just a studio creations?

Don’t know yet. I think I would consider preforming with V:XII under special circumstances.

9. I know you also release material under Culted (Death Doom Band) do you feel Extreme metal and Occult Industrial/ Noise are ships crossing in the night and many fans are into both even if they dont often talk about?

Now a days everything is so easy. Its almost just about streaming and digital media (even if I prefer CD and LP), and everything is just a click away. So I think most people into extreme music is pushing the boundaries and getting into all kinds of new genres of music that they never would have in the past. So yes, I think people into extreme metal listen to both. And vice versa.

10.Are there any albums in 2020 currently Impressing you Daniel?

Not that many albums in 2020 so far. I’m still stuck in 2019 at the moment. But worth mentioning so far in 2020 is:
Christian Kjellvander och Tonbruket-Doom Country
It was a pleasant surprise.

And I have high hopes for the new Khost album Buried Steel, that should be a killer album.

11. If you could make a video for any track off the new V:XII album which would it be and what do you want the end result to look like?

The song Maðr would be my preferred choice, I think. A collage, ranging from the Occult to the destruction that man brings to the world would be well suited as a visual for that track.

12. Social Media, Digital media outlets how has this all changed this underground from when you started and are you better off now or then?

Long gone is the tape-trading underground I grew up with, don’t know if it’s a positive or a negative. A bit of both I guess? It’s harder to sell physical copies of your art but on the other hand you have the ability to reach a much broader audience through digital platforms. For me it doesn’t really matter, I do this for myself. Music provides and outlet for me to be creative and get rid of some of the demons that haunt me. I have no ambition to live of my music and for me that’s a good thing. That keeps me producing the music I want to listen to myself without having to care that much about what other people think and what sells copies. Compromising only leads to self-loathing in the end.

13. Thank you for the time any losing thoughts here