Skip to main content
Posted by The DoorwayTo July 25, 2019

Godreah Records Artist- The Meads of Asphodel Interview up 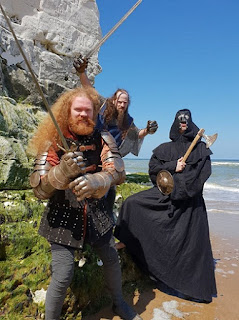 We usually release a split/  or mcd between albums as the writing process both musically and lyrically for our albums can take a few years to get right.  Especially the, Murder of Jesus the Jew, and Sonderkommando, albums. These were heavily researched and as they are based on actual events, it needs to be lyrically as accurate as possible.
The new album is a more free and fluent, flirting with world misery and sanctified violence, as per usual but not constrained to a specific time line or historical event. Whereas the previous Sonderkommando album was extremely laborious lyrically, suffocating dark and atmospherically bleak, this new album was like entering the sunlight and we had a blast making it.


2. Symphonic, electronic, folk , savant & extreme metal these come with a strong fantasy element. How would you describe, The meads of asphodel to someone about to listen to Running out of time doing nothing?

Experimental, unique and perplexing, yet if you listen carefully there is method to the madness. Our music has always from the start been created with melody and a collision of hot and cold atmospheres, harsh and clean vocals and pretty much everything else in-between. We do what we do and whatever is born is what it is.

The music has changed little to how we used to create the songs 20 years ago. The main difference is the tightness and musical ability that strengthens the compositions. We have had many guests since the early days, Hoest [Taake], Vincent Crowley [Acheron], A.C. Wild [Bulldozer],  Huw Lloyd Langton [R.IP], Mirai [Sigh], amongst others.
I would like to mention Rob Miller [Amebix/ Tua  Cross] who has just been ridiculed in a shitstorm due to his citing a Holocaust denier in the new, Tua Cross albums credits. Well, he did some vocals on our Sonderkommando album, and he knew the album was on the validation of the holocaust and the suffering of the Jews therein. He did not dismiss it as a fictional event... Rob is not a holocaust denier; he is an academic absorbing knowledge of all sides to a brutally lamentable part of History. It is a shame people without any background of the events have ripped him to pieces..

Our foray into exploring religious myth, human atrocities and supernatural humdrum is still as strong as it was when we started. We are wiser and more focused even if we exist in an industry grinding into despair.

4. You have worked with Supernal, Candlelight before current label Godreah how has it differed and why the change between labels?

Working with labels basically helps to enrich the label and benefit the band very little financially if you are an underground band especially. The days of labels for this kind of music are dying.  Most bands can self promote and own their own music nowadays without selling their art to a label to do what they want with it. Godreah records do not wish to own our music and have been around long enough to have the respect of the underground and beyond.

5. How has the Digital age changed the bands way of creating and promoting The meads of asphodel?

The digital age has fucked music up the arse and only the younger generation who think its normal to download music for free will argue against that. We started in the days of tape trading, when music was worth something. No music is becoming worthless as the art is being lost to a digital format.  If you get your music illegally then what value are you placing on the music? The answer is fuck all.. and you are part of the cancer eating away at its soul.
This creates the bedroom bands that are everywhere, making music and selling it digitally and not really caring if they make money. This saturates into the scene and devalues it even more.
But, that is how it is and nothing will change so we do what we do until we can’t be bothered anymore...  We were privileged to know music when it was more personal and a greater comradely in the underground gave a more personal connection.
Now we have to endure the social media thoughts of countless morons who would otherwise exist in their own sad miserable lives. Who the fuck wants to know the thoughts of stupid people??


6. What bands are inspiring you?

From the beginning we have been inspired by many bands from many musical genres. From my perspective,  Hawkwind, The Doors, Sigh, Bal Sagoth, Bathory, Uk punk and even the Dandy Warhols. James has an even wider musical palette that is anything and everything basically.


7. What is a live performance like for band and what do you want the audience to get out of it?

This is the mystery yet to become unravelled.


8. The music is so layered and complex. I hear alot of similarities to bands like Bal Sagoth, Fleurety , Arcturus and D.H.G. would you even say these are some kindred spirits?

Bal Sagoth influenced my ideas of narration, and spoken passages,. None can emulate Byron for this, and his use of English verse is second to none. Sigh influence my very early song creativity as they are the masters of the absurd.  The band arose from the creative energy of the preceding Norwegian black metal explosion, By the time the Meads released the first demo in 1998, we had witnessed the awe inspiring works of Arcturus, Ulver, Gehenna, Fleurety, Satyriocn, the list goes on and on. It was a remarkable rich musical vein of the likes we shall never see again.

9. What is the biggest misconception fans have about the ideals or themes of the band?

On occasions we have been called racists due to our music titles. We ahve a song called ‘Jew Killer’, from the Murder of Jesus the Jews, album, that is basically about Pontius Pilate the Roman Governor of Judea who condemned Jesus to death. He was a Jew Killer, so the song is an accurate descriptive, and yet for some who do not bother to research our music they call us racist.  Our Sonderkommando album, also treated a very toxic subject in the Metal scene with historical fact and respect, and we still got shit from some ignorant dickheads..


10. Is this style music better set for smaller labels or do you think with more promotional push it could grab larger interest?

Music can reside anywhere. I have heard crazy music on huge labels from Tangerine dream, Frank Zappa, sonic youth, etc, I have heard great music in the underground and utter shit music in the mainstream. Music is subjective and can attract a huge fan base in the right circumstances. Some through merit, others by chance, like Mayhem and the Norwegians who rose to prominence through murder, church burnings etc. Would the Norwegian scene have been what it is without this nucleus of violence?/  I doubt it..
Promotion is for sure a key factor in getting a band known, but the music has to merit the hype.

11. Is there a running theme on Running out of time doing nothing?

Human idiocy, cruelty and self immolation. Running out of time doing nothing, is something we all can relate to, and the human race seems to do this without learning from mistakes that reoccur century after century. The album has a lot of personal stuff weaving within the lyrics, personal loss, frustration and despair when I view this world. But the world is no different than it was 1000 or 2000 years ago. We still wage war, we still commit the most terrible acts of violence to each other and we scurry around like ants under the direction of tyrants and self serving politicians.  Maybe this is the way for us humans.....

12. If you could make proper video off and track on new album which one and why?

We have a video of, Running out of time doing nothing, and this pretty much sums up what this band are about. A video of, I Stood Tiptoe, Reaching Up For Heaven, would be a very politically incorrect visual head fuck. Maybe we will do it....

13. You website https://www.themeadsofasphodel.co.uk is beyond visual and impressive to say the least. How did it come about? More bands should have a canvas like that?

James has created the website. A wealth of information and merch. He toils away daily with new ideas for music, the web page and other musical endeavours he has with, Baphomet's Cunt, and Ebonillumini.  He is a force of inspirational creativity.

15. Thank you for the time any closing thoughts here.

We can only thank you for your time and interest in the music.
We wish you well