Skip to main content
Posted by The DoorwayTo March 23, 2019 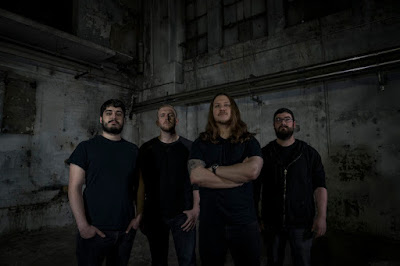 1. Tell about Hath to my readers.
Pete: Hath is a 4 piece metal band from NJ that mixes black, death, and prog metal. We self released our first EP, "Hive" for free in 2015 and our first LP, "Of Rot and Ruin" is coming out April 12th on Willowtip Records.

2. I hear more epic black death then straight death metal ..Would I be mistaken ?
Frank: I think that's up to interpretation. We don't like to label things too much, since our opinions of the material obviously is different from the listeners'. I can definitely see why you'd hear that, so you're not mistaken.

3. I'm originally from NJ left in 1998 what's the extreme music scene like now?
Pete: I live as far north in NJ as you can go. The scene up here is pretty sparse compared to New Brunswick or south Jersey. Venues like The Meatlocker and Dingbatz are still holding on but a lot of bands opt for the NYC instead. I spent a lot of time in New Brunswick's basement scene and that's still as active as ever. South Jersey and the Philly suburbs have been great for bands over the last few years.
Frank: There are a ton of bands popping up in the South Jersey are that are pretty heavy. It seems to be only growing and I'm pretty excited about it.

4. How did you hook up with an amazing label like willowtip? They seem to work with fringe prog and tech death mostly..
Frank: Pretty simple, honestly. Willowtip reached out to us through email/Bandcamp messages after listening to our first EP. The rest is history. A LOT of bands that we love or have influenced us have been on Willowtip, actually.

5. What's the theme behind " of rot and ruin"?
Frank: There are a few. Endings, loss, demise, negligence and regret. Death metal stuff.

6. What bands are currently impressing the members of Hath?
Pete: Lately I've been listening to The Ocean's new album, "Phanerozoic I: Palaeozoic" and Black Crown Initiate's discography. We also just wrapped up a tour with Cognitive and Micawber. Both bands are stacked with phenomenal musicians.
Frank: Pete picked some good ones. We've been following Slugdge for several years now. I'm obsessed with Tribulation and have really been into bands like Svartidaudi, Mgła, The Great Old Ones, and me and AJ have been digging Leprous.

7. How does live differ from the studio for Hath?
Frank: Live there is a lot more energy, I think. We prefer to just get straight to the music, one song to the next. We're not gonna preach to you between songs.

8. Do the members of Hath have other musical projects they would like to talk about?
Pete: Frank, AJ and myself have an instrumental death metal band called "Ophidius". We have 2 EPs posted on Bandcamp that you can download for free. AJ and Greg are also in a pop punk band called "The American Standard". They have 2 EPs online and are getting ready to start recording a full album.

9. Vinyl or digital which do you prefer and why?
Pete: I prefer digital. I can appreciate vinyl but I don't like buying physical media.

10. How does 1st ep differ from Of rot and ruin?
Frank: The first EP, Hive, had a concept connecting all of the songs, and the song writing process was different. One of the songs was written in about a half hour between me and AJ. For the writing of Of Rot And Ruin, I lived in a different state for most of the time. A lot of that writing was us sending ideas back and forth, so the process was slower. I think it actually helped because each song has its own clear identity. Also the new album is much more intense, in my opinion.

11. How have things like bandcamp,  soundcloud and reverbnation changed the extreme metal underground?
Pete: Overall I'd say its changed things for the better. I'm a huge Bandcamp advocate. They've all made it so easy to post and sell music and merch compared to how it was 10+ years ago. The other side to that is now there's so much music available that it can be overwhelming trying to keep up with new bands.

12. How does the album art speak too new album ?
Frank: It depicts a scene of absolute ruin, the end of a cycle of life, but in a bright light. It's not obscured. It fits the themes of the album while remaining eye-catching.

13. If you could cover any song and make it you're own, what would it be and why?
Pete: I really want to do a project where we cover super heavy death metal songs in the style of The Rat Pack. The first cover would be "Hydra" by Fit For An Autopsy. I feel like "when you cut off the head, fucking two grow back" would work really well sung in the style of Frank Sinatra with a big band backing it.
Frank: I have strong opinions against cover songs in general, but I have wanted to try a heavy version of Opeth's "Moon Above, Sun Below."

14.Hath very interesting name why was it chosen?
Frank: The first time I thought about using it I just kept bringing it up. It spoke to me. It's a great sounding archaic form of "have" and I like the idea of our name being a form of possession.

15. Is imagery important to a band like Hath?
Pete: I don't think so. Yea we're a death metal band but we like to keep things easy and don't take ourselves too seriously. You probably won't ever see us in fancy outfits or wearing corpse paint.
Frank: I think a band can be whatever they want, but in my opinion they should be consistent while doing so. I don't need to see a super true black metal band having a selfie contest on Facebook, or a band dressed in a clear gimmick but there's one guy extremely out of place.

16. Thanks for the time any closing thoughts here..
Pete: Keep supporting bands! Buying some merch or an album and spreading the word really does help. "Of Rot and Ruin" comes out April 12th, on Willowtip Records. Thanks for talking with us!