Skip to main content
Posted by The DoorwayTo May 12, 2017 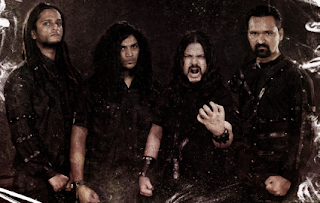 1. I  know the band has been around a while and worked with Candlelight Records. Tell us a about the bands past history.
DS: I started the band when I was 16 years old. I had no members, it was just me and a bunch of songs but I knew the band was ‘Demonic Resurrection’. For a while I searched for members with no luck and finally when I gave up all hope and decided to take my PC on stage and play along with it, I managed to meet an old school friend who knew another friend who had a drummer and before I knew it I had a line-up and we played our first gig on 6th April 2000. Since then there has been no looking back. We’ve gone through more lineup changes than I have fingers and I’m still here with 5 albums and an EP under my belt. We’ve played Wacken, Sonisphere, Bloodstock, Metal Days and many other festivals. We’ve toured all across India and we even won a Metal Hammer Golden God in 2010. It’s been one crazy ride.  And I think this is just the beginning.
2. Your new album Dashavatar has elements of bands like Orphaned Land, Dimmu Borgir, Ihsahn Nile, and Arcturus in the way I hear it. Where did this mix of Oriental, Symphonic and Black Death elements all come into focus for the band?
DS: The musical style of the band has evolved over the years especially with the change in line-ups where certain members have had an influence on the sound and direction of the band. However at the core we’ve always been a symphonic death metal band. With this album because we dived straight into mythology we used elements and instruments that made sense for the songs. We didn’t go overboard with it, everything had a place in the album.  I guess this is just the evolution of our sound.
3. Your Working with Transcending Obscurity now as a label how did that come to be?
DS: I’ve known Kunal for years now and we’re not signed with the label but he is handling all our PR. He’s extremely hard working and I trust him to take care of the band and do the best he can for us.
4. The album cover for Dashavatar is very impressive how does it play a role in the theme and story of the music and lyrics of the album?
DS: The album is about the 10 avatars of Vishnu the god of preservation in Hindu mythology. Through these 10 stories he takes different avatars to restore the cosmic order. So we spoke to Reuben who designed the cover and we bounced around a few ideas and this is what he came up with. He kind of morphed all the avatars into 1 to represent the stories best.
5. India seems to be a growing Metal Kingdom do you have many places to perform? What is the scene like there now?
DS: Finding venues in a few cities is easy but overall it’s still a very new scene and there is a long way to go. There are lots of metalheads but they are very young and therefore don’t come for shows much, also music and merch sales aren’t great because of that. However it’s a very passionate audience and it’s always fun to play in India for most bands. Maybe in time things will get better.
6. If you were to have a band cover one of your songs who would you want that to be and why?

DS: I think I would honestly be very interested to hear a non metal band cover one of our songs because it would be a totally different take on things. If I have to pick a metal band I’d love to hear Dimmu Borgir with the Orchestra and Choir covering one of our songs. That would be crazy!!

7. How does a Live show differ from an album release for Demonic Resurrection?
DS: Right now it’s just different members because we keep having line-up changes but it’s a pretty intense live show. It’s not very fancy, no gimmicks. Just a band playing metal.
8. If you could make a proper video for any track of Dashavatar which would it be any why?
DS: We actually released a music video for the song ‘Narasimha – The Man-Lion’ which is on Youtube at https://www.youtube.com/watch?v=DVQkEAdVwUU – We would love to make more music videos and definitely ‘Vamana – The Dwarf’ and ‘Parashurama – The Axe-Wielder’ would be the ones on the cards.
9. What bands and musicians are impressing  Demonic Resurrection currently?
DS: I’m currently listening to Benighted, Obscura, Persefone, Aborted and lots of other stuff as well. Too many to list.
10. How has social media and digital sale age changed indie extreme music in 2017?
DS: I guess in some way, it’s easier for fans across the country to get access to the music. At the same time it also means more downloading and less sales and that is always bad. I guess it’s a doubled edged sword and we have to adapt and work with what it is.
11. Do the members of Demonic Resurrection have other projects? Let us about them if so.
DS: Currently Nishith (guitars) and Viru (drums) are both professional musicians so they have lots of big commercial artists who they play for as sessions musicians and they do sessions work as well. I have 2 side projects, Reptilian Death which is death metal and I play drums and I also recently released a solo album which has George Kollias on drums.
12. Thank you for Interview any closing thoughts place here..
Ds: Thank you for having me, I hope people will check out the new album and enjoy the music.