Skip to main content
Posted by The DoorwayTo January 13, 2019 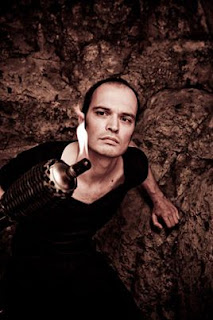 1.  Unterm Gipfelthron is you're third proper album. How did this pagan black viking sound come to be?

It was a difficult decision actually. The material for this album as well as for the „Spukgeschichten“ split with Hanternoz and Tannöd was more or less ready in 2017. At first I wanted to use „Zwischen den Jahren“, „Unterm Gipfelthron“ and „Gebirgsbachreise“ for the split. That would have been logic, „Ewiges Morgenrot“ and „Der Einsiedler“ somehow create one picture with „Ein Raunen aus vergess'ner Zeit“ and „Winter zieht übers Land“, but these songs together would have a lot of meditative atmosphere without a lot of remembering effects or catchy melodies. So I decided to combine two of the atmospheric songs with the more Pagan-oriented material, in order to show a broader horizon on the album. Closer to the true spirit of Rauhnåcht are the two songs of the split and the final two songs of the album though.

2. Your were on Hammerheart a once mighty pagan metal label  . Now with D.M.P  one the best avant metal labels out there why the move.

I did not feel much support or interest from Hammerheart, there was not really a close contact after the release of Urzeitgeist. I knew Phil and Debemur Morti already from my works with Wallachia, so I sent him the new album and he liked it. He really has his own taste and signs bands only according to his taste and feeling, not according to current trends or commercial aspects. I respect that a lot. Furthermore I have some friends in France and have good experiences with this country, so it felt like the right decision.

3. Is there a theme to  Unterm Gipfelthron?

It is an album about nature and the metaphors one can find in nature and its cycles. We are part of these cycles and can find everything that we find in nature also in ourselves. When nature falls asleep, it is also a kind of cleansing, the snow might cover things that you don't want to look at or that you don't need anymore. Every new birth already carries the seeds of decay and every decay already dreams of the next metamorphosis.

4. What bands influenced you?

I think, without Bathory I would not have started to make music the way I did. „Hammerheart“ is for me still untouched as first and best Pagan Metal album of all times. My main influences were set when I was 13, 14 and listened to the upleashed second wave of Norwegian Black Metal, but also to bands like Tiamat and My Dying Bride. At the same time I was also into classical music, Jean-Michel Jarre and Vagelis, the great pioneers of Synth music, and Dead can Dance. I think you can still hear those influences now and then in my music.

5. Do you prefer to be a one man musical creative force ? Or do you just collab on each album as you like?

I compose and arrange everything the way I like and only when I feel that my own skills are not sufficient or an instrument does not sound well enough as a sample instrument, I work with session musicians. This usually embraces drums, choirs and some lead instruments like clarinet and flute on the current album. But right now I practise the drums again, in order to be independent from session drummers.

6. If you could make a video for any track on  Unterm Gipfelthron which would it be and why?

Probably the title track, because it is a tribute to my beloved mountains of my home region and I would only need a lot of good sequences of my bike and hike tours. Maybe I will do videos of this kind on my YouTube channel soon.

7. I love the pagan folk elements are they thought out in advance or added as the song structures build?

It depends but I think more often in advance. Sometimes I start with a sample, a tune from a synthetic folk instrument or one of my world instruments. Recently I bought a harmonium and a tanpura, for sure they will be heard on future releases. What I really like is to start with a short pattern that is very characteristic in sound and atmosphere and serves as a beacon for the whole song.

8. In 4 words describe  your bands sound?

9. How has social media and digital media changed  underground metal over last decade?

I would name a longer period than a decace, even more than 15 years ago, cause there was already Myspace and the first filesharing platforms. When I began, there was nothing. You got information on flyers that were sent together with the tapes you traded all around the world. Typewriter-lists, glue on the stamps to re-use them, international reply coupons, this had real charm and it demanded some more effort than a few mouse clicks. Also it was possible to listen to everything that was released on demo or album and was named Black Metal, because there was no bedroom studio with a laptop and a guitar, no copy/paste and when you had a drum computer, he was named Roland and could be easily identified. So, it has changed from both sides, many fans became lazy consumers who don't have the same fascination and dedication as the veterans, and many bands became lazy musicians that hide their limited abilities behind modern production and editing methods. And, you can tell me what you want, analogue will always be better than digital, from an artistic point of view. Also I must say that part of my personal fascination came from the fact that you really did not know a lot about your heroes, I mean, it took me a year to even realize how this guy called Quorthon looks like! Today, everyone lets you know things you don't really want to know and posts comments like „this evening we will announce something cool and thanks for 500 likes“. Well, if you want to get attention, you have to do it this way, but the way I was „raised“, Black Metal is not about playing the attention whores. Okay, please excuse, there are exceptions and of course there are also very talented and crafted modern bands out there, no doubt! But in general I lost connection to the scene many years ago and due to the mentioned reasons I think that I would not feel the same fascination for this whole music (which was really more than just music in the early 90ies) if I was 14 years old nowadays. But the feelings I have stored inside are still preserved and the flame is still burning, so I just do my thing and follow my inner drive.

10.  What is the extreme music scene like in Austria  currently? Are there any local acts in your area that stand out you would like to talk about?

As I said I am not really into the scene and don't follow bands. Also I don't listen to extreme Metal apart from the projects I am involved in or the productions in my recording studio. In case somebody is interested, I am „ghost writing“ for a band called The Negative Bias from Vienna, this is a quite decent mix of old and new school Black Metal.

11. What bands and artists are impressing you currently?

Maybe I can mention Heilung, I like this very archaic Viking Folk a lot. The last Black Metal band that impressed me was Evilfeast from Poland. Apart from that I listen a lot to timeless music, be it classical music, be it Folk, be it electronic stuff. I am also into Ambient and music for meditation, I produce a lot of that myself.

12. Does RAUHNÅCHT perform live or do you ever want too?

In the early years of the band, two live gigs took place but I was not really satisfied on a musical and, of course even more important, on a personal basis. I never say never and I am still open for playing live, but only when I have really good session members that also share some basic ideas of lifestyle with me. I have one or another guy in mind, so maye something can happen some day.

13. Thank you for the time any closing thoughts here please..

Thanks a lot for the opportunity to be featured in your magazine! And thanks to all people out there who listen to my music and share some of the emotions that I had when I created it.