Skip to main content
Posted by The DoorwayTo September 17, 2018 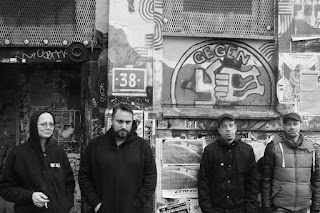 In the early 2000s, Philipp and Alfred had an Industrial-Punk band called “Phal”. In 2006, we decided to join forces with Dion’s Ambient solo-project “Projekt Angst” – hence the name. Shortly afterwards, we decided to add a bassplayer, Kev, who played with us until 2015, when he was replaced by Julia.

2. Over the course of several albums how has the sound changed to were you are at with Phase IV?

In the beginning, especially on the first album, we had a heavier sound, doomy riffs combined with slow-downed breakbeats and growling. Over the course of the years, we became more melodic, went more in the direction of post-rock and added a metallophone. Nowadays, we even call ourselves pop sometimes ;-)

3. I hear elements of Cold Meat Industry, Cold Spring, Metropolis and Play it again sam labels I want to say you are a mix of Mogwai, Pigface, P.I.L. and Black metal. What do you want the listener to get out of all this?
Generally, we try to spread certain moods with our songs, which aren’t always on the happiest side of life, as you might guess. Our artistic influences also mostly deal with dark aspects of human life. As of late, though, there have also appeared more hopeful elements in our music.

4. You are from Austria what kind of scene is there in Vienna and how do you fit in. Is there still a strong Electronic/ heavy Industrial scene still?

We don’t really fit into one certain genre or scene, but are befriended with many different bands from Vienna. There are lots of electronic acts in Vienna, ranging from commercial drum and bass to underground noise. Generally speaking, there is a quite active underground scene in Vienna, although not too many Industrial bands.

5. Bloodshed666 I know nothing about this label how did you come to work with them?

Coming from the DIY-Punk-scene, Alfred founded the label back in 1998 as a vehicle to release his own music. Since then, the label has released some records, mostly by our own or befriended bands. In December  2018 we will celebrate its 20th birthday.

6. Are the members of Phal:angst fans of the new Digital age ( Bandcamp. Youtube, Blogs etc) or miss the old more print and face to face media?

Both, I guess. Since we aren’t the youngest guys and gals anymore we used to read or even contribute to underground fanzines, and yeah, sometimes we miss some of those. But you also can’t deny the practicability of digital media in terms of spreading our music.

7. How does the album cover of Phase IV play into the theme of the album?

We just wanted to have an album cover that reflects the general mood of our sound. It was a difficult process, but after months of researching and discussing various images, we are now very happy with the look of the record.


We’ll have more videos to the album soon: „The Books“ (JK FLESH remix), „Despair II“ (DÄLEK remix) and maybe also one for the original „The Books...“ song and „Comeuppance“. We love films & videos. We also have visuals at our live shows. But it’s a lot of hard work...

9. Does Image play a huge role in bands like Phal:Angst?

We can only speak for ourselves, I wouldn’t call it huge. Since we use visuals at our shows we try to combine certain images with our songs. Apart from that and our cover art, it doesn’t really play a role.

10. What is a live show for Phal:Angst like? How does or would it differ from album?

We use live-visuals during our shows, which turn them into audio-visual experiences. Or at least we hope so ;-)

11. What bands are currently impressing the members of Phal:Angst?

12. What does the name Phal:Angst mean as band name ?

It doesn’t mean anything, it’s just the abbreviation of our names. Dion’s solo project was called “Projekt Angst”. Julia has claimed the "Doppelpunkt" (":") as it is also an element of the bass clef.

13. Do the members of Phal:Angst have other projects they play in ? if so tell us about them?

Alfred has a solo project called “Beauty Lies” (Dark Folk) and plays in the stoner-sludge band “Cyruss”. Julia also has an experimental solo-project, “The Bassenger”, plays in "Carosellis"  and loves cooperations/ impros with various artists. Philipp sings in the choir of “Saloonies” (Cow-Punk). Dion theoretically has his solo-project „Projekt Angst“ but has not been active for a few years.

14. Thanks for the time any closing thoughts

Thanks a lot for having & supporting us – very much appreciated!