This would be the third release for Doom metal force Pantheist on the Firebox labels Extreme doom sublabel. Pantheist has gone into more atmospheric side of the doom realm with Journey through lands unknown. This Belgium by way of UK now projects has a lot in common with Dolorian , Skepticism and Morgion even at times earlier Amorphis in sound and textures. I really like the Proggish organs and keys going on with the gutteral and painful gothic vocals. The guitars/ bass are those epic slow deep doom guitars that just fill sorrow through ones soul. I feel a kinship with the greatest doom band ever Thergothon as well. Pantheist need to get a strong push for once as they are a fantastic unit which ebb and flow through many different Doom stages, Doom/Death, Funeral Doom, Avant Doom etc. Firebox has an amazing winning CD and should raise the chalice high in pride. 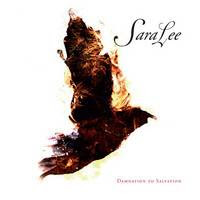 So were do we begin with a poppy goth metal band that reminds me of H.I.M , Paradise Lost or even Fall of the Leafe at time to me. There is a prog element to this band and there are some down right Doomy moments. As a whole they try to keep the style massive and huge in sound and feeling. Sounds like an army of guitars and strings are playing most time. The vocals as goth metal standard fair melodic sung/ spoken vocals there are a few moments of growls but never much. There is a very catchy nature to all that Sara Lee does but the name is just going to make most think of the pastry company I'm sorry to say. Sara Lee are really radio ready out of the box and if they could get some US/ Canadian airplay they could be the next Evanessance. Here is a project that use to annoy the hell out of me esp the main musician with his flamboyan ways and beliefs. I don't know what or where Nick is now as a person but he has made one hell of a Doom metal release this time out. If your a fan of The very Atmospheric side of the genre then you will be floored as its not 100% doom there are Folk, Jazz and Rock elements layered through out Six waves of woe. The closest musically to Forest of Shadows to my ears would be Katatonia and Anathema with a good touch of later Amorphis and Cannan going on here. There is an electronic feeling like the last Brilliant Katatonia has on it as well. Forest of Shadows will break the Katatonia clone stigma very quickly if it continues on this path. There is so much more to this project then sorry this time out.

Does Saint Vitus mean anything to ya if it doesn't then just walk away now. As this is the band that mastered the Sabbath sound and made it all there own for 20 yrs. Well Scott Wino is the guitarist and vocalist (at times) that help created the Classic Doom/ Stoner sound that bands all over the world love there would not be labels like Rise Above, Meteor City etc without Mr Wino and Scott is no different I think he is even adding the Fuzzed out 70's guitar sound more to his 1st real solo CD. Punctuated Equilibrium is Heavy, Funky, Raw and just down right Bluesy to say the least. The solo's are thouse that Bands like Trouble, Sabbath, Cathedral would all be blown away by. It's nice to see a label show some respect to the legends of a genre and ideal of music. You keep kicking the worlds ass with your guitars sludgy sound Mr Wino...

Folk I know there is close to 10 yrs of bullshit about this band both Josh and Angela seem to like to confuse and cause mass hatred for them and there craft. This release was orignally on Full Moon productions in 2004 but Southern Lord see's what I do with this release . It's a hypnotic Black Ambient journey into one's own madness. If you a fan of Burzum, Ulver, Xasthur then this is a must listen. Genevieve 's melodic Static and noise is almost a symphonic manner. The drums are primitive the riffs are monotone and the vocals are grim and buried in the mix. Then there are post rock moments that match the bands like Devil Doll or Slint int here complexity and brillance. Its just perfection to my ears. There is a magic about this and we all know that the new release is coming soon on Full Moon but we have no Idea what to expect. Other Velvet Cacoon releases just have not lived up to this . So all we can do is wait and see. Though for now we have Genevieve a masterpiece in Black Ambient Metal that will keep the world talking for another 10 yrs I'm sure.

Maegashira is a difficult pill to swallow for me as there are moments where they sound like Earth, Eyehategod and the Melvins and just kick major ass. Then come they jammy stoner groove moments that just make me want to tear my fucking eyes out. Don't become Clutch or Orange fucking Goblin to me. This band needs to follow its own path I understand but 50% of the time of me hating whats going on is just to much for me to say much more then. I'll see where they go in the future right now this is a pass.