Skip to main content
Posted by The DoorwayTo December 09, 2019 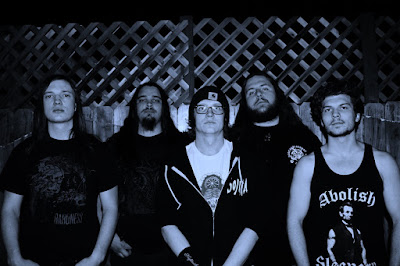 1. Tell us a bit about Pinewalker . Migration is you debut correct? I hear mix of Sludge, Doom, Thrash and Grind in your music  what brought this sound?

I think what gives us our sound is our love for heavy and loud music. We’ve all played in more bands than we can count, but being able to come together and make music this loud and frequency heavy, that's what really gets us excited. We want the sound waves to physically hit people, the way we’ve seen a lot of other bands do to us.

We did a DIY release for many reasons. The biggest one being that for us, it was just easier that way. We appreciate being able to set our own goals and working as a team to achieve what we only dreamt to be possible. As far as promotion, we are lucky to live in an age where we are the masters of our own destiny, so to speak, as far as getting the word about us out. When you look at most bands out working right now, most are doing all of those things themselves anyway, so we decided to follow in their footsteps and do the same. Social media and digital outlets are very important, but most important is being true to yourself in your music, and do what you can to get people to notice it.

3. In 5 words how would you describe Pinewalker to people?

Loud, heavy music for everyone.

Really, there are far too many for us to really list. We are all huge fans of music in nearly every form. For me, I would say the strongest ones would be bands like Neurosis, Baroness, and Mastodon. However, we are hugely influenced by bands in our local scene as well, such as Cult Leader, INVDRS, DONE, SubRosa, SWARMER, The Ditch And The Delta, as well as bands from the scene just over from us with bands like Khemmis. We are massive music fans, and we love so many different things, that they all creep into how we write and play.

5. What is the SLC scene like? Is there a good extreme metal , hardcore and noise rock scene or are you the new breed of building that scene up?

To us, we hold our local scene very near and dear to our hearts. When you really look into the history of the heavy music scene here in Salt Lake, it has kind of built up its own sort of mythos. Some of the classic bands from our valley are Iceburn, Eagle Twin, SubRosa, GAZA, Birdeater, and many more like I’ve mentioned before. We are lucky enough to be active in this super heavy scene alongside other great bands we have the fortune to call friends such as Tomb of Belial, Necrowolf, The Ditch And The Delta, DiseNgaged, and many more. I think the formal religious culture that is as thick as the smog we get here leads a lot of people who aren't really a part of it to create music and art that stands firmly outside of it, and it has caused its own kind of sound here. We are really fortunate to be counted amongst these other amazing bands.

6. If you could make a video for any song on Migration . Which one , why and how would you want it to look?

Honestly, if we had the time and budget, I would love to make a movie for the whole album. When it comes to writing lyrics and arranging the track list, we approach it in an almost movie type of way. We often discuss parts as if we were directors looking at an epic scene, or a close up shot of a particular emotion that we want to try and convey. Outside of that, however, I would really want to make videos for Maelstrom and Bone Collector first.

6. Is there a running theme on Migration of just a collection of Bluesy , Dirty Thrashy Sludge fest?

There is a running theme actually. When we first began writing this album, all of us started going through some really difficult things, like losing loved ones to cancer, health scares, and all manner of not fun things to deal with. A lot of those things caused us to have to adapt and change who we are and how we carry ourselves. All that started bleeding into the music we were creating, so we just decided to let it flow out and see what we came out the other side with. The album turned into a narrative story of moving through trial and hardship, being forged in that fire, and collecting yourself on the other side to be better than you were before.

7. How Does live vs studio differ for a band like Pinewalker?

We try to be as similar as we can in both environments. The main difference being all of our live equipment being at maximum volume on stage. Our goal live is to create a cathartic experience where we can get together with other people, shed the weight of normal everyday life, and just experience emotion at the forefront of our being. We want to have fun and entertain, but we aim to create an atmosphere of acceptance and togetherness through heavy music that is hard to find really anywhere else. These desires we have come from bands we’ve seen live that gave us the same experience, and if we can do the same thing for other people, then we have achieved our goal.

8. What bands are impressing the members of Pinewalker?

Loads of bands are impressing us lately. All though, I would probably word it as us really enjoying a lot of the latest releases along with classics that we just always listen to. I can’t speak to what everyone is enjoying lately, but I can tell you that I’ve loved the latest releases from Gatecreeper, Baroness, Cattle Decapitation, Power Trip, Conan, and Nile. Outside of heavy music though, I’ve really loved the latest Post Malone, Billie Eilish, the Hamilton soundtrack, Jacob Collier, Lizzo, Rezz, and things like that. I really love listening to just about anything.

9. Visuals how do they change the over all presentation to an underground band?

I think visuals are just as important as the music itself. Art and visuals really set the atmosphere for the art that you’ve created to go with it. For us, we wanted to show that even though we have a very heavy sound, we appreciate the beauty of softness and expression. We didn’t want an overtly, “metal,” aethstetic, we just wanted our art to match us, and I think Charles Bogus, who did the artwork for the album really knocked it out of the park for us.

10. If you would tour with anyone who would it be and why?

Man, I would love to tour with some of my favorite bands like Mastodon, Baroness, Neurosis, Opeth, or Sumac for sure. I would also love to tour with some bands that don't really share the same sound as us, because I love multi-genre shows. I think touring with people who have the same mind set but different way of approaching sound would be amazing.

11. Do members of Pinewalker play in other project my readers can be exposed too?

Yes! Our lead guitar player Sam Roe is in the killer power metal band Ancient Counsel, and our drummer Nate Perkins is in a fantastic melo-death band called Winter Light. Both are really phenomenal bands that everyone should check out.

12. The artwork is very interesting to say they least . Who did it and how does it tell story to the songs on Migration?

Thank you for saying that! As I said, Chales Bogus did the art for us, and we couldn't be happier with how it turned out. I think it does exactly what we wanted it too. We wanted something that fit the themes of change and progress found throughout the album, and it does that, to me at least, perfectly.

13. How has the digital age for a younger band made creating and releasing albums different from the 90's or early 00's

To me, it has made the desire to create and share even easier. Sure, it has some problems like an over saturated market, but the ease of access to this kind of stuff has been really fantastic for bands like us who want to get out there and make music.

14. How did you write Migration was it all at one time, over time or just in studio and left that more live raw vibe in full effect?

We wrote it over a period of about a year if I recall correctly. We really took our time to fill everything out just the way we wanted before we hit the studio to make things as easy as we could for ourselves. We have a tendency to adjust certain phrases or instrument parts out of nowhere, so being able to have a clear picture of what we are going for while recording makes the whole thing a lot smoother for us.

15. Thank you for the time any closing thoughts here.

I just wanted to say thank you for taking the time to interview me, I’ve really enjoyed this. The last thing I would add is a thank you to everyone who has supported us throughout the years, and who continue to do so. It means the world to us that people enjoy this music as much as we do. We plan to hit the road very soon, so if you want to check us out live, keep a close eye on us, we’d love to party with you for a night on stage.