Skip to main content
Posted by The DoorwayTo June 19, 2017 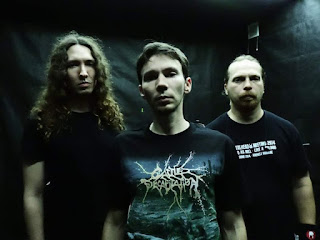 1. The us a bit about the project as this in a new Prog/Death/ Tech Metal force to my readers.

2. I know the band is sans vocals and I can hear why the flowing and complex arrangement would be lost with vocals I agree. Why did the band feel to no without vocals?

We understand, that if we had vocals maybe we will be more close to the listener and more popular. But both of us is diehard fans of instrumental music, like fusion, metal, and avant-garde, so we just decided to make what we love. We also think that it can be our niche because there are not so many instrumental bands in tech death world.

3. I hear many elements in the band artists like Watchtower, Atheist, Opeth, Devin Townsend and Gorguts just to name a few. What bands made Dark Matter Secret who they are?

We like all bands that you mention, basically all that you love to listen influence your musical mind. Most obvious influences on Perfect World Creation are Obscura, Beyond Creation, The Faceless. I think that is why we called it death metal even if you can’t hear growling vocals.

4. How does the Ep from a few yrs back differ from the full-length " Perfect world creation"?

Two tracks from EP was written after album. They just were not in a concept of the album so we decided to start from here. Those tracks were about alien life forms. They have more modern ideas, a little pinch of synths and way shorter than tracks from the valbum.

5. Your label The Artisan Era is not well known to myself how did you start working with them and what has the collab brought?

When we were in search of publisher vocalist from my other band (Irreversible Mechanism) Yaroslav told me about The Artisan Era. We know most of the bands from TAE, but didn’t know about their label. Then we send email with pair of tracks and get offer to join the family.
Guys from TAE did awesome work and helped our music to find listeners. That also brings us an opportunity to sell CDs and merch in U.S.

6. I love the Dissonant Jazzy element they remind me of bands like Virus and Ved Buen Ende as well as Ihsahn solo material. How are songs fleshed out and created to sound like this are they studio creation or works of madness in a hot rehearsal room ?

We are from different cities of Russia and work on distance most of the time. It’s long and hard process, but still enjoyable. It starts from simple ideas and then it became more and more complex when we add more guitar layers and building song structure. Then comes long process of polishing music, but in recording process there is still place for improvisation.

7. Youre from Russia what is the current metal or extreme music scene like there?

It’s a difficult question. We have a lot of talented bands, but not so many fans of extreme music. So there is a scene but there is not industry, there are not so many music festivals for local bands even in big cities like Moscow and Saint-Peterburg.

8. If you could make a proper video for any track off new release what track and what visuals would you want?

All themes in our album are very abstract, so if we make visuals it would be abstract too. Even in 21 century no one knows how the world was created. How you imagine born of gods or creation of life? Light from emptiness, cell division and etc.

9. How does your live performance differ from the album and what do you bring to the live arena?

We are studio project for now

10. Is there a story or theme behind the new album without words we have a very open landscape to paint.

The story of the album is the creation of the universe and how we imagine that. Each track is some stage of that process, like emergence of space and time or light from the first stars.

We try to listen not only death metal but other different styles of music from classical music and jazz to avantgarde and some kind of electronic music. We’d like to mention Exivious, Pryapisme, Planet X.

12. In four words tell us what the band sound is ?

13. You rely on Social media and Bandcamp for internet presence. Is that and good PR the best way in 2017 to get a band known?

If you are studio project and living in another country that is the only presence that we can make.

14. Where do you see the sound of the band heading ?

We want to expand our emotional palette on next album and use more elements from other styles of music but save the main direction.

15. Thank you for time any closing thoughts here

Thank you for that interview! Don’t fear to try something new and open new names for yourself.