Skip to main content
Posted by The DoorwayTo May 01, 2016

6 reviews for those hiding in the shadows .... 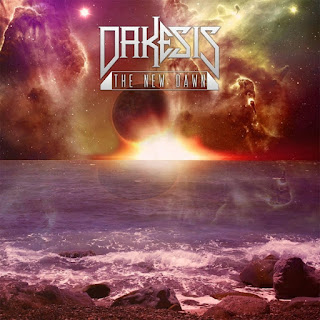 A band from a new label to my eyes . This is a female fronted Power/Prog metal band that sides on the symphonic with every breathe they take with some very similar traits to bands like Nightwish, Gathering  with strong elements of Ayreon, Rage and Rhaspody.  There are some very cool male/ female vocal interplay at times going on here. This is a very upbeat and major key sounding band. The production is very full and epic so say the least. This sounds a lot of those mid to late 90's bands that were on Massacre, Napalm and even  Century Media . The have that romantic almost Gothic overtone to the music as well. The synths are a major major focus here. Be ready of over the top female soaring vocals with those similar guitars. I see this band has been around since 2008 Odd this is 1st time I've ever really heard of them.  As the band is from the UK and I have been listening to many bands of this style from the UK for over 25 yrs. I would not pass this album up if you like the material and bands I'm speaking about . This is a very well done album and a great step for Power Prog Metal !!!

Symphonic Black Death on the most powerful and epic of scales they remind me of the Best parts of Dimmu Borgir, Old Mans Child and Cradle of Filth..  Lets also mention members of Rotting Christ, Mayhem and Shinning are on the album helping as well.  Darkend have a very Septic Flesh/ Samael feeling in the way theatric's, electronic /industrial elements are mix in with the Blackened Metal and Occult themes. This is really something that is a cut above the rest in presentation and creativity.  The guitar work is some of the most impressive I've heard on a full on Blackened release in a while. The vocals are much more ritualistic and clear then normal as well and give a very venomous over tone to the album as whole. I know many with disagree with me but the Gothic side of the band makes it all the more special. This band could have been on Cacophonous or Candlelight just as well as they have that element about them in taking many elements and making it all their own. Shunning release to say anything less would just be false.

Out of the Gulf of Texas what do you think you will get with members of  Imprecation and Bahimiron. Well its even more sinister and slow crawling out of the depths ... Yes this is USBM but it has a Post Metal and very much a Doomish element to it all to make that sickness come spewing forth in a way bands like Skaphe, Nightbringer and Inquisition . There is a distant violence about this album something you know will get to you but half the horror is waiting for it to get there. The tracks are more midtempo and from time to time go to that blistering fury. People will say stupid shit I'm sure but this is a very mature Black metal release there was time and care but into the making of this and it shows.  Morbus 666 is really a mix of old Northern European Black metal mixed with Greek elements, USBM and Post Black metal to make it all it's own at time but still feeling like the roots are there..

Electro Goth Metal from the Teet of Tiamat, Sister of Mercy and  Lacrimosa .. This is not for me at all the male vocals are so watered down . The Guitars sound like the most boring parts of a Sentenced album. The only moments that are any passion are the female vocals. Ok this one is done pass.

Wow another band in the same vein as Crisis this female fronted hate filed Post Metal / Death Rock album or should I say 4 song ep is one that brings in nightmares of the most wonderful manner. There is a strong Babes in Toyland and well as Made out of Babies Nasty Punk side to this.  The female vocals seduce and snarl in the same breathe and work so well with the music that has that Forgotten Tomb, Bethlehem  element pumping through out as well. Volker is going to be a band to be on the look out for as it looks like like a major part of Otargos made this band.  As we go through the tracks there is even a bluesy and soulful element to this band. The more interesting Volker become by the moment. Don't miss out as this could be one of those bands you could say I was into before any of you. Most Impressive.

Geryon- The Wound and the Bow- CD/Digital ( Profound Lore)

So two members of Krallice creating an album with just bass, drums and vocals and this is one of the most haunting and bleak Progressive Dark Post metal albums I have heard. The Complexity with just two men creating multi layered tones both low and mid end in sounds. The sparse and deep drumming arrangements. there is a very noise/ electro element to this as well. At times I think these two guys really wanted to see what it would sound like if Unwound and Lighting Bolt incorporated Post Black metal and Doom metal into there already ground breaking music. Geryon really is giving me chills of how forward thinking this duo is and what a intricate sound and texture of patterns can be made with just a bass, drums and vocals that are as tormented as blessed in the same release.  Bands like Geryon just show me even though there are limited number of ways to the chords and notes in the world and they have been played for thousands of years. There is always something new and inventive that will come out. Music is eternal. Sounds can always be manipulated and cultivated into some new tone and wave. Geryon thank you for helping me love indie music on an extreme format still  43 yrs being on this earth..