Skip to main content
Posted by The DoorwayTo October 09, 2015 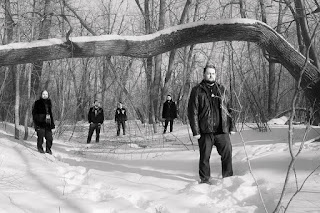 1. As Wilt is very new to many of my readers tell us a bit about the band...

Wilt was formed in 2010.  Initial concept was to create a studio only black metal band.  Shortly after our release of our album the traffic and reception wasn’t something we could ignore.  We decided to reveal vinyl plans for the album and decided to piece together a live band.  now, 5-ish years later here we are, touring extensively and on the cusp of our debut release on Bindrune Recordings

2. I read a bit you were just on tour still supporting your 1st and only ep how was that ? What did you learn from this tour?

Yeah, we just finished a 2 week eastern Canada tour, Wilt has never been out east prior to this tour.  It was incredible.  The amount of support was insane for us.  Firstly we finally sold out of our record.  We only pressed 300 and now thanks to this tour.  We are now sold out.  We learned that the east LOVES Wilt.  We will surely be back sooner than later

3. Your mew album " Moving Monoliths" is coming on Bindrune label how did you come to work with this amazing Heathen Metal label?

Actually got referred to Bindrune from Austin of Panopticon.  Austin has been a tremendous supporter of Wilt over the years.  We got to chatting and I emailed Marty after our discussion.  Marty was as ecstatic to be working with us as we were him.  Couldn’t be in a happier home with Wilt.

4. There is a strong mix of Doom/Black metal and a strong Atmospheric element. I can hear bands like Wolves in the throne room, Dolorian, Bethlethem and Agalloch. What band did indeed influence this sound for Wilt?

5. You were a Duo for recording but now are a 5 piece was this just for touring or will you be a full unit from this point forward?

From this point forward Wilt will be a 5 piece.

6. What is the underground metal scene like in Winnipeg? Are there venues to play and bands there you would like to let the world know about?

Winnipeg is pretty random at times.  The fans are really supportive and at times it can seem like they are in short supply but other times they come flocking.  We don’t play Winnipeg too often because we find its way too random attendance and over saturation is a major problem with local bands from here.  We are actually losing one of our more iconic venues this November.  So that is disappointing.  But Other than that.  The venues certainly aren’t in short supply.  This may change but as it stands theres 4 good metal venues i can think of off the top of my head.

7. Are you fans of the digital age ( Facebook, Webzines, Bandcamp,Youtube, Digital releases) or do you miss the more old school Radio, Print zine and CD's?

I will say the reach Digitally is far greater than physical releases now a days.  With exception of the vinyl resurgence.  I do miss the excitement to obtain a physical release.  Now everything is digital.  A CD you can hold.  Digital formats you cant.  So I will miss that.

8. What are the members of Wilt currently listening to and reading?

9. What is the theme or story behind " Moving Monoliths"

The overall theme of Moving Monoliths is a fairly serious matter, over the years we have lost so many friends and family members due to depression.  Moving Monoliths tackles those issues head on.  We hope that the soundscape we have created will empower people to look on the bright side of life.   It is so easy to take the darkened path and we hope to distract people from this miserable world.  Just for an hour.

10. Do the members play in other projects outside of Wilt?

Yeah, Myself, Jordan front a death metal band called Exuvium.  Blair the drummer also drums for Exuvium.  Mike plays in a fantastic Sludge/Noise band called Fawnchopper.  They are a weird hybrid of Isis, Nine inch nails and Cult of Luna.

11. As I have not heard your Debut Self titled EP how does it differ from the new album on Bindrune?

Our new album feels more mature and what really differs from the EP to the full length is the 5 piece band on the record.  Really brings a new dynamic and sound to the album.  Lyrically it is similar, but musically its very fresh, mature and almost more atmospheric if we can get away with saying that.

12. If you could make a proper video for any track on " Moving Monoliths" which would it be and why?

I think I would like to make a video for the Title track.  It just conjures up so much imagery and it would be amazing to see video alongside that song we have been laboring over for the passed 2 years.

13. If you could sign to a major label would you, or is underground metal always a bad Idea for this move?

I almost would rather support the smaller labels than a larger label.  Heard a lot of nightmare stories.  Not to say I wouldn’t say yes to a larger label but I would go over the deal with a extremely fine toothed comb.

14. Thank for the time. Any closing thoughts here

Thank you for the interview and the kind words on our new album.  We hope to bring in new fans and our current fans will enjoy our new album as much as we do.