Skip to main content
Posted by The DoorwayTo June 06, 2020

Blood, Creeds and Honor that is all anyone really has anymore .. 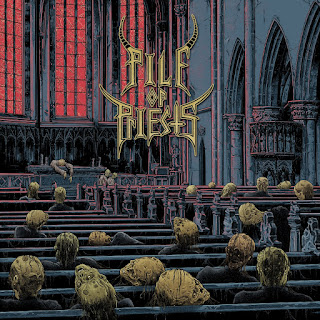 Pile of Priests- S/T- Digital/CD ( Extreme Metal Music )
Straight out of Denver CO. Comes this  Dark Progressive Death Metal band reminds me of a cross between Bands like Nevermore and Iced Earth  meets Gojira and Beyond Creation. There are some very strong thrashing elements going on through out the Guitar and Drum work good. I feel that heavier late 90's / Early '00 Gothenburg and Germany Death metal sound too. There is almost Medieval  element to the over all sound that is going with Pile of Priests. The name is really out of place for a band with this sound . You really are expecting something so much heavier and brutal in nature. Pile of Priest really have a very strong tech and melodic over tone that comes from these songs. I want to say there is a Doomy style coming of the tracks too but more in just the tone and production. Pile of Priests is far more impressive then I expected when coming into this album. Looking forward to going back to the debut and see where all this came from.
https://pileofpriests1.bandcamp.com/album/pile-of-priests-2 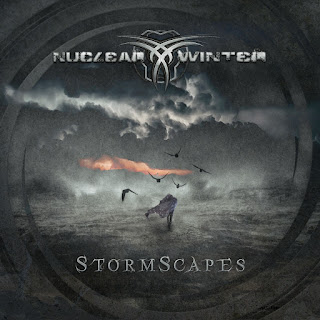 Nuclear Winter- StormScapes- Digital ( Self Released)
So it looks like this one man assualt or Industrial, Electro Death metal is no longer unsigned the have now partnered with MMD Records out of  South Africa. When I listen to Nuclear Winters all I hear are mixes of  MoonSpell, Samael and Septic Flesh pouring from the speakers. There is a sinister and dark electronic over tone to the Death metal that is coming from the Speakers. I love the mix of  Brutal and Futurist. It's something that works extremely well for  Nuclear Winter. There is at time a very Fear Factory vibe that is hitting me as well . I love how heavy this project can become but still keep that Catchy melodic moment. Nuclear Winter are extremely Technical as well but never lets that become the whole picture of the album. This is another band I swear had to hear  Arcturus, Oxiplegatz and Code as there are some very similar elements of those project coming through the speakers with no disregard. We have really put this into the place many will either love or ignore  Nuclear Winter as this is going to be something you need to like electronics and industrial soundscapes.  Doing a cover of  " New York, New York" is an interesting choice and not fully sure it works but im going to say nice of you for just going for it.
https://nuclearwinterzim.bandcamp.com/ 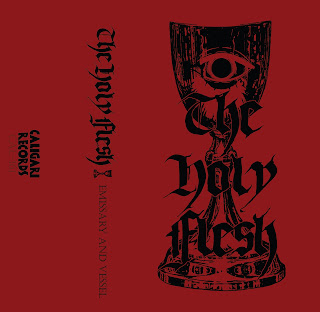 THE HOLY FLESH- Emissary & Vessel- Digital, Tape ( Caligari Records )
Calling  The Holy Flesh a Demo seems a bit out of place as its really fleshed out no pun intended. This is atmospheric Black metal with some really melodic and hypnotic elements . 8 songs well crafted and very well produced. I wondering why a Tape only output this would be much more well served to be a Vinyl and digital undertaking . I can understand not making CD's as they seem to be the way of the Dinosaur now. This  U.K. Force really know what that are trying to achieve and have doing that without fail. I see the Tape is only 150 copies so maybe it's more just a treat to those that like the format and like to have that physical copy. I almost at times feel a fuzzy out  Prog rock over tone going on here through out  Emissary and Vessel. I'm looking forward to the next encounter to  The Holy Flesh as well. I feel very special things coming from this project.
https://caligarirecords.bandcamp.com/album/emissary-vessel 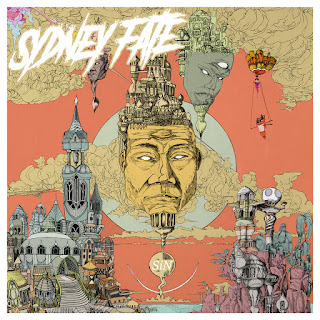 Sydney Fate- Silicon Nitride- Digital/CD ( Eclipse Records)
This Six piece from Wales in the UK is what I want to call  Progressive Emo Deathcore. It is the oddest and most fucked up mix of  Pop Punk, Emo, Swedish MeloDeath, Deathcore and Post Hardcore I was ready to hear. I was not ready for this and the mix of Beauty, Sadness and Aggression here is not something you hear mixed as most band fail big time . They Remind me of  Ice Nine Kills , Beartooth, Memphis May Fire and Parkway Drive for sure. So you know where I'm coming from. I wish there was more a mix of Clean and Growled/Screamed at same time . The Clean vocals are very melodic to say the least. There are some great vocal acrobatics on the harsher vocals that really do impress. I know you are going to say so this is Screamo Metalcore stuff and its not its so much more then that. the mix to many elements to be that limited. I even like that 50's and 60's Surf/Harmony to the music and vocals at times.  The very much a love to bands like Panic at the Disco and My Chemical Romance through out this record as well. This is one of those I call Thinking Man's releases. You will never get the full picture after even 2-3 listens. This is a slow burner that is going to make find something new each and every listen. No better time then now to start that journey.
https://www.eclipserecords.com/release/silicon-nitride-sydney-fate/ 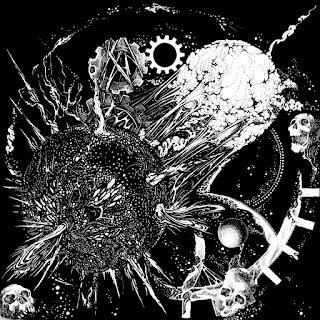 Membaris- Misanthrosophie- Digital/Vinyl/CD ( W.T.C.Productions )
German Black metal is something that really never got the respect I thought it would will some very impressive bands ( Moonblod and Secrets of the Moon) Come to mind right away. Membaris create Dark and Mysterious Atmospheric Black Death with a very bombastic and foreboding overtone. There is something bleak and forgotten in the days of yor about  Membaris. They are very similar to bands like  Marduk and Gorgoroth not in sound but in vision they have a style set and they are going to prove to you that are strong at it and you need to hear it. The artwork is the Black and white experimental ( you need to figure it out ) style and works so very well with the sounds that are being presented here. Looks like it's been 8 yrs since the last time these madmen gave us a creation and I can tell you . It's worth the wait. You don't always get the caliber of a band like this  from Black metal but when you do it's clearly time to listen.
https://wtcproductions.bandcamp.com/album/misanthrosophie 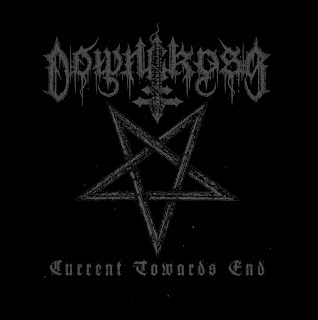 Downcross - Current Towards End- Digital/ CD ( Cavum Atrum Rex)
Ah a band from the east this time Belarus. Downcross mix three elements very well on this EP. Melancholic  Black metal, Punky Thrash and a Doomy atmosphere over it all. Downcross can be a nightmare as well dreamy all at the same time and that is not an easy thing to create those aural planes are not easy to intertwine in any way shape or form. The vocals almost come form that Blackened Battle metal style. Downcross throws in this almost folk thing in throughout several of the tracks too. So now it has that Heathen Black thing going on as well. Current Towards End is more of an interesting creation the more I listen and dig into it. I wanted to say it was just another good Black metal record but there are some very impressive things going on through out the album this will be another record that I will put on a few times more for sure just to see where it takes me.
https://downcross.bandcamp.com/