Skip to main content
Posted by The DoorwayTo November 07, 2019

Sentient Ruin/ Rope or Guillotine Artist- Nightfucker Interview is up 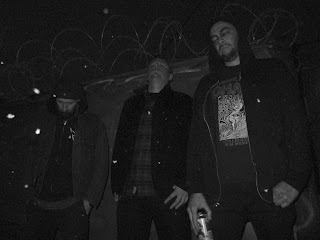 1. Nightfucker is a mix of some crusty, sludgy, hardcore meets Doom nightmares. How did the band come to be a members are from Europe and Canada correct?

N- I just consider us to be a dismal filthy doom band. No focus on blues riffs, stoner bullshit, or having a good time. We came to be by all being in the right place at the right time with a mutual disdain for most things but a love for slow ugly noise.

A - Dom had moved to Vancouver in 2008 or so, and had gotten in contact with Nick somehow or other. Nick and I had been in Radioactive Vomit for a couple years at that point, and we were both into Moss. One night Dom came down to the Radioactive Vomit rehearsal space, and he showed us a few riffs in between killing a bunch of beers and smoking out. Another friend of ours came along too and was going to do vocals, but he got wasted and trapped in a locked stairwell in the rehearsal compound. He had to piss in there, trapped, with the security alarm screaming, for I don’t know how long. I think he lost his mind in there. That was pretty much it. From the beginning our dim focus was on hopeless, miserable doom. I don’t think there was ever any other option.

2. Nightfucker why the name and are you concerned it will limit the expansion the band to some?

N- Nightfucker’s operated under that moniker for the best part of a decade with no real knowledge of it’s existence beyond the three members. At this point the least we care about is what people think of our name.

A - I don’t think the name’s going to make anyone hate us more than they already do. The name is pretty apt - this is a fucked band. Nothing makes sense, so why should the band name? No one’s going to confuse us for a tech death or forest metal band. We don’t pretend to have any intellectual insights to offer here - just suffering and madness.

3. How did you come to work with a very adventurous label like Sentient Ruin? Youre also on a label called Rope or Guillotine in Europe correct?

N- We contacted M/SR, it turned out he really liked Doms old band Moss and shared the same opinion of the dismal state of doom.  M runs a killer fucking label and is on top of his shit. Sentient Ruin wanted to co-release with an EU label, having met Jaka from Leechfeast he’s fucking great so his label with Eric, Rope or Guillotine seemed a perfect choice. Luckily they thought so too.

4. In 5 words how would you describe Nightfucker to someone listening for the very 1st time?

A - A real fucking bad idea.

5. if you could make a proper video off any of the 4 tracks of new Self titled Album which would it be and why?

N- There’d be nothing "proper" about a Nightfucker video but I’d appreciate seeing a visual representation of either of the first two tracks.

A - Maybe it’d be a video of Dom changing his guitar strings for the first time in literally ten fucking years. I’m surprised he remembered how.

6. What bands are currently impressing the members of Nightfucker?

A - I’m not terribly up to date on new releases, but our last show was with Fetid and they were great. Resent from Victoria is also worth checking out. Beyond that it’s been Teitanblood, Vomitor, Abysmal Lord, and always Archgoat and Truppensturm.

7. Is there a theme to the new album and how does the artwork play into that story?

A - The songs focus on mental distress, self-hate, despair, addiction and suicide. There isn’t necessarily an overarching theme. It’s all fairly incoherent; nightmare existence viewed through a broken lens of depression and confusion. In this case, the pit is examined from within, not above.  The LP art concept reflects this, and Matt Sidney was the only maniac we considered to take the morbid vision and bring it to rotten life.

8. Will Nightfucker be performing live off new release ?

N- We will, we’ve never been an overly active group in any respect but 2020 will hold some live activities to be announced shortly.
A - There are some live attacks in the works. Dom’s schedule is completely up in the air, though. So who knows what tomorrow will bring? And who cares?

9. I hear elements of Noothgrush, Integrity, Grief,Melvins, Damad and Corrupted. What caused this next muscial adventure?

N - I don’t connect Nightfucker to the more hardcore elements of Integrity/Damad, the negativity sure... but early Grief, Corrupted and Noothgrush definitely were the sonic equivalent of crushing misery and despair.

A - Grief, Corrupted, Noothgrush are probably the most direct influences for sure. A long time ago, when I was just getting into playing guitar in bands, I was at a friend’s house and he played me a dubbed cassette of  ‘Gluey Porch Treatments’, and it blew my fucking mind. The feedback, the drum sound, the bass - that’s an absolute classic release. I can remember getting super high and ruining my car speakers blasting Lysol. I feel like that’s pretty common - I remember a bunch of us ate mushrooms at our old jam space. One of our friends stumbled off and we found him standing right in front of a PA stack just blasting Houdini at deafening volume. Inspiring!

10. Tapes and Vinyl seem the medium of choice in 2019 why do you think these media have had such a strong rebirth in the extreme underground?

A - I have no idea how other people relate to music and albums and whatnot. I’ve always approached music in terms of physical albums, considering the artwork, song sequence, production, etc.

11. How has digital age and social media change how an underground band like Nightfucker presents its music and art to the world now vs a decade ago?

N - The only difference between now and a decade ago is that we have something to "present" yet we’re still not utilizing any of the digital/social media facets to do so.

A - I guess now that we actually have a recording, people can access it through digital and social media. We still don’t have a bandcamp or any of that shit. I don’t even think we have an email address.

12. Do Visual matter to a band like  Nightfucker? or is it really just about the sonic distruption that is being created?

N- Visuals matter. We all come from a pre-internet age, taking a gamble on an album hoping it’s contents were as equally fucked as the cover art. Working from the opposite direction MS created a perfectly deranged presentation for our filth.
A - I’ve always thought artwork influences how music is interpreted. I still think of certain albums having a dark sound, or sounding red or cloudy or whatever, because of the album art.

A - Not much has changed. Nightfucker has gone through long periods of inactivity throughout its existence. If anything the project feels more tortured, more desperate, every time the coffin lid is pried open. I quit the band at one point years ago, but we went out and got trashed and things basically continued as usual.  Also, Dom’s partied with Pinhead from Hellraiser a couple times over the years - not sure how that might have impacted things.

14. Do the members of Nightfucker still have other projects or is this the prime focus now?

N- Nightfucker is I suppose related to the "Scum Division" a loose family of bands where we all share various members containing the likes of : Grave Infestation, Encoffinate, Deathwinds, Radioactive Vomit, Ceremonial Bloodbath, Ahna, Temple of Abandonment and Chapel. I think for the sake of our sanity we all have to be making noise.

A- I play in Radioactive Vomit, Deathwinds, and Ceremonial Bloodbath.

15. If you could offer advice to a new underground musical nightmare starting what would it be ?

A – Thanks for thinking of us.