Skip to main content
Posted by The DoorwayTo August 30, 2018 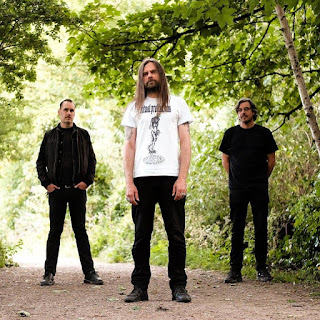 1. So those interested in this Project how did Ancient Lights come to be being the 3 of you are from all over the globe?

Adam: Well, it's a long story so make sure you are sitting comfortably.. Only joking - here is the condensed version - Me and Ben came up with the idea 13 years ago whilst on tour. Then Cris from Ritual conjured ‘the clock of inevitability’ in the shape of Tim whom I had also met whilst on tour years ago. Needless to say we are all very happy with the inaugural line up and its results.

Ben: Cris from Ritual had the idea that it would be great to put together a project with members / friends of three different bands that she really liked. We made it happen on some mutual trips to London and the rest is history.

2. I hear element of Dark industrial, Ritualistic experimental sounds and Fuzzy Droning Doom elements all into one very expansive yet minimalist movement. Did you know this is what was to come or did it just come as the experiments in music began?

Adam: As you may imagine - we had no idea what Ancients Lights would sound like and have surprised ourselves with most of the songs we have recorded so far..bear in mind our debut LP is taken form 6 hours of jamming - cut down to 3 then to the tracks we have.. In all honesty we could have made 3 or 4  records - all in different genres from what we threw away!..

3. Why name the band Ancient Lights ? Does it hold a key to the band's sound?

Adam: Algernon Blackwoods’ short story of that title is reason enough to entitle anything supremely creative with more than a touch of wild nature about it and is a great thematic signifier of much of the mood and sentiment of some of the songs on our debut…

Ben: If you walk around London you will see this word written on all sorts of old buildings. What does it mean? I’m not sure that anything actually holds a key to a bands sound more than the sum of its parts, but maybe it lends to communication.

4.  Adam and Ben have have quite a storied past with 5ive and Ramesses . I don’t know much about  Tim but how do you record and will there be a tour or gigs being you are from US, Sweden and UK?

Adam: You should most certainly check out Switchblade and then you may get another piece of the puzzle locked in - they are an immense band and playing live with them was how I got to meet Tim - when Cris suggested his name as time alterer I spat my beer out (in delight)… We are planning live rituals now for next year..

5. Why Self title you're Debut ? Also how does the artwork play with the tone and sound of the band?

Adam: The name of the band is so good and so multi layered it was a natural choice - there would be too much to take in and a dilution of the meditative nature of the omnipresent name - it also encompasses an old English bylaw that states when Ancient Lights is painted above the first floor window of a property  - that property has exercised its rights for no other building or structure to obscure the light hitting and entering the property.. and speaking of obscured light - the cover art is genius - Tim sorted all layout and sourced the awesome cover and back shots by Swedish photographer - Linus Forsberg - I think he nailed the look and feel of the music with those images before we made the record!..maybe the artwork influenced the sound of the record in the end.. when you are this high on music it's very hard to know and can sometimes spoil the magick…

6. Ritual Productions is not a label I’m very familiar with how did you come to work with them and what are so seeking for the Ancient Lights with them?

Adam: Ritual have been going for over 8 years now and are one of the best labels in the world in my opinion. Ritual is my home. Ramesses, 11PARANOIAS, and now Ancient Lights are all on Ritual.. Although not out of the question I would feel weird releasing a new baby on another label. Ritual is the right place for Ancient Lights - we fit right in already and love how things are going…

7. Are 5ive and Ramesses done now are will be see more from them in the future? -

Ben: 5ive ended in 2008, and I am not sure if anything will ever come out again, but I am working on a few new projects, so there is always hope! As for Ramesses, I think they are in the same boat.

8. Social media and the digital age  You tube, Bandcamp, Twitter etc how does this change a bands views in 2018 are the days of full proper albums coming to an end or is there a rebirth of underground music with VInyl and Digital Albums?

Adam: I would like to say I couldn’t care less mate - as I always do what I'm going to do creatively with immense cosmic blinkers on - ones I rarely remove or adjust.. I will continue to release LPs until no one buys them any more and will have to make my own one-offs on a lathe..

9.What bands are impressing the members of Ancient Lights Currently?

Adam: What - actual living, current bands?.. tough one mate… that detail aside I got this lot on pretty heavy rotation: Dukes of The Stratosphere, The Heads, Urfaust, Loop, Bowie, 11PARANOIAS, Massive Attack, Bolt Thrower, Cream, The Carpenters, Darkthrone, Hawkwind.

10. Ancients Lights is this more of a side project or are you looking to grow and create more albums in the future?

Adam: We are a new born baby band - and how we are treated is how we will turn out - just like real life - if things go well we will be around longer than most bands…. We will hopefully grow into a big strong band who are kindly and gentle in the trip we take you on - but beware we can just as easily smash your face in with ferocious riffs and crippling spells… We are already looking to record LP 2…

11. If you could make a proper video for any track off album what song and why?

Adam: Unless it was for one of my bands - ie work, I would never have the time to waste on someone else visuals…

12. What Rituals do you think would best tie in with listening to Ancient Lights Album?

Adam: Our live shows will be rituals as will everything we do - and all our releases will be called Rites as that is what whey are - and the bird will take heed and bear chilling silence and toads will bend backwards in a sickening manner and flies will swarm around certain audio tones and bats will weep blood before they fall from the skies and walk upright on the land spewing a new liturgy for a doomed world….Cup of tea and a fat joint will be a good basic ritual to enjoy your first listen to Ancient Lights.

13.  Artwork, Visuals and Imaging plays into the idea of a band before you even listen. If someone saw your social media and picked up your album how would that say Ancient Lights sounds before they listen too the 1st note?

14. In 4 words how would band explain the sound of Ancient Lights?

15. Thank you for the time .Any closing thoughts place here.

Adam: Many thanks for the interest and support. Our debut album is available from www.ritualproductions.net. There you can find gold LPs with black splatter which are limited to 200 copies, and the limited edition hand numbered and silk screened CDs as well as standard black LP and CD. Digital download available at https://ritualproductions.bandcamp.com/album/ancient-lights .