Skip to main content
Posted by The DoorwayTo December 29, 2016 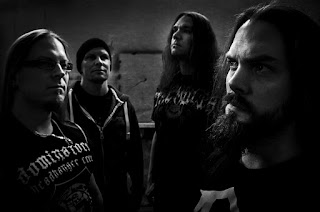 1. This is the 1st proper album I've heard from Dead End Finland . Tell us about the Symphonic Industrial Death metal sounds of the band.


It's never too late to jump on board with Dead End Finland, welcome. Our sound has formed and refined alot along the way making these three albums we've released. Even in the beginning the plan was to make melodic metal, but song by song we've increased the amount of depth and epicness to our songs. Now among the reviews of the new album they say we've created a style of our own and we are really proud about that.


2. I hear element of bands like Borknagar, Devin Townsend, The Kovenant, Arcturus. At , Pain and Septic Flesh . Who are the bands to inspire you?


We have a really wide taste in music and our influences are really different with each other. It would take ages to list them here, so lets say we go from the early 90's Sash! to Sepultura and a lot from between. If you must compare us to something a bit similar, maybe Soilwork, Pain, In Flames and The Kovenant might give you a hint of the line. Mikko (vocals) is a fan of Septic Flesh, so you might hear some of that there too. Funny that you mentioned Borknagar, 'cause their latest album has been in our record players a lot recently. Although we did not get any influences from them since our album was ready when Winterthrice was released.

3. Is it difficult to project the recorded material live on stage as it's so massive and so many electronic/industrial element intertwined withing the Melodic Black/Death Metal genre?


Sure, that would definitely be a challenge. It is one of the many reasons Dead End Finland has not started to do live shows - at least not yet. If the right moment comes, maybe, maybe not. We're not going to push ourselves out there without the demand from the audience. We've seen enough gigs with our previous projects...

4. There must be a story behind  " Slave to the greed" tell us all about it.


The lyrics on the album cover themes like hate, greed for power, antagonism, war and destruction and the way they reflect in our lives. About the unstable state of the world and how politicians and people in general are slaves to the greed and because of this corrupting and destroying everything. Some songs tell about these things more widely, some specifically about some actual events. For example "Nightfall" is about the tragic events on November 2015 in the Bataclan theatre, Paris. We wanted to honor the victims and their families and also to take a moment to think about the fact how these horrible things can affect anyone anywhere out of the blue.


5. If you could create and release a proper video for new album what song and what would you want it to look like?


Good question, we've been discussing about this a lot lately. Some decisions have been made and hopefully we can present you something soon...ish. We can't reveal the song here, but some things are worth waiting for.


6. How does Image and Social Media play a role in a band like Dead end Finland in 2016?


The role of the social media accentuates in the core of the whole music business, 'cause through it, all the bands are on the same starting line. Activity and interesting content are the key there and that's why we aim to have top-notch stuff to release for fans. If it's photos, videos or music, we try to make them as cool as possible.

7. If you could Collaborate with any band and work on music how would it be and why?


We are constantly working with several musicians by sharing opinions and receiving feedback in progress. And On the new album we have a song called "The Devil Inside Me" featuring a speak by Jukka Pihlajaniemi (Paara, Church Of The Dead, ex-Ghoul Patrol, ex-De Lirium's Order, ex-The Undivine). It's always great to have fresh ideas and new perspectives to support your own visions.


8. In 5 words describe the band to someone that has never hear it.

9. How did you come to work with Inverse and what makes the partnership keep working?


Inverse approached us and offered their help. It was perfect for us because we needed a partner in distribution and marketing of the album. The cooperation has gone smoothly so far and we are very satisfied with Inverse.

10. Is the creative process something that you work for while then enter studio or is it better to create in real time and just have a basic layout and let it organically happen in studio ?


Our way of working is quite unique, but it is the only method that works for us. We always record two songs at a time in the studio. That is because we want to focus with 110% on each song we are working on. With only two songs in each studio session it is possible to keep the intensity and make each track sound epic. This is why it takes about 2 years for us to make the whole album.

11. Would you ever be interested in a Major label deal or does this kind of music just get lost in those surroundings?


As said, we are happy working with Inverse so far. But if our shit gets big, there might be a situation where bigger label would suit better in our needs. We keep our eyes open for different options and opportunities.

12. What bands are impressing the members of Dead End Finland currently?


Oh, as previously mentioned there are so many. But just to mention few albums that we recently admired:
Dark Tranquillity / Atoma,  Inflames / Battles, Borknagar / Winterthrice, Red Eleven / Collect Your Scars, Decapitated / Blood Mantra, Testament / Brotherhood of the Snake.

13. Do the you all have other projects you create music in tell us about them if so.


We have also other projects but DEF is our first priority at the time. Currently Santtu plays also in Dying Daylight and Mikko in El Grende, a Misfits cover band. Jarno is a pro studio manager, so he is dealing with several projects every day.

14. At the end of all this what would you like your fans to come away from listening to Dead End Finland?


We hope that you take that 43 minutes time to really listen to the album. There are so many layers and cool stuff in the songs that it would be a rewarding listening experience.

15. Thanks for the time any closing thoughts here


Thank you. If you want to stay tuned whats going on with DEF, check out our Facebook site.