Skip to main content
Posted by The DoorwayTo December 01, 2016

Interview is up with Avant Prog Death Metallers Arriver 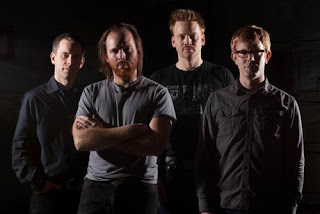 1.So tell us a bit about Arriver  . I have only heard How does it differ from early music this is a very Prog / Avant Death Metal album.

Emeritus is our 3rd full-length LP. I have always considered us a Metal band, but the sound has evolved from one more informed by 90s noise/hard indie rock to what you hear now, which embraces our love of Circle, Gorguts, and Classic Yes…ZZ Top… Diversity of sound, between albums as well as between songs, has always been a calling card of ARRIVER. Imposing an over-arching narrative to the album is conducive to this.

2. I hear element of Opeth, Meshuggah, October Tides, Gorguts, Dan Swano and Alchemist to name a few. Is it hard to mix Melody, Complexity and Brutality to sound like it all belongs?

The trickiest of those to incorporate is melody, which is why so many bands don’t try. None of us can sing like Rob Halford or Chris Cornell or Geddy Lee, so thats out. Successfully incorporating melody lies in structure and guitars—they need to provide a suitable context so nothing sounds tacked on or out of place. We are big fans of classic Prog Rock bands, especially Yes, I consider them to be unparalleled in weaving melody and hooks into very complex music without losing the thread. Of course with them melody is coming from all of the instruments—not just Jon Anderson’s voice.

3. What is a live show like for  Arriver? how does it differ from an LP being recorded ?

We drill the crap out of material to make sure we play it as tight as possible and generally keep the arrangements similar to the record. Faithfully executing the songs on stage—with passion and energy, including the audience in our experience—thats enough. We focus on tight transitions between the songs to keep the awkward stage banter to a minimum. When we do it right people are juiced.

4. You seem to be working with a label called Scioto now how did that come to be. I see you worked with Bloodlust! as well a label more know for noise and avant music  why did that partnership end as they seem to be in same city as you Chicago.

Scioto is small label run by a friend out of Columbus Ohio. He helped with pressing the vinyl and offered to release it on his label, but for all intents and purposes this is a DIY operation. Bloodlust! is run by our friend Mark Solotroff. We’ve collaborated with him and shared the stage with several of his groups, including the awesome Anatomy of Habit. ARRIVER is no stranger to noise and avant-rock, we are proud to be associated with unorthodox, challenging music.

5. In 2016 is Social Media and good PR all you need to get a made exposed to the world or do record label really still help the movement?

We’ve never had the support of a label that did anything other than help with pressing and distribution. Social media is fine but it can feel like shouting in the wind. Its good to know that people can find and buy our music—but they need to know we exist. For Emeritus we hired a PR company (DEWAR) which has been helpful getting the word out.

6. In 4 words how would you describe Arriver to someone that has never heard them?

7. I just wondering is Bandcamp a great resource for Extreme music artists or do you sell more from places like Itunes and Amazon?

Bandcamp and Soundcloud are fine for the time being. One benefit is there’s no barrier to getting your stuff up there and its used by most underground bands, of whatever genre, so people don’t look at you like you’re a moron if you tell them to “buy it from bandcamp”. Traditional record distro is seemingly getting harder to arrange as the way people acquire music continues to evolve.

8. If you could make a video a proper video with budget for any track off Emeritus which would it be and how would you want it to look?

We shot a video for Liquidators at a small club last winter and edited it ourselves. Its very DIY but I think it represents us well. We are looking into getting a video for URSa produced next, this will be with a friend of ours who knows what he’s doing.

9. Is there a story or theme behind Emeritus?

Through magical realism Emeritus retells the story of the Chernobyl meltdown and its rebirth as the Zone of Exclusion. “…A new Eden…Awash in the glow of the sundered atoms’ rays…"

10. If you could tour with any band or bands who would it be and why?

More than anything they would have to be people we like. And touring…we did plenty of it in the past, in other bands. We’ve got families, careers, lives, obligations that keep us happy and fulfilled here in Chicago. Thats not to say we wouldn’t travel for the right thing but slogging across the States to play the Thirsty Whale on a Tuesday in Shitsburg…no thanks.

11.  Does the line blur between Prog and Metal today as there seems to be so many bands that have the love of both sound. Would you be interested in playing Prog Power Fest as well as Maryland Death Fest or is there a too extreme for the mass Prog rock music fan?

ARRIVER doesn’t completely fit the bill of either fest but we would be honored to play them. There is a good deal of early 90s Death Metal in our sound—Obituary, Carcass, Napalm Death, Brutal Truth—those are seminal bands for us. Honestly I don’t dig much “Prog-Metal” as it is generally defined: too noodley, prissy, clean, doesn’t rock enough…my favorite Progressive Metal bands would be early Melvins, "Catch 33"-era Meshuggah, and Mastodon’s “Crack the Skye” period. Those record cracked my skull open. If you are going to call it Metal its gotta be hard and heavy, and preferably have some dirt under the fingernails.

12. If you could cover any song and make it sound like an Arriver sound what would it be and why?

We’re a shitty cover band. We played Thin Lizzy’s “Ballad of a Hard Man” once but didn’t do it justice. That riff is some proggy shit there, especially the way Phil’s singing works against the rhythm. We were a bit more successful with Loop’s “Afterglow” which was in our set for a while. I don’t think we nailed that one either but it helped us turn a corner into delivering a motoric, droney sound.

13. What bands are impressing Arriver currently?

Bands I’ve seen recently that blew me away: Fight Amp, Gorguts, Meshuggah, High on Fire. New LPs from Dysrhythmia. Heron Oblivion, Sumac. And I gotta name drop friends we share the stage with in Chicago: Arbogast, (RIP) Swan King (RIP), Beak, Anatomy of Habit, the Coke Dares, Starless, Burned or Buried, Den, Cokegoat…awesome bands with great people in them who may or may not be the ones that get gushed about. All worth a look.

14. Any closing thoughts place here and thanks for the time

Nope. Thanks for caring about Underground Music