Skip to main content
Posted by The DoorwayTo December 28, 2016

A Province of Thay Interview is up ! 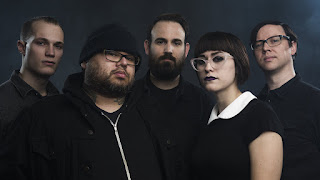 1. Your sound is those of Post Metal, Shoegaze and Ethereal elements. You sound more like a band from Europe  or a Indie band from 90's on Subpop, 4AD or Revelation  how did these unqiue sounds come to be to make A Province of Thay?

I think they came about on accident. We never really sat down together and said "we are gonna be a post metal band".
Many of us are just old and grew up on that stuff, so  when you have a steady diet many genres, and then start a band with out restrictions, it was very fortuitous in our resulting sound.
2. I  hear so much of bands like Alcest, Year of No Light, Jesu, Obsidian Kingdom, Old Dead Tree, KLMT 1918 and Anathema.why do this this  Shoegazing metallic sound as touch a nerve with so many in the 21st Century?

To me, there is something so soothing about that genre, it can be as loud as it can be but it will never be abrasive. That's definitely my attraction to bands like those. Also, they always have like this movie score feel to them. Like I could watch a movie and listen to hear of no light over the movie and it would sound so natural.
3. I know very little about Carrion Choir  is this your label or a label that you have signed with?

It's more like a production Moniker I came up with. I'm not sure if it will find its way on any of my other projects but we will see. I definitely have no aspirations of doing a true label though. It's a thankless job. Kudos to all of your indie label gurus out there, I could never do what you do.
4. Tied to that you seems to have a very strong DIY element with the band is that the only way Extreme underground band can  survive in 2016 ( Bandcamp, You Tube, Twitter and good PR) ?

I think that every band should definitely utilize every opportunity that comes their way. For us we didn't want to live in a musical environment of hustling to make it,  it was never about that for us. We just enjoy writing music and sharing it with as many people are willling to listen and love it with us. But we still love playing house shows,  and are just as comfortable on bigger bills as well. I definitely think music accessibility has come a long way from record distros at punk and hardcore shows. Why not make ourselves available?
5. Seattle where you are from has a very diverse musical since these days bands from  Earth, Alice in Chains, Wolves in the throne room to Demon Hunter. Where and how do you feel you fit into this very landscape ?

Awe man, those are some big names that we would feel so small to even be in the same room as! But one thing about seattles music scene is the connectivity. It's so great to be able to walk around Seattle and get a cup of coffee and run into someone from Dustmoth or grab some tacos with the dudes from xsuns. Still waiting for Jerry Cantrell to invite us over for tea and biscuits. But as far as musically, I think a lot of those bigger names in Seattle really shaped the next generation of musicians, and later a new bunch of musicians are gonna have bands like Serial Hawk, Dustmoth, and Theories as bands to emulate, maybe A Province of Thay? Ha wouldn't that be nice?
6. With the sound you create which is as much Theatrical and Epic in feel as Emotional and Driven . What bands are impressing the members of A Province of Thay?

Year of no Light and Braveyoung are two bands that the band hold in high esteem. We have had the honor of sharing bills with both of those bands and it was in both cases an almost religious experience.

7. If you could sign to a larger label is this something that would interest the band or is this DIY way the best for a band like A Province of Thay?

We wouldn't be opposed to it, it would be an interesting experience to write and perform music for a living. But even the rolls of a DIY band can be tiresome as is, touring, continuing cost of buying and maintaining equipment, and studio cost, it's a money suck for sure, so anything to curb that to make the experience better has to be worth the consideration.

8. The album cover for Atonement is very interesting what role and how does it play to the theme of the album?

I love that picture. Nate Burns did that for us. Outside of it's connection to the narrative I think it means something different to everyone. I definitely think that to me, a Unicorn, is thought of as one of the purest creatures in Lore. But in the end, everything feeds the earth. I think there is something to be said about the great equalizer that is death.

But you may pull a totally different meaning from that illustration and music that me. I thinks that's great!

9. If you had a budget to do a proper create a video off this album what one would it be and why?

Oh man. Probably Animus. That song is heavy with rejection and denial. There is not better antagonist than those dripping in self righteous denial of all their flaws. Animus is a reflection of that character.

10. What is a live show like for the band and audience how does it differ from recordings?

Actually our live show is very identical to our album. I dunno if that's a good thing or not, but we recorded that album the same way we practice those songs at rehearsal. And we tend to use effects and Amps we own, so that sound is replicable live. I'd love to go back and revisit our catalog and revamp some of those songs at some point in the future now that we have a new guitarist and drummer in our lineup.

11. Does Image play a role in a band like A Province of Thay?

Not really. Hah we used to  have this joke dress code of "only black button up shirts" but that lasted like 3 shows and then we didn't care anymore.

12. Where do you see the sound of the band heading with future releases?

We are working on that now, so far, the new material is taking a softer less aggressive approach. It's still somber in it's feel, but I find it a little more hopeful in the mood so far.
13. Do the members of the band play in other projects if so let my readers know a bit about the other projects.

Max is in a band called Ousters, it's a stoner metal project.
I am doing a project with my friends called slumberbox that's a litttle more in the vein of Small Brown Bike/ Braid
And Daniel is in a black metal project called Kihalas.

14. Thanks for the time and any closing thoughts place here.

I appreciate you listening to the album! And very sorry this took so long to get back to you. Hope you have a good new year!