Skip to main content
Posted by The DoorwayTo July 18, 2016 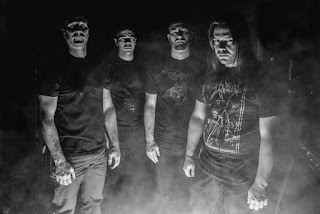 Phobocosm is a newer band to my ears I love the mix of Doom, Primitive Death metal and that Avant element over it all. Can you tell us a bit about the vision on the band?

When we formed the band, the initial vision we had in mind was to play uncompromising dark death metal, but as time went by, the doom elements kept creeping up more and more into our sound, which helped us make our songs sound even darker than we had first envisioned. We also like to use dissonance to create a sense of unease in the mind of the listener.

I hear elements of Incantation, Dolorian, Bolt Thrower and Morgion screaming through this album was it hard to get the Atmosphere and crushing heavy tone to meld in this manner?

Incantation certainly was a big influence in our early days, but I can’t say that the other three bands have influenced us in any way. It effectively took a while for us to find our sound and to master it, but it was really important for us to learn from bands that influenced us without copying any of them. We are still working on our sound and we will keep aiming for the next chapter in our evolution without straying from the path we initially chose to follow.

Bringer of Drought is such a mix of Speed vs Emotion in a very dark manner I can not say how impressed I am over all with that Doom vs Brutality that comes across. How was the album created was it music 1st or did the lyrical content give you the musical tone?

So far, we’ve always started with writing the parts for all of the instruments first and then lyrics, but we always make sure that the lyrical content fits the music and we put just as much thought and effort into lyrics as we do into our music. We don’t want to be like all of those bands whose lyrics are just plain embarrassing and stupid because to us, lyrics are just as important as the music is.

How does your last album differ from Bringer of Drought?

The new album is less chaotic and the doom elements are somewhat a little more present than they were on Deprived. We also had a lot of material to choose from, so we picked the song ideas that worked best together so that the album would flow better. We really wanted this new release to take the listener on a trip to a place where nothing but darkness and hopelessness are found.

If budget was not an issue and you could make a professional video for any track on Bringer of Drought what would it look like and what would you want people to get out of it?

We are not really huge fans of music videos except in rare occasions when they can stand on their own as a work of art. However, we do like to have visuals projected onstage behind us while we play. Our intention is to create a dark and hypnotizing mood when we play live, so having a 45-minute presentation that we can use onstage is a lot more interesting to us than some video that we would just upload on YouTube.

If tomorrow Dark Descent told you they worked out an option to have your next album on a Major label would you do it or is Dark Descent really the perfect place for a band like Phobocosm?

Dark Descent really is the perfect home for us. No major label would ever want to sign a band like ours, but if they did, we’d still stick with Dark Descent anyway because major labels are only in it for the wrong reasons and they don’t care for the bands that they sign, as long as they bring in the money (of course).

I know Montreal is a very eclectic musical realm with bands like Voivod, Godspeed you black emperor and Neuraxis all in the music scenes there.. How you see Phobocosm role in that French Canadian City?

The Montreal scene is indeed very eclectic as a whole, but I wish our metal scene would be more varied. Technical death metal is over-represented here and it we would like to see more dark death and doom metal bands popping up in our province. Fortunately, there are a few bands like Gorguts and Chthe’ilist that we really like, but it would be great if there were more.

Do the members of Phobocosm have musical projects outside this one ?

Yes, we do. Our drummer and I are in an old-school death metal band called Obsolete Mankind and our singer is also in Vengeful.

What music and books are impressing Phobocosm currently?

Lately, we’ve been listening to stuff like the new albums from Gorguts, Inter Arma and Inverloch among others. Our singer reads a lot of books so I asked him about it and here's what he had to say: "The last book I read was Meditations on Hunting by the Spanish philosopher José Ortega y Gasset, a very good and not too burdensome philosophical essay, whether you are interested in hunting or not. Another very good book I read recently is African Fractals by Ron Eglash. If you’re into mathematics and ethnology that is an absolute must read."

If you were to end the band today . Did you achieve more or less than you wanted as a band ?

We still have a lot to say musically and we would like to release a few more albums, but if the band were to end today, we’d still be proud of what we’ve accomplished so far. When we started this band, we set goals that we thought would take years to reach but we’ve been lucky enough to reach most of them a lot earlier than we expected. There’s still a lot
of things we want to accomplish though, so we’re not going anywhere.

Does Image or Theatrics play any role in the presentation of Phobocosm to the world ?

As I mentioned earlier, we like to use live visuals when we play live, but other than that, we’re not the type of band who wears a uniform or anything like that when we go onstage. We really spend a lot of time working on our artworks though if that counts because they have to represent the music, which believe me, is not easy when you’re not using occult or horror-inspired lyrics.

I wouldn’t know what song to pick. When we started playing together, we did play a few covers, but we have always tried to make them sound as close to the originals as possible, but after a while, we decided to concentrate on writing original material instead of investing our precious time in learning someone else’s songs.

The Rhythms of your music are so complex and avant it really plays a role in the atmosphere of the band’s sound. Was it always a goal to have such complex rhythms ?

We don’t really see our music as complex, quite the opposite actually, but maybe it’s just a matter of perception. We always made sure to keep our music relatively simple so that it’s easier to concentrate on the songs and their atmosphere rather than trying to impress people with really complex material.

How does the live show differ from your albums?

We’ve always tried to remain as true to our albums as possible when we play live, but we also make sure we play with as much intensity as possible. The live visuals we use also help create a certain mood that really adds something to the overall experience.

I really see Pain and Suffering a central theme in your music. What if any is the story behind Bringer of Pain?

Our music is inspired by pain and suffering because this is what inspires me to write riffs and songs, but the topics that we use in our lyrics are definitely more varied. However, we always make sure both our music and our lyrics remain as dark as possible.

How has the Digital age and Social media forever changed the landscape for Extreme underground music?  Are you a fan of this new age?

There are pros and cons to this revolution. On the one hand, it’s never been easier for bands to record albums and to spread their music, which is a good thing for underground
and independent bands. On the other hand, since it’s now really easy to release your own music, there are so many bands everywhere that quality is often diluted. It’s also now really hard to survive as an underground metal band since album sales are only a fraction of what they used to be, so pretty much everyone makes at least some money (labels, producers, promoters, sound and light technicians, etc.) but the bands themselves. You really have to plan everything carefully and to be wise in order to survive or else you’ll lose a ton of money and you’ll get fed up with being in a band.

Thank you for the time any closing thoughts here

Thanks a lot for the interview. We hope to meet you guys if we ever play in a town near you.