Skip to main content
Posted by The DoorwayTo July 17, 2016 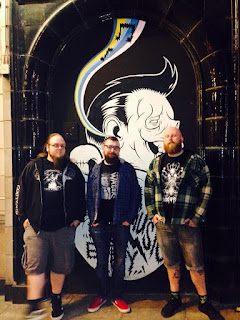 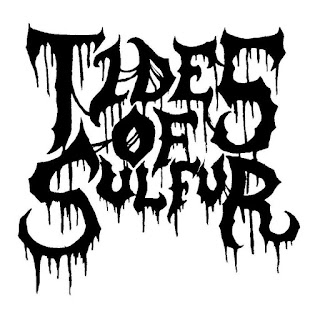 1. From the 1st blissful notes of Feedback and Dissidence Tides of sulfur are a mix of Nola/ Socal Sludge/Crust and UK Grindcore to me. How did this sound come to be?

2. Being from the UK I know you have some amazing Sludgy Doom Forces Iron Monkey, Esoteric, Moss, Conan, Electric Wizard and Fudge tunnel to name a few you are now part of that amazing heritage . Why do you think this kind of music thrives in the Island nation?

The uk just tend to make things that bit more gritty, a bit more tarnished in most forms of art. There's a lot of pent up aggression and frustration that tends to come out in our outlets...

3. Were did the name Tides of sulfur come from and how does it fit the bands sound and ideals?

We thought of Sulphur/Brimstone as an embodiment of evil and the tides being in unstoppable force of nature add those together and you get Tides Of Sulfur (we spell it this way because it was written this way in an old encyclopedia Chris found).

4. Are you fans of the digital age ( You Tube, Soundcloud, Bandcamp, Twitter and Webzines etc) or is Tides of sulfur more about the live show, vinyl and more the personal interactions that a band can give?

We are all about the live show. We are definitely a live band, it's where we feel most and home and ultimately if it doesn't work live what's the point? There's nothing worse than loving a bands recorded output then seeing them live and they are shit. We personally think the whole digital things isn't all that bad. It's a good way to get your stuff out there and hear new bands. Sending your mates links to new bands is the modern equivalent of tape trading in my eyes. I think we are all pretty old school as far as physical copies go plus it feels like a direct way of supporting bands you love. I'm always grabbing merch from bands we've seen or played with.

5. If you could tour with any band across the world one time who would it be and why?

Neurosis. Hands down. To be able to witness them decimate stages on a nightly basis and to be able to pick their brains and just learn from them would be an enlightening and humbling experience.

6. This world is becoming such a interconnected one and more violent one as the weeks and months go by; do you feel that bands like Tides of Sulfur is the release that is needed for the stresses of  world for underground music fans? As I know this is the only kind of music that lets me forget about the world and begin a new when the world is really hitting me hard.

I like the really nihilistic aggressive stuff because, as you say, it's a good way of switching off, nothing numbs you out quite like a wall of sound. Having said that I like knowing that there are other people out there just as fucked off as us about how shit humans are/organised religion is/corruption is rampant. Everyone who we've met along this path have been some of the most pleasant, friendly and enlightened of anyone we've met in life! Maybe the misery, vitriol and aggression inherent in the music cleanses people of their own negative feelings.

7. I do hear a lot of Grindcore as well more in the guitar tones not always the speed. I think it makes the band really stand out. What bands have really influenced that buzzsaw tone to the bands sound?

It's more the weight to the tone for us I think. The distorted, down tuned bass has alot to do with it and I think the main influence we all agree on are bands that cross that bridge between genres; bands like Bolt Thrower, Autopsy, Lord Mantis or Dragged Into Sunlight and the like. The actual tone itself for me was best summed up in a review I read in terrorizer of Bastard Priest's first album; "the guitars don't so much sound distorted as they do infected". I remember thinking 'that'll do' haha!

This is an interesting question! I suppose I'd want it to capture reality. When we play live, we want people to feel like their being drowned in a sea of negative energy, but in real life we're all quite mellow, we enjoy having a few laughs and what have you. It would probably be full of us sat around on our phones or watching some crap on Netflix! Getting high and watching Netflix takes up about 25% of Tom's life!

9. If the 3 of you could not play music starting tomorrow ever again what other creative outlets do you have? Anything that would surprise us?

We have other creative outlets. Music is life. We'd probably kill ourselves and/or other people without it.

10. Do the members of Tides of sulfur have other projects you are recording or playing under?

Chris is in a harsh noise project called Wraiths and Omens. You should check out Tom's old band H O M O H too!

11. What are the members of  Tides of sulfur currently listening to?

12. Is there one band that locally you want to talk about that is sinfully under exposed and the world should know about?

There are so many bands. Local bands, I'd have to say Dimensions, Pizzatramp, Lacertilia, Haast's Eagled and the Judas Cradle deserve recognition. If we were to travel a little further, you simply have to check out The Air Turned To Acid, those guys are phenomenal. Shout outs to Greenhorn, Victorian Whore Dogs, Batallions, Heriot and When Gods Burn too!

13. I read in press about a black metal connection to band and I don't hear it a bit as much as the Grind, Sludge, Crust and Doom/Death. I think people really mix extreme crust with Black metal way to often. What Black metal bands would you say inspired you?

The misanthropic outlook of Black Metal I would say is the biggest influence rather than the music itself. Chris loves his black metal; early Darkthrone, Mayhem and Gorgoroth specifically. Ant can't live with the production of the more cvlt bands so the influence comes from stuff like Altar of Plagues, Goatwhore etc, so when we are writing riffs, black metal pops up now and again.

14. In four words tell us what someone will get from a Tides of sulfur live show?

15. Thank you for the time any closing thoughts here?

Support your scene, kill your ego.