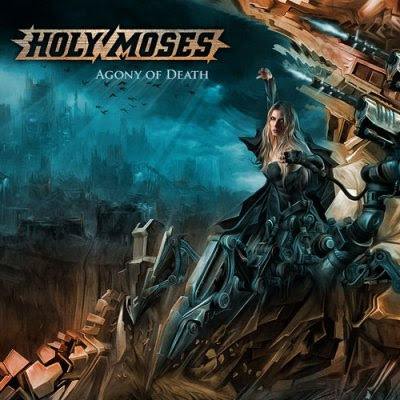 Is there a such thing a Death thrash??? If so then enter Holy Moses. As this is as if Exodus and Testament got a female death metal vocalist and I'm the first one to tell ya folks its really Goddamn Catchy, Crushing and just plain good. The guitarist are amazing the melody with those thrashing riffs works so well with the synth interludes and the very bottom heavy rhythmn section that still has a great hook to them. I'm told this is Holy Moses 12th CD . I must be under a rock or there big only on the other side of the Atlantic because I've never even heard of them before. Sabina Classen has a hell of set of pipes as this is powerful as hell music that she needs to work with and without an issue she takes the chore on and kicks it in the ass !!! This band is were I wish Arch Enemy would have taken there sound as wow Agony of Death with a proper push I hope now with SPV behind there label will get the respect the really deserve. This is Metal folks should be in everyone's top 10 for 2008 hands down.

Over the years Cruz Del Sur has had a quest to bring traditional and power metal to the forefront of the mainstream music world with very mixed results. With Reflection they have again come on the postive side of this fence and truth to be told this is one hell of a power metal release at that. It reminds me very much of Angra, Blind Guardian and even a bit of Dream Theater at times. The choruses and guitar/ bass work are the real winners here. As when the tracks become epic and massive in structure that is the time " When Shadows Fall" is at its peak of musical majesty. Reflection does a great job in the clean sung vocal department as well most time they all try to sound like Iron maiden and with this project he really has more of that Euro metal sound. Which I prefer . There is a lot in common with Rhapsody in the vocal arrangments. The only way you can truly see is by listening check them out I don't think you'll be Dissapointed. This is one odd project with just hearing a few tracks so far from this Experimental Metal band from Boston . I would have to say the mix elements of Drone, Grind, Jazz and Death Metal all in one . This is one fucked up unit creating quiet an explosion in sound. They are sure on the proper titled label as this is Sound Devastation. The vocals are from Screams to Cries of Agony to low gutteral growls and grunts. Ehnahre are straight out Sludge doom at time too esp on the 3rd track of which all are untitled as well. Members have been in the mighty Kayo Dot I see as well and there is a strong influence of there earlier works esp there Debut on Tzadik. I can't tell if there are horns are just ultra twisted synths to give the affect of disjointed horns going on but it work is the sorrow and darkened sounds that Ehnahre create. If your an extreme music fan and love it on the slow and doomy side you will not want to miss this excellent release.


Can we all say in unison HELL YA !!!!!!!! Matt Barlow is back where he belongs. I have nothing but respect for Tim Owens but the band had become a very different creation with him at the vocal ropes. He's a talent and was amazing in Judas Priest for me ears but after just one listen to this new Iced Earth platter. Mr Barlow has given me chills again It's like he never left. I have to be honest. The Dark Sage and Something Wicked this way comes are two of my all time favorite Cds in the Metal world ever. I saw Iced Earth in 1999 and they Blew me away live with there shear power and melody and its all back. Just listen to the guitar and vocal harmonies and you will be hooked. Jon Schaffer has written a Classic Iced Earth release once more. I really hope there going to do a tour in the US and I need to see and hear these tracks live and the power and might that they have on a big stage. It's just seem Matt Barlow knows how to make these style of guitars sound even bigger and more powerful with the way the vocals are presented. The even have a bone chilling power ballad called " A Gift ora curse" that must be heard... My fellow Iced Earth fans your wait is over the American Power Metal force is back and can wear the crown again unquestioned.

Brutallic Death metal on the Nth Scale. This is one deep guttural death metal force. That is also trying to blugeon you with some face smashing riffs being played at 200 mph. I've never heard of Execration before but they clearly love the 90's Tampa and NYC Death metal scen a whole lot by the sounds of this CD. If your liked bands like Human Remains, Incantation, Deicide and Middle Period Morbid Angel then this is going to be in your player for weeks if not months to come. The production on this slab of Metallic nastiness is second to none as well. You can hear every guitar , bass and drum line and the vocals are in the perfect place. There not buried but there not all up front of the music they use the voice as another layer of the complexity going on and that is so very important. Joesph and Vendlus has a Death metal power house in there roster now . Hats off to you for this. It's very hard to find good complex death metal today that doesnt want to taint it with Hardcore or Metalcore elements. Nice work....