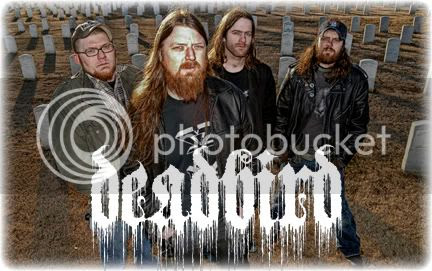 
1. Tell us how Deadbird came to be?
c: my brother(phillip-drums) and i have been playing music together since we were kids(well, teenagers at least), and we had a few other bands together before deadbird. we were playing in a band called ill conduit that we all really loved being a part of. our other guitar player at the time, terry, had some heavy personal shit go down and he needed to move back home to be closer to his family. at around the same time, our friends in rwake lost their guitarist and they asked me to play guitar for them. ill conduit, we decided, really would've been hard as fuck to keep going without terry in there. rwake has always been a band that we respect and admire in addition to being good friends, so i felt like there was no way to turn that opportunity down. anyway, i stayed with them for about a year and it was awesome, a true learning experience playing in one of the best bands ever, but my brother and i still had a strong need to jam with eachother. so, as much as i didn't want to leave rwake, the need to be in a band with my brother again was stronger so i moved back to fayetteville and we got to work on what became deadbird.

2. Deadbird is equal parts Eyehategod, His hero is gone, Neurosis and Crowbar. How did you come by this sound?
c:well, those are definitely some of our favorite bands and i think you can probably definitely hear some of that in our sound. but, we're really inspired by all sorts of shit. a lot of the older bands from zeppelin, skynyrd and floyd to metallica and motley crue. i grew up in the eighties so i was definitely down with a lot of the cock rock and shit like that. but i think our main influence is just each other and a bottle of whiskey in the jam room just jamming on the heaviest shit we can come up with. we have always placed the emphasis on whether or not what we're playing feels right in out hearts and our guts. that's always the main focus, rather than how technical or catchy we might could be.

3. You’re working with a very cool label At a Loss tell us how you signed with them.
c:hell yeah, joshua with at a loss has been real cool to us. we like and respect all the bands he's chosen to put out and he just has a real cool roster of bands. he put out rwake's second record 'if you walk before you crawl'. reid(our bass player, also plays bass in rwake) got ahold of joshua and asked if he was interested in putting out 'twilight ritual'. we sent him a copy and he was into the record so we just went from there.

4. Does Deadbird prefer to record or perform live?
c:i enjoy both equally. i have a studio in my house that we record all our shit in, so i'm probably a little biased. we all love to play live, but i'd say that me and reid are probably the ones that enjoy the studio side as well.

5. If there you were asked what Deadbird sounded like how would the band explain it?
c:slow, heavy southern rock doom

6. Where did the band Deadbird come from?
c:back when phillip and i were doing ill conduit, we came up with the idea to do like a real sparse kinda acoustic, piano thing that we were gonna call deadbird. we never got around to it(at least not yet), so when we got back together and got a new band going, the name was still floating around, so we went ahead and used it. i think maybe we might get around to doing something like that in the next year or two. we both like a lot of shit like the band low, godspeed! you black emperor, whiskeytown, etc., and we've always talked about doing something in that vein. i guess we'll have to call it something else now, though, since we stole the name from ourselves!

7. What are the bands thoughts on the digital age of Mp3’s, Webzines and Satelite Radio vs the old guard of CD’s Print media and analog radio?
c:it's a double edged sword in that it's made it a lot easier for underground bands who are in more remote areas or whatever to get the word out and get there music out there. we've set up whole tours just using the internet. but its definitely taken a lot of that magical 'discovery' element that we used to have. when you would search things out, traveling to the city to get to record stores that carried underground shit. everything was word of mouth and you had to know the right people to hear the cool new shit. we'd all trade information and cassette copies and shit like that. it just made it a lot more special when you found something that truly blew your mind.

8. You have a nice Myspace page do you feel there is no need for official made website for bands anymore with Myspace?
c:we used to have one, and i'd like to get another one going. it just takes money and myspace is free. i don't think it's neccesary anymore, but i think it's a nice way of putting some more information out there.

9. You worked with Billy Anderson on Twilight Ritual that must have been a blast he is the Jack Endino or Steve Albini on the Sludge/ Crust/Doom world. How did this come about?
c:we've all been huge fans of the work he's done for years now. neurosis' 'enemy of the sun' and sleep's 'jerusalem' are both milestones in the sonic realm(as well as musical realm). we tracked the record in our own studio and it took for fucking ever! we had a couple of lineup shifts and gear issues that added to the time we spent trying to get it done. as we got closer and closer and shit with the gear got sketchier(mainly our tape machine, which we've since fixed)i just kept thinking more and more that maybe it would be better if somebody outside of the band mixed the thing. i work at a bar and we tend to drink a little on the job. so, one night at work, i was on the computer and because i had a few drinks in me, i just said fuck it and emailed billy to ask if he would be into mixing out record. he got back to us the next day and it just went from there. we're real proud of the mix that he did for us.

10. You’re on the road how is that going are the crowds into what you do live?
c:we had the best reception that we've gotten so far on this last tour. we played a lot of great cities with a lot of great bands/friends that we know and people came out and supported. it was awesome and we can't wait to get out there again.

11. Are there any band out there that move Deadbird currently?
c:we're all big fans of music and always seeking out new shit to listen to. i've personally been listening to a lot of older shit lately. burzum, rush, black crowes, judas priest, and of course always jamming shit like tradgedy, wolfbrigade, neurosis, his hero is gone, trouble. that new record by ascend is really cool. and i can't wait to hear the new ac/dc.

12. What are your thoughts on the currently US extreme metal and hardcore scene is it growing or becoming very stagnant again
c.i guess it just depends on where you're looking. i think there's alot of shit that i refer to as 'mallcore' that is a very watered down, homogenized commercial version of extreme metal and hardcore and that kinda shit can be frustrasting in that it feels like kids are taking the things that we hold sacred to our heart and have lived by for years and kinda heartlessly twisting them into some sort of commercial package that gets pushed to kids at the mall. on the other end, though, it does seem that metal as a whole, not just the fake shit, is receiving a lot of attention again. it doesn't really matter as any of us who have been into metal for a long time knows, cause metal is always gonna be here whether it is commercially accepted or not. once this fad passes, the big media will say metal is dead again, and then we will all carry on as we did before ozzfest and they're will be a lot less 'hipsters' and 'trendjumpers' at the gigs.

13. The artwork on Twilight Ritual is amazing tell us about that. Who did it and how does it fit the theme of the release.
c:john baizley from baroness did an awesome job on the artwork and when we finally got the packaged cd in the mail, we were real excited about how the whole thing came together. we've played a few shows with baroness and those guys have always been real cool to us. we've had a lot of respect for them since they came out, and john is an awesome artist, so we were real happy to get to have him do the work. he's seen us play and he listened to the record and read the lyrics before he did the art and it makes all the difference when somebody searches it out like that. i think it captures the whole sonic and emotional vibe of the record well.

14. Thank you for your time any closing thought’s please place here
c:thanks for listening and being interested in out music. we'll be back on the road at the first of the year and we will be trying to go everywhere that we can, so hopefully we'll see you out there!