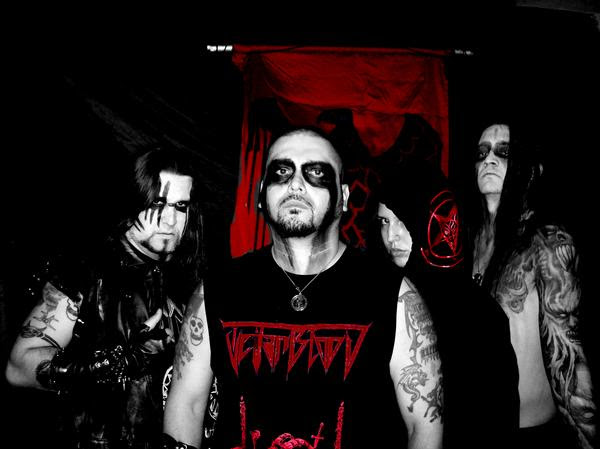 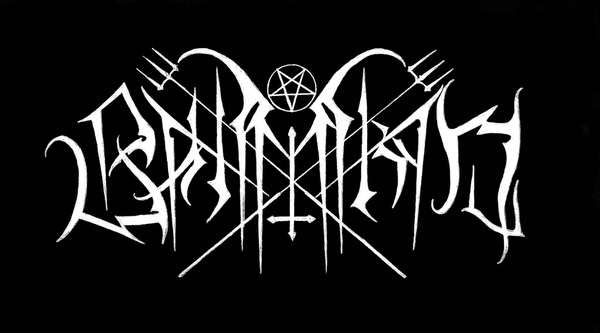 
1. Give those of us new to this band a history of the dark and
ritualistic history of Bahimiron

Grimlord: Well, after I left Imprecation in ’94 I started working on Bahimiron due
to my ever growing passion for unholy black metal. Imprecation was fulfilling in
the dark and evil sense of death metal, but with my appreciation for the early
BM such as “the Oath of the Goat” by Impaled Nazarene, Blasphemy’s “Fallen Angel
of Doom”, as well as the early Nordic black metal cult drew me into the spell.
I feel that it is fortunate that the musicians that I was working with at the
time were not serious about pursuing Bahimiron, because I found the correct
individuals to flesh it out into reality through Blaash (Wheresmyskin ‘zine) and
JenOside and later down the line Krag Daggon.

2. You just release an amazing black metal assault called " Southern
Nihilizm" on Moribund . How did you come to work with Odin and " The Cult"

Blaash – Odin contacted us first a couple years ago when we first sent our 02
demo to him, and he stated that perhaps in the future we could work together..
However, it was not until after we released our first LP that he contacted us
and we then decided it was time to join the cult….

3.How does this release differ from early works?


Grimlord: I feel that first of all it is our first real complete work as we
have had many splits, 7 inch releases, and comps. Also our first LP
“Pure Negativism: In Allegiance with Self Wreckage” was a mix of new and
old stuff, versus “Southern Nihilizm” being completely new material. I feet
that the overall vibe on “Southern..” is true to who we are as a band, and you
can hear it within every song that is on the album. No song contributed to
the assault was filler in any sense of the word.

4. I know that Absu is from Texas are there many Black metal bands in
the scene or are you one of the few to break out of the area.

Grimlord: There are some worthy cults reigning in the Lone Star state,
some alive and some dead (though their magick still reigns supreme in their
non-existence). Some of my faves include Averse Sefira, Obeisance, Necrovore,
Blaspherian, Divine Eve, Magus, Dark Reign, Black Reign, Thornspawn, Demonhammer, Brown Jenkins, Dagon, Pyre, Kathonik, Adumus, Rigor Mortis, Morbid Scream,Malignant Terror, Auschwitz, and of course early Imprecation. I would also like
to send heilz to Unchrist even though they are more of a merger between
Texas/Louisiana.

Grimlord: We are more partial to doing one-off shows vs. doing the road
thing though. We are going to strike Los Angeles in the summer in support of
Inquisition, and are playing two shows in Texas with Horna in the fall. If
anything else comes up and the compensation is right we would be up for it, I
would definitely like to do New York/New Jersey again, always good to be up there.

6. I'm sure you sick of this question but does anyone give you shit
for having female member in a very extreme Black metal band. I think she tears
it up and the bass line are sick as hell. Just wondering esp live.

Grimlord: No one has given me any shit personally, but I would laugh in their faggot faces if they did though!
Jen is, in my opinion, burning with the most hate within the band. Hell, she is always at war with someone,
and I will always have her back as she is like a sister to me. I agree that her mangled bass lines are indeed sick
as fuck, she is the pulse of our beast.

7. With the new release there are so many elements going on there is even a Neoclassical and Doom vibe going on in certain track. Do you feel experimenting is the only way Black metal will survive.


Grimlord: We just vomit out what channels the bloodshed within us. I could give a fuck if anyone thinks that
experimenting within black metal is weak or unworthy of the cult, my opinion on this is that if it channels
violent, angry, sick evil action and or thoughts then it has to be worthwhile. I cannot speak for the entire band,
but great doooom and evil ambience is a big part of my listening displeasure. Take for an example a band like
the Portal. They bring the nightmare imagery to both the audio and visual senses that make them completely
original but yet they still carry the vibe of what real black or extreme music is all about, and I embrace that to
the fullest.

8. Whats you thoughts as a band on the current state of USBM???

Grimlord: I fully support the genuine bands. I piss on the faggots that call themselves black metal and do
their share of “praizin’ the Devil” and dressing the part, but do not know what they are writing about lyrically
and musically and have merch stands that sell beach towels and/or balls, coffee mugs, and other crap with
their logo on it. They are why the rest of the globe sees USBM as crap. I think bands like Leviathan, Inquisition
, Black Witchery, Demoncy, Averse Sefira, Ashdautus, Ibex Throne (RIP), Grand Belial’s Key, Abazagorath, Kult
of Azazel, Amputator, Thornspawn, Profanatica, and others speak for themselves as serious and evil craft.
It is in the strength of these bands and some others that make the USBM scene worthy to stand in the trenches
with the rest of the globe.

9. Whats Bahimiron feelings on the new digital age with Myspace and Mp3 downloads and they way of the CD and Vinyl slowing down. Is is a curse or just a new way of thinking for the underground scene.

Grimlord: eh, I am mixed about it. The main thing I hate about the new underground is that it enables a
bunch of crappy faggot bands to flood the scene with their passing fads. I do miss the discovery of new
music through the postal system, it made it seem like more of a find of some evil treasure, when it was good,
versus a simple click of a mouse to determine whether or not you want to bother with the music.

10. Is Corpse Paint a right of passage for extreme Black metal or is
it more personal for a band like yourselves?


Grimlord: I feel that it keeps the essence of this music the way it should be, shadowed and mysterious.
It can, in the wrong hands, come across as campy and laughable. But if the music involved truly channels
the poison of black metal it can be very effective.

11. Does Bahimiron prefer to record or perform live?


Grimlord: Recording sucks but the end result is definitely worthwhile (usually). I actually prefer playing live
in a rehearsal space versus on a stage as the rehearsal space usually conjures up a more violent conviction, as
you are able to eliminate problems that come with playing live such as bad sound men, uninspired lighting,
crappy PA systems, and expensive alcohol!

12. What is the ultimate goal for a band like Bahimiron to present to
the world at large.


Grimlord: Nothing. We have no goals for this band, just to keep spilling the hatred here in the trenches of shit.