Skip to main content
Posted by The DoorwayTo December 07, 2017

Cormorant Interview is up ... 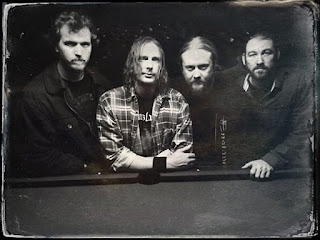 1. The progressive and melodic death elements are strong in Cormorant. Tell us a bit of the band and it's past?
Cormorant started back in 2007 as a three-piece melodic death metal band. I joined in 2008 when the guys were looking to expand their sound by adding a second guitarist. I remember those early days being really exciting because we were trying to find our common ground as four different musicians with distinct influences and styles, and I think that’s why our debut LP, Metazoa, is so varied. We didn’t really care about the potential issues of hopping between styles because we worked really hard on transitions and arrangements to make sure the music had a good flow to it. Over the years, we’ve obviously grown as musicians and have a clearer idea of what we want to accomplish when we write songs, but our myriad influences are always there in some form.

2. Disapora look to be your 4th release how does it differ from the others?
Well, the most apparent difference between Diaspora and our previous albums is the length of the songs, two of which are the longest we’ve ever written. That’s not something we set out to do on purpose, but as we were composing the music that would eventually become “Sentinel” and “Migration,” something about the flow and energy of the riffs made us want to keep going and see how far we could take certain ideas. We’ve always had long songs, but this time we wanted to experiment with long-form composition and see how well we could hold a narrative thread throughout extended pieces of music. Personally, I was influenced by Rush’s 2112 and Yes’ Close to the Edge while we were chopping away at “Migration” and figuring out where it should go. In the end, we did what we always do and trusted our instincts to lead the way.

3. I would say there are some symphonic black metal elements in the band as well. Are you influenced by bands like Emperor or Dimmu Borgir ?
We definitely like both of those bands and we’ve probably been influenced in some way by their melodic riffing styles, but I wouldn’t point to them as specific influences for the Cormorant sound. That said, I definitely had ICS Vortex in mind for some of my singing parts on Metazoa!

4. What topics seem to work best when writing songs for Cormorant?
That’s an interesting question because we usually approach songwriting from a “music first” perspective, which means the lyrical topics come after all the music has already been written. We’ve found that’s the best process for our writing style and we’ve stuck with it for pretty much every album. That said, whenever we’re working on a new song, I usually have some ideas in my head for lyrical concepts that could be a good match for the emotional qualities of the music. And since our lyrics are written in a narrative style, I always keep my ears open for interesting stories I hear in my daily life that could be incorporated into a song. Like “Sentinel” came about from me listening to a podcast about Ötzi the Iceman, this preserved mummy they found in Italy that totally changed the way scientists thought of early humans. I started thinking about how interesting it would be to write lyrics from this mummy’s perspective—frozen in time, he “watched” mankind evolve into this strange creature that’s trapped in a bizarre cycle of avarice.

5. There seems to be a strong DIY style and ideal to the band . In the 21st century do bands really just need good pr and social media push to get name out ?
Bands can do a lot themselves, but it definitely takes a lot of time, money and effort to get any sort of momentum going. We’ve had 10 years of experience doing things on our own and we still learn things about the DIY process that we didn’t know before. I guess it all depends on your goals. Some bands sign bad deals because they want to tour a lot and make their money that way, which can definitely work, but the success stories seem to be few and far between. For us, we just value having control over our music above anything else, so we’ve kept most everything in-house. We worked with Blood Music on vinyl releases of our first three LPs, and that was a great experience because both sides wanted the same thing, but that’s not always the case.

6. Following up on last question would you sign to label it then offered something for band or not interested?
Yes, we’ve always said we’d sign to a label if the situation was right, and we’ve come close to signing many times, but so far nothing has been worth the tradeoff. And we totally get where these labels are coming from—this is an underground, niche style of music that doesn’t have a lot of potential for making money, so if you’re running a label and just trying to pay your goddamn rent, of course you’re going to try to skew a record contract in your favor. It’s nobody’s fault, it’s just the nature of this industry these days. We’re just glad we have great platforms like Bandcamp and excellent people like our publicist, Liz, to help us spread the word to as many people as possible.

7. On Disapora the 4 tracks are rather long and complex while keeping a very interesting mix of extreme and catchy.  What was the process to create this album and at end of the day did it turn out they way envisioned or something else?
The Diaspora process was the same as it always is for us—we get together twice a week at our rehearsal studio in Petaluma and put together ideas until they form into songs. The first tune we wrote for this album was “Migration,” which ended up being 26 minutes long. We were actually playing a version of it on the 2015 tour we did for Earth Diver, so it has been around for a while. The other three songs were written throughout 2015 and 2016. Everything turned out how we envisioned because we spent many hours honing the riffs and transitions to get them exactly where they needed to be. Greg Wilkinson’s extremely heavy production was the last piece of the puzzle, especially for the funeral doom influences we incorporated.

8. What is a live show like and how does it differ from albums?
Our live show is pretty straightforward with the exception of our floor lights and, occasionally, fog machine. We’ve always been a band that lets the music speak for itself, so we pretty much just plug in and bash out our songs to the best of our ability. Obviously, on certain songs we’re missing studio elements like keyboards and cello, but since the songs are originally written without any of those things in mind, the main instruments carry most of the recognizable melodies, so it transfers pretty well.

9. In 5 words describe the bands over all sound to my readers .
Progressive black/death. Many riffs.

10. Youre from northern California how has the scene embraced Cormorant ?.. there is a strong history of extreme thrash and death metal from that area..
Our scene is pretty awesome and we’ve been fortunate to play a lot of shows with many great bands over the years, from local legends like Giant Squid and Hammers of Misfortune to international touring bands like At the Gates and Ne Obliviscaris. Most national tours make a stop somewhere in the Bay Area, so it’s always an honor when we get asked to be on a bill with bands we listen to and respect. We’re an interesting band because we can be placed on a wide variety of bills without seeming too out of place. If it’s a black metal show, we can play that type of set, and if it’s a death metal show, we have songs that lean more toward that sound.

11. What music and bands are impressing Cormorant currently?
My two favorite albums this year were Pallbearer’s Heartless and Enslaved’s E—I love everything those two bands do, but these new albums are on a different level for me. I’ve also been digging the new stuff from Chaos Moon, The Ruins of Beverast, Ufomammut, Squalus, Immolation, Spectral Voice, Tchornobog and Dreadnought, to name a few. 2017 was killer for metal releases!

12. Do the members of the band have other projects you.would like us to check out or is Cormorant the focal point period?
Nick, Brennan and I have a doom metal band called URSA that plays pretty regularly around the Bay Area. I play bass and sing in that project, so it’s a totally different vibe than Cormorant. It’s a fun outlet because the writing style is much more streamlined—if it ain’t doom, it ain’t going in the song. We’re looking to record our debut album in 2018 so watch out for that. Marcus is in a thrash/metalcore band called Vengince that has been around for a long time; they’ve done many tours in Europe and they still play locally. But Cormorant is definitely the focal point for all of us in terms of time and energy spent.

13. If Cormorant could make a proper video for any track off new album what track and how would it represent the band?
Oh man, I would love to make “Migration” into a video but that would be more like a short film! That’s actually a pretty interesting idea. The narrative structure is already there in the lyrics so it would just be a matter of filming and editing it in an interesting way. If any independent filmmakers are reading this, hit us up!

14 . The artwork must play a role in story of album . It's very impressive tell us about it
Artwork is always an important aspect of our band, and Diaspora was no exception. When we decided we were going to follow this “migration” theme, we knew the art should take a similar path, so we started talking about basic concepts and layout ideas. I had recently heard Ur Draugr’s album The Wretched Ascetic and I was totally blown away by its bizarre, strangely beautiful cover art, and when I showed the guys they felt the same way, so we reached out to the artist, Jeff Christensen, to see if he’d be interested in working on our project. He was totally into the idea, so we sent him some ideas and demos we made of the new songs so he could get an idea of what we wanted. When he sent back his initial sketches, we were amazed. Jeff is a very gifted visionary artist and he has total control over his medium, so we decided to eschew giving him little details to change and just let him run with his concept. When he turned in his final four-panel painting, we knew we had something special. I recommend looking at the entire piece while listening to the album, because Jeff painted with the music and lyrics in mind, so there’s a certain synergy at play.

15. Thank you for the time any closing thoughts here.
Thank you for the interview and your interest in our new album! If anyone wants to order vinyl, CDs or T-shirts, they can go to cormorant.bandcamp.com. Thanks for supporting independent music!