Skip to main content
Posted by The DoorwayTo April 04, 2016 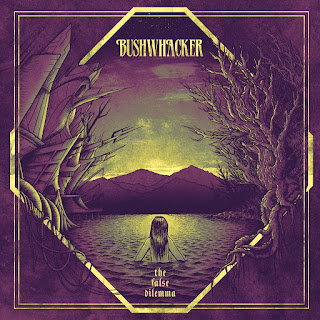 This is one strange and complex metallic journey to say the least. I would like to be the 1st and maybe only to say I don't hear Black metal in this album at all . Bushwhacker mix elements of Thrash and Death Metal is a very Prog like manner with some kick ass grooves going on. Maybe in the vocals there is a bit of that 90's Symphonic Black metal style as I can here Ihsahn's vocals going on here but if you where to full on ask me this is so much more a Death metal band that loves late 80's Thrash metal and Bushwhacker like to very much toy with Post Metal elements in the same way bands like Mastodon, Opeth, Gojira, Devin Townsend and Red Harvest do. Love the layers and complexity of riffs going on and the band do often have a very Prog metal thing going imagine Amorphis without the organs or even Kreator with a bit more prog element. I know it sounds odd but damn is this band talented and made one hell over release . Check them out.

The very symphonic / orchestral intro is a real throw off to what the band is going to present to you which is very simply Brutal and Guttural Death metal that through out the mid 90's to early 00's which was what extreme metal what presenting us. If you like anything Death metal from Relapse, Roadrunner, Nuclear Blast or Earache from that time then you know where we are going from. They would add element of melodic riffs into blistering breakdown and low guttural Vokills and a drummer that you swear was wound up to keep playing at that level. Bestial Deformed also has the amazing mid tempo Double kick and heavy Prog metal elements going on trying to get you off kilter always. They are a brilliant example of how Death metal doesn't need to be different . There are so many creative parts within the genre to still make very original sounding music..

I will begin with a short thought about a musical genre that is never going to break sales records or get mass appeal but for this reviewer is a music that made me create music for almost 10 yrs . This would be funeral doom. The minimalism, The punishing tones, The sorrow and hope that it creates all in the presentation. Normally these tracks are not short and can be at times just two or three track to fill a full 50+ minute lp . With at said Funeral Moth mix Funeral Doom and Post Rock into a sound that is as soul stirring as it is empowering . If you like bands like  Dolorian, Ras Algethi, Russian Circles, Skepticsm, My Dying Bride early on . This albim consists of just two tracks lasting almost 40 minutes. I would say there are elements of 3rd and the Mortal and Mogwai as well .. Very very dark and atmospheric is there this comes from . The somber elements work with ambient deep drones as well as those ultra low death vocals. I can not say enough impressive things about this release. If a fan of the doom genre this is an album not to miss.