Skip to main content
Posted by The DoorwayTo October 15, 2013

Malokul Artist Drugs of Faith Interview is up 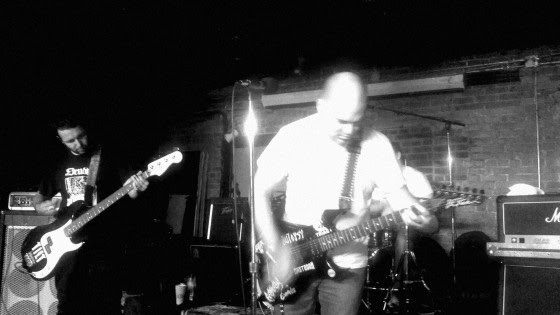 We sure don’t fit into one music category. It’s the mix of influences that we have, and just as important, or more important, is how we put them together, I think. We never wanted to mash it all together without any sense of flow in order for it to sound crazy, if that makes sense.


Well, to give you the rundown, we had one song on a Terrorizer Magazine comp, two songs on a Relapse Records comp, and the rest of our “official” releases have been on Selfmadegod. The other labels in the mix have been vinyl versions: Fast & Furious did our self-titled wax and we put out the Corroded  wax ourselves. We’re going to do our next full-length on Selfmadegod—it’s the label we’re signed to—hopefully in 2014. And then again, they won’t do the vinyl version then either!


There are lots of scenes in this area—Northern Virginia, D.C., Maryland—and indie and HC are just two of them. To name a couple of bands from each: Passing Phases and Tideland for indie, and for hardcore, and I use that term somewhat loosely, you have B.S.R. and Möbius Strip. There are several very young powerviolence bands that have come out that are worth mentioning, two of which are Vile Faith and Black Sparks.


I usually say something about us being a mix of rock, metal and grind. And then maybe I would start getting more specific if the conversation went that way.


We did a His Hero Is Gone cover on Corroded, so there you go. I listened to a ton of Kiss when I was young. The bands that rubbed off on me won’t be too surprising, I think: Voivod, Napalm Death and Killing Joke are some of the major ones. Mick Harris, ex of Napalm Death, I think it was, said once that it’s fine to have your influences, but you’ve got to move beyond them. I haven’t gotten there quite yet!


Yeah, we already have a fistful of riffs for the next full-length. I wouldn’t say we’re going to have enough songs to record one soon. It’s going to be a while.


I do miss the old ways, but it’s quite something to look up bands on blogs and dig for them on YouTube. I would say MySpace, but you know, at some point everybody left that platform, so it was only bands and PR companies marketing to each other at that point. I have a blog that used to be a zine, and I get overwhelmed by digital promos. I’m not able to get through them all. Of course, in the physical promo days I’d get overwhelmed then too, but it took a lot longer.


8.Is there a running theme in the songs or releases of Drugs of faith?
Lyrically I’d say, more than the music. For a while we’ve been talking politics, but in a vague way so that they’re hopefully open to interpretation. Musically, we try to keep that mix going, and we have some tunes that we call our “rock songs” that don’t have especially fast parts in them, and don’t jump around as much. So those elements I think will keep appearing.


9. What are the members of Drugs of faith listening too and does it ever influence the sound of new songs?
I’m doing a Slayer cover band for Halloween with some guys and I’m wondering if I’ll end up writing some “shredding” riffs in the future. Taryn doesn’t listen to much metal, but she has a few staples like one Hypocrisy record and some Iron Maiden and Black Sabbath. I listen to a lot of it, along with old-school death metal, grind and all the rest of it. But then there’s things like Smashing Pumpkins or newer Ulver, for example. You have to mix it up with other things so you can keep your horizons broad.


10. When you perform do you feel more at home with metal bills or the punk/hardcore diy shows?


We don’t play metal bills much, unfortunately. I’d like to do that more often to see how we come across. I’d be fine with a stage of any size and some monitors. But DIY shows are good too as long as there’s some awesome energy. It comes down to whether the show is fun or not.


11. Do the members of the band have other musical projects as well or is this the focus for the band only?
I’m one of the singers in Agoraphobic Nosebleed, but there’s not a lot going on there lately since Scott Hull has been concentrating on Pig Destroyer. Also I’ve got my blog. Taryn has had a folk project that she does solo, but that’s for her own satisfaction instead of trying to get music out or play shows. We’ve got plenty going on so that the band isn’t the main focus.


12. Were did the name Drugs of faith come from?


I was in a band and we discovered that our name was already being used by two or three others, and it wasn’t a very good one anyway. So the drummer suggested Drugs of Faith, and it got rejected. So when I started this band, I stole it!


13. Thank you for the time any closing thoughts here?


Thank you as well. Talk about old school, this interview was very old school.