The Order of Apollyon- The Flesh-CD (Listenable Records)
Listenable over the years have become well known for Modern sounding Black Death with a heavy Prog or experimental element to what is going on here we have The Order of Apollyon. Mixing all those elements into a stew of talent, passion and pain. The music comes on the more Death metal side where the vocals are the Blackened part of the release. If your a fan on more modern bands like  Saytricon, Khold, Disiplin and Marduk this will make you all the more happy. There is an industrial element to the album as a whole but it never becomes the major focus. The more Tech Death metal sound comes across in in the guitars and drumming esp.  There is a groove and catchy factor to all of this .. As this album move along there is a very Samael and Celtic Frost vibe to all of the madness here . Again The Order of Apollyon is all parts of the whole . One without the other could not exist..
http://listenable.net/

The Very End- Mercy & Misery-CD (SPV)
Horns up suckers .. What we have here is massive German Thrash in the highest of order. The vocals are graveled and the music is fast, catchy and balls out .. Love the galloping bass and guitar work. If your a fan of Sodom or Kreater this is going punch you square in the face. The for the suprising part is they have a love for american bands like Nevermore, DRI and Testament just to mix the more power metal and hardcore elements in to a record that has actually made me smile over the 1st 4 songs. I really glad great metal is coming back not about trends or focus groups. The Very End is metal and do you really need more I think not...
http://www.myspace.com/spvmusic

NIDINGR-Wolf Father-CD (Vendlus/ Jester Records)
Avant Black metal from member of 1349, Mayhem, DHG and Gorgoroth a few bands. It's been 5 yrs since Teloch has gotten the band in force again and this time Garm / Kris of Ulver makes a guest appearance. Nidingr is everything you expect it to be fast, chaotic, progressive, industrial and production to the hilt to make this sound as an army is coming to get you. There is a lot in coming with bands like Code and DHG going on here as you would expect. I would say the most magical part of Nidingr is the much more raw quality that the band takes on with all the very technicial moments. It reminds me a lot of a band called Enochian Cresent. Nidingr has a lot in common with Virus to in the structure and arrangements of the music. This i what I love the most in occult metal.. THE POST BLACK METAL SOUND!!!!.
http://vendlus.com/

Someone went and bought a ton of Korn and Early SlipKnot Albums and said hey lets start a band.. Why would you want to be such a cover band in the making  .. As this another band this band sound like. I can not get past 3 songs of this Rap/Groove  Nu Metal BS..  Done...


The Black Metal War machine comes at us with all barrels loaded with Cavus. This band has one single mission to be the most brutal and bombastic Blackened Death Force in the world. The mix elements of Immortal, Bolt Thrower, Marduk, Panzerchrist and Gorgoroth all into a pool of blood, hate and torment to make this gem of a release. I don't ever remember hearing Cavus before but I will soon not forget them. Listenable has one on of the most impressive " War Metal" I will call it ever..  Really impressed by this band and the corpse paint make them all the more threatening in person...  Just remember a few year from now when this band is on the cover of every important extreme metal mag.. AZM told you about them and get this release A.S.A.P without fail... 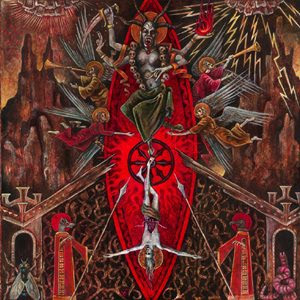 Blackened Thrash with some strong Death Metal touches.  This band really has it all for extreme metal fans. Mix Slayer, Carcass, Bathory and to my ears there is a lot of Morbid Angel going on in Weapon.. The Black metal and that weapon most remind me of are Watain and Mayhem.. This is a complex listen to say the least. The vocals are commanding and deep with out going total guttural in nature.. The guitar and bass go from Blistering to Mid tempo and melodic. The drums go all over the place but are never over played and that is crucial to the sound that weapon creates. Weapon are Occult in themes and style there is no mistaking this but with Weapon as I said there are so many layers going I don't think this will ever be the same listen twice.  Weapon have a proggish eastern element going on as well that comes out from time to time. Haunting, Grueling, Hypnotic and Massive these are all things that come to mind when ripping through the band known as Weapon..