There is always an air of uncertainty to this project. The cross the lines of many genres, Goth, Ethereal, Black Metal, Avant Rock and Prog elements . The Vision Bleak have always reminded me of Arcturus, Sisters of Mercy and Devil Doll all rolled into a tasty aural attack on the senses. This time around there are moments were Borknagar, Bogus Blimp really shine on their sound. I love the work of Clean more gothic vocals with the harsh and grim vocals mixed within. The music is Acoustic, Symphonic and full on Black metal at time as I was talking about. These two masterminds behind the project layer so many feelings and emotions with each track they are the same from track to track. With Set sail to mystery The Vision Bleak have come in to the Symphonic Post Metal world with a fire I have not heard from them before this is a massive undertaking its of a cinematic journey they just a simple musical release. There is not really much more to say then WOW... And if The Vision Bleak can keep this up there legions and legends will nothing but Grow.. Mr Doctor would be so proud for you my friends...

When I heard Karma to Burn a long running Instrumental Fuzz Rock outfit signed to Napalm it really took back as labels like Meteor City, SPV, Tee pee or even Rise Above would have been a much more a place a band like this would fit. With there lazy blues meets 70's Rock sound. Karma to Burn are really good at the sound they create actually there quite brilliant . They have all the elements to make them an Area rock fave minus a vocalist. Think Mountain, Grank Funk Railroad, Triumph and Kiss all rolled into one then just for the hell of it Had the Country element so Southern fry the sound. Karma to burn make you feet move and make the stress of the day just go away and sometimes you just really need a kick ass rock band you know what this is what you have here. They do get into the Kyuss sounds but never that low end. So I guess Desert Rock is a strong influence of it all as well. Napalm this will take you into uncharted areas and maybe that what a label mostly known for Goth Metal and Black metal needs.. My hats of to you all for this signing . I really needed this album this is driving music for sure...

This band just reminds me of all things I love about Doom music . The Ritualistic Slow almost Hypnotic sounds of a Blackened Hellish world where most hope is lost.. Culted are at home with bands like Thergothon, Ancient Wisdom, Mournfull Congregation and even label mates Unearthly Trance. I love the very sludge sound that vocals and guitars have its almost that raw punk element that bands like Eyehategod and Cavity used so well over the years. There are just 4 tracks on this undertaking but where this record really give me a major hard on is with the cover of Whore by Swans... Culted give a bands that invented a genre of Gloom and Doom the most amazing retelling of a great Swans songs to being with. I would like to think that Culted could be an Industrial Doom force like Godflesh or Phobos if they continue down this path. Of Death and Ritual is 4 tracks of Doom perfection... 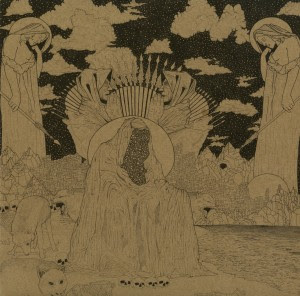 Dirty Groove based Bluesy Crust/ Sludge/Blackened metal in the highest of orders. If you like bands like His Hero is Gone, Cavity, High on Fire, Kylesa and Noothgrush then you have found the band to move over with and love for yrs to come this would have been one of the bands that was signed to Pesimester, Bacteria Sour, Hydra head or Southern Lord very fast. As they hold all those elements you need. The Chaos and Fury mixed with Feedback and that Westcoast hardcore sound. A band like Inter Arma could play with a band like Sick of it all just as well as Eyehategod and both crowds would love them. Forcefield as been impressing the hell out of me with there release keep it it up. This band is just ugly all around and I so proud to have heard it.

Epic and Violent Black metal is what my ears are always the most pleased with when it comes from band of this style. There is a blistering and dissident hate that comes from bands like Nightbringer and a cold and rejecting melody that you just can not hide. Bands like Nightbringer make you see how mortal we really are and that the war for humanity its very continuation is very very near. Nightbringer has a hyper drumming style that work so very well with the higher end treble guitars, the symphonic elements in the backdrop that almost border on avantgarde. The vocals are just so raw and ritualistic in composition they can be no other way. When the band goes a bit more melodic you really can hear the power and might behind what they are creating. Ajna Offensive with Moribund are the premier Occult/ Underground metal labels in the US today . Nightbringer is actually even unsettling in sound to me and I've been listening to bands like this for years. Apocalypse Sun is really just a cut above the rest here.. 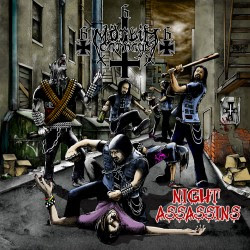 Pulverised seems again to continue with its love of all things late 80's Bay area and German thrash and with Morbid Carnage there is no love lost here my friends. This reminds me so much of early Exodus and and Sodom its not even funny. There is a strong love of Forbidden Evil and Early Kreator . The solo work is a wammy bar fest as you would expect no less from. The Polka beats soar far and wide here with no abandon. The Sore throat vocals of classic thrash as well are here so all in all. A Thrash Classic for 2010. Can you really ask for more.... Holy second coming of Isis ,Neurosis, Earth and Mogwai. Ufomammut is just that Doomy Post Rock with a Stoner element they are in no way a stoner rock band as some call them. There is way to much Doom and experimental guitar work going on here they remind me a lot of SubArachnoid Space in sound and textures from the way to guitar is more a tool then just a stringed musical item. I love the long Droning elements of it all. The vocals are more like eastern chants an and spoken passages and add to the incantation feelings. At times this band just gets so damn heavy it makes me want to weep. Ufomammut though some may call stoner is very far from that terrain for this reviewer. The are Heavy Droning Post Rock perfection. They make we want to pull out my GYBE and Russian Circle albums again as well. Just fantastic release really 9 plus minute tracks don't hurt the album at all either....