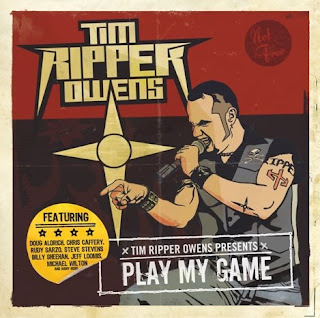 I mean good lord man can Ripper Owens Sing... On The 1st track off his debut proper solo release the man sounds like Ronnie James Dio. To this reviewer the best metal / Hard rock vocalist ever. The power in Ripper's range and the melody and emotion that can come from his pipes are just amazing you can see why Judas Priest and Iced Earth both had him come in at there times of most need. I really think Tim gets the short end of the stick a lot of the time but even with Beyond Fear which I think is his proper band anyway there seems to be something holding him back. With Play my game it's the 1st time I've heard a really bluesy hard rock sound come from Mr Owens and this is where his voice really sits at the top of its game. Yes his Falsettos and Screams are fantastic but the more mid range doom/blues voice is just jaw dropping think of a Solo Dio or him in Sabbath and this is were Ripper is home now. Lets not forget some of the major talent that helped him out Bruce Kulick (Kiss) Rudy Sarzo ( Ozzy, Whitesnake, Quiet Riot), Billy Sheenan ( Mr Big, Dave Lee Roth), Simon Wright (AC/DC) and Dave Ellefson (Megadeth) . All I can finish this off with is if all solo releases where done this well. Most vocalist wouldn't need to be in a band anymore. SPV and Ripper have a Classic in Metal in the making.... 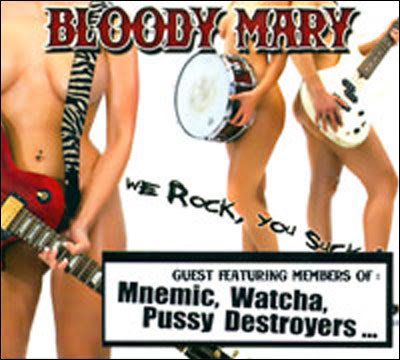 Bloody Mary- We Rock You Suck-CD (Self Released)

If you a 80's hard rock fan then this is going to kick you in the ass hard as from the moment of listening to Bloody Mary right down to the Sex Sex Sex view of the art. This ban reminds me of bands like Dirty Looks, Kix, Sea Hags, Little Caesar and Britney Fox. They are all Long haired hairy chest showing bluesy hard rockers. I hate to date my self but if Terry Date or Bob rock are still producing records here is the band to bring back hard rock to the world. The vocalist is raspy, powerful, bluesy and melodic all at the same time. I hear riffs straight of Kix , Ratt and Little Caesar on the Guitar as I said earlier. The bass and drums are 4/4 and rock steady with a bit of the funky style you got from that decade. They have a strong love of ZZ top, Stevie Ray and Aerosmith in the arrangments and style were its heavy with a strong catch factor. Bloody Mary are one hell of a ballsy rock band. Check them out. 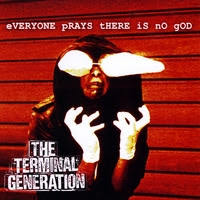 The band just sent me this to the zine asking to review it and the called me MR Eastwood and how they liked my movies. I had to at review it for this alone as it made me laugh. Well on to the reason where here. The music itself . Wow is this a twisted little cluster fuck of fun. I would call if Hardcore Industrial Metal with a Triphop flavor. If you could mix Thought Industry, Bad Brains and Manes into one project this would be very close to whats going on here. The Terminal Generation kick some major ass. The sounds are full on and blistering these are not happy men by any means. I'm sure very few of you know who the band WHEN are but if you added metal elements to them I swear its the same band. There are moments of Chemlab and Tricky going on here too. The Jazzy element mixed with Noisy and Metallic bursts. The Megaphone or very distorted vocal mixed with the back beat are just so well thought out and composed. It would make Mr Bungle or Beastie Boys proud. I'm sure they self release the material by choice not by need as labels would be down right foolish not to add this band to the roster esp labels like The End or Hydrahead.... Do you hear me people get this CD is just that goddamn good.

Arckanum-ÞÞÞÞÞÞÞÞÞÞÞ-CD (Debemur Morti Productions)
What are you expecting from Arckanum. They are what they are a thrashing raw Black metal force that hates all the christian religious things around them. This is good old Nordic Black metal with the Heathen blood of the forefather boiling over from the lies that have been given and all that has been taken from there lands in the name of a God they do not and will not support. The static tones and almost punk like approach to the razor throat vocals are very similar to bands like Khold and Horna. So you get the very clear picture this is a dirty sounding release and I don't mean is a sex or vulgar manner. Just let the blasting almost numbing drumming styletake you to brink of all sanity. I want to call it Ambient Black metal at times but it just never quite gets there. Arckanum have a icy cold melody to them at time too very similar to the lesser known german and polish black metal style. They are very talented in there own right. A band to never over look or you will be missing out on a lost art of real black metal.

This is straight up old school hardcore in the style of Sick of it all, Madball & Leeway etc. This actually sound very much like a lot of the earlier Victory bands like Bloodlet, Integrity, Earth Crisis . The shot vocals, The pounding down stroked guitars. The heavy snare/ floor tom beats that make you pogo and gorilla pit around. I've read that Jamey of Hatebreed loves this band and I can see why. The lack of guitar solos and passionate musical and vocal aggression will make you long for the days of old with the ABC No Rio/ CBGB Sunday Matinees in NYC.... I love that the songs are so short as hardcore is not suppose to have 7 minute track 2-3 minute blast of chaos, pain and destruction. Your Demise is a grand addition to a much struggling hardcore scene worldwide.

The Boy Will Drown- Fetish-CD (Earache)

Earache have pick a very difficult band to market to anyone here are there are so many styles and ideas going on here at times its becomes very disjointed I do get why the songs are so short as well as here so complexly arranged. The 3 main bands I hear in the mix are Psyopus, Dillinger Escape Plan and Opeth . Yes like a said very odd combo indeed. They at times the go for the full on Cynic or Atheist Jazz Death metal vibe and around the next corner THe Boy will drown becomes a metalcore band or they throw in a sludge southern nola doom riff. This UK band has grown up on so many styles its just becoming a jumbled mash of 7 or 8 genres. Jesus now I hear country steel lap guitar sounds. Earache I wish you the best as The Boy will drown is going to be a sink or swin kick of artist....