Skip to main content
Posted by The DoorwayTo September 07, 2020 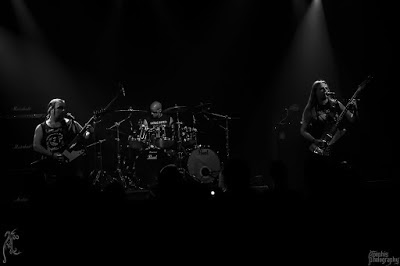 1. Listening to Æequiizoiikum there is a strong Futuristic Black Death vibe going on. What are the themes to the new record? I hear Sci fi and Voivod for sure!

Okkhulus Siirs: ‘Æquiizoiikum’ deals with an (utopian or futuristic?) age that is depicted by merciless “sameness” as opposed to individuality. It is the age of robotic followership and blind loyalty towards a status quo that can’t be questioned any longer. Most of the fear is gone, for most of the personality is gone.

2.  Extreme German bands have very Brutal low end to Death metal. You seem to have broken that mold. Why do you think that is so?

Okkhulus Siirs: I hope I don’t misunderstand you here. You mean low end as in low frequency range? As in ultra downtuned, brutal Death Metal? We actually played everything since our demo in D-standard tuning, so, only one full step lower than standard. A little lower than standard appeared just right to us at the time and it still does. I do not like bass guitars to be used as mere sub-bass providers down in the moist cellar of a Metal production. I want to hear the notes a bass guitar plays. More importantly, Khraâl Vri*ïl likes to create guitar riffs everywhere on the fretboard. 2nd fret, 16th fret, whatever – it’s got to be the right sound to express a feeling and not a blueprint construction based on genre rules.

3. The artwork of Æequiizoiikum has such a Voivod feeling to it. Do you feel that Sci Fi Death metal is the vibe the band gives off?

Okkhulus Siirs: Not sure, bands like Nocturnus and Timeghoul instantly come to my mind when someone mentions Sci-Fi Death Metal. Nocturnus somehow provide the fighting, the laser and the warp while Timeghoul represent the long travel, pursuit and solitude aspects of Sci-Fi to me. We are more Mad Max Sci-Fi then. Post-apocalyptic, dusty, clothed in rags.

4. What bands are influences to Khthoniik Cerviiks? I hear again bands like Voivod, Coroner, Demilich, Wormed and Blood Incantation for sure.

Khraâl Vri*ïl: There are so many bands which left their influence on me, maybe too many. Voivod and Coroner for sure… To be honest, I‘m not that much into Death Metal, although Morbid Angel is one of my all-time faves. I got hooked on those, as I like to call them, overpaced Thrash Metal Bands like Sadistik Exekution, Slaughter Lord or early Kreator, Messiah and Assassin, for example. My main influences in terms of guitar playing were strongly rooted in New Wave and (Post) Punk stuff by the way. And in Neil Young, especially his work with Crazy Horse!

5. You have been working with Iron Bonehead for a few albums . Why do you feel they are a good fit and are you pleased with all so far?

Okkhulus Siirs: Iron Bonehead’s work is based on worship for the music and full dedication to the ideas of the bands. Very pleased, yes.

6. If you could make a proper video for any track on Æequiizoiikum. Which would it be any why?

Khraâl Vri*ïl: It‘s hard to choose one, so I sway between „Para-Dog-Son“ and the „Délire...“ songs.

Okkhulus Siirs: I’ve honestly been thinking about this question for 20 minutes now and I got to conclude that it is impossible for me to even come up with a single idea regarding the combination of our music and any sort of real motion picture. We did some simple slideshow videos for some songs of our demo, however that’s far from professional yet all I could ever come up with.

7.  The Tech side of the band really shines with that old school Death/Thrash vibe . The guitars are really avant and the rhythm section has a very complex element going. Is it hard to keep this going for a full album?

Okkhulus Siirs: So you say the album is getting weaker towards the end? Hehe, kidding. We write song after song in the practice room by jamming on riff ideas and expanding the feeling it creates. Before we enter the studio we practice playing all songs one after another live, because we record them live as well. We must be able to keep it going physically in order to finish the recording in short time. Concerning song writing, we can manage to keep it up (hopefully) since we spend a lot of time on every single new song. Practicing and writing all that material takes up a year or even longer before we record it, thus we would be idiots if we managed to show up in the studio with loose ends.

8. How does Live and Studio differ for the band and which feels the most at home?

Okkhulus Siirs: Wearing no shoes and track pants during an 8 hour recording session in the studio definitely feels more at home than sweating one’s ass off on stage. Both scenarios are much appreciated rewards for all the weekly rehearsal “work” though.

9. Are you fans of the digital age or it's it watering down the underground scene too much?

Khraâl Vri*ïl: Communication has become much easier, that‘s the only practical use in my opinion. The threatening result of all those digital devices can be witnessed when you walk the streets of the World 3.0, therefore I‘m not a fan of this age.

10. How does the earlier album SeroLogiikal Scars (Vertex of Dementiia) differ from Æequiizoiikum to the band and how has the sound grown for the members?

Okkhulus Siirs: I would say ‘Æquiizoiikum’ has a more sparkling high end fizz to it without sounding too glassy while at the same time it has a tad more of that live feeling we pursue. That being said, I don’t deem ‘Scars’ inferior in production since both albums represent what we wanted to sound like at different points in time.

11. Is there a visual aesthetics to the band you present in artwork and on stage?

Okkhulus Siirs:  The driving force behind our artwork is a DIY aesthetic. Apart from the cover of our demo and the typewriter font we used on every record, all other pictures and sigils and bits you see there are hand drawn by Khraâl Vri*ïl. On stage we use our street clothes and proto corpsepaint to provide a stripped down image of three dudes just playing music. Personally, I’m fed up with Rock’n’Roll theater going on on club stages and therefore we agreed on keeping live shows simple.

12. If you could have any artist cover a Khthoniik Cerviiks song who would you like to try and why?

Khraâl Vri*ïl: It would be very exciting for me to hear Hüsker Dü, Current 93 or Magma doing a cover.

13. Do the members of Khthoniik Cerviiks have other projects they would like to talk about?

Khraâl Vri*ïl: My musical journey started at the beginning of the 90s, but all these bands are long gone. The only project which is still alive since the old days is Eihwaz Rising, a really personal one-man vehicle playing some kind of lo-fi psychedelic Neofolk stuff.

I put some songs from the last years on our Youtube channel ‘menstrvalmoon’, just check it out if you like… Sadly my spare time is very limited, so it‘s really hard to put something on tape besides Cerviiks, although I‘ve done lots of other bed-room-projects in the last decade. If there‘s some interest, just drop me a line.

Okkhulus Siirs: I started a little side project called Golgot with my friend zELeVthaND of Howls of Ebb last year. We’ll probably do a second demo sometime in the future.

Okkhulus Siirs: Thanks for your interest. See you in HAL my friend.