Skip to main content
Posted by The DoorwayTo November 17, 2016 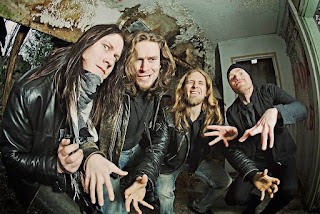 1. Tell us a bit about the mix of Opeth, Meshuggah, Nevermore and Dan Swano .. Ok this is what I hear but how did you come up with this Tech  Melodic Prog Death metal ?

2. There was 4 yrs between debut and Origin why the gap and you went from massive label Century media to a total prog metal label in Sensory. I do agree Sensory is an amazing home for this sound.

3. There must be something in Finnish waters as  some the best experimental and avant metal music comes from your nation. Why do you think this?  Amorphis, Insomnium, Children of Bodom, Dolorian, Thergothon, Skepticism, Beherit just to name a few

4. How does  " the Treachery of senses " differ from " Origin"? and where do you see the future sound of band  heading?

5.  If you could make a proper video off of one track on " Origin " which would it be and how would you want the visuals?

6. What are the band’s thoughts on Social media and how it represents extreme underground music?

7. What is the theme or story behind " Origin " as I can hear come complex themes here.

8. Will you be touring North America at all for the new album?

9. I would love to know what are the members of Oddland currently listening to?

10. If you could rework any song in the vision of  Oddland which would it be and why?

11. I getting vastly different thoughts on this but can an underground band make a living with music in 2016 or is it just a labor of love?

12.  Do the members of Oddland have other recording project please let us know so my readers can check those out.

13. Does Imagine of a band change the way people listen or interact to bands and artists.As two bands can sound similar in genre but look very different correct?

14. What is the difference of Oddland Live verses in the studio?

15. Thank you for your time any closing thoughts here