Skip to main content
Posted by The DoorwayTo December 08, 2014

I don't usually have mixed emotions on an album but I feel that there are too many cooks here to make it a great release. There are indeed great ideas . These youngsters like to mix Prog Metal with Modern Death metal and Swedish Deathcore sound into something that is complex at time but comes across as thin, confused and very nu metal at times. I really wish that Letallis would stick with the Prog / Power metal side of the music as that is what is really working . The Death metal just seems to come across as forced. The vocals are really to Hardcore in that At the Gates style to work for a band like this.  I can full on hear the talent they have just really need to focus on song structures and not just want to sound like someone else already out there.

This project is a 22 yr work in progress written in the 90's recorded between  2002 to 2013 and not released to the world and let me tell you this is worth the 22 yrs . It mixes many of the styles and sounds of many bands I love into something all its own. Virus, Ved Buen Ende, Fleurety,Devil Doll, Solefald, Oxiplegatz and And Oceans all come to mind listening to this . This album by Manimalism is  special to say the least. This is Avant Post Black metal with all those jazz and experimental touches that make it very out in left field most of the time but for those of use into those bands and sounds there is nothing better. I would swear, Misanthropy, Season of Mist, Candlelight or Code666 release this mastery of modern music. The clean almost theatrical vocals work so well with the over the top dissident tones going on here. So glad got the time to understand this album and look forward to more . 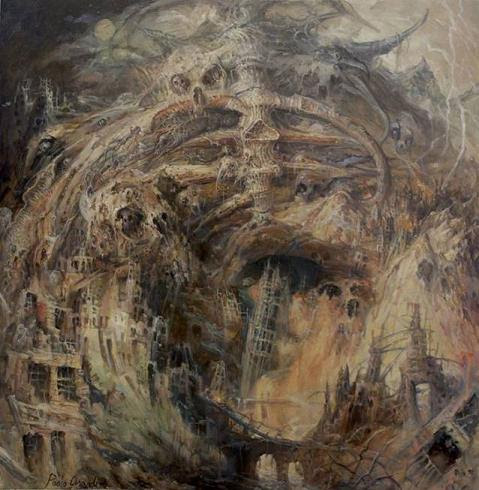 You know when you get that moment those chills when you hear a new metal band that you know have spent years honing their chops and refining the musical riffage and the talent level is just there and let's be honest it has Chris Amott of Arch Enemy in the band.. Well that is what Armageddon is and more the mix of Melodic Death metal, Gothic Doom and symphonic black metal all into something that is familar but all its own as well what I hear most is bands like Hypocrisy meets with bands like Dismal Euphony, Entombed and Dark Tranquility. There are some amazing Edge of Sanity and Amorphis moments going at well. The guitar solos and runs as so catchy its amazing. The vocals go from the guttural gothic doom style to full on Power metal sung ones. The Synths add that Sci fi/ Tech Death metal vibe as well. There are so many things going on here.  Armageddon love the classic metal sound a lot as well just everything is always over washed with that Black/ Death tone. This album simply kicks ass and is on the perfect label as they have that futurist sound that many on Listenable have..

I should not be into this album because of all the nu metal elements and groove elements but Cold Snap mix 3 bands into there sound that makes me what to come back to them more and more .  Roots period Sepultura, Disturbed and Prong with the power and furry of bands like Manson, Rammstein and Skindred. I love the very tribal meets electronica meets industrial metal side of this bands.  " The Monster" is a crushing track and shows how amazing this band can be . There are mellow and bombastic moments though out the release as well.  Cold Snap have a very ethereal haunting back drop to the groove and back beats as well. They come from where bands wanted to mix new sound, indie, metal and ethnic elements all into one band and with this cold snap are one of the few that have done it with some great success.  I know some will dislike this with a passion and fury but give the album a listen and many of you will say yes there are Slipknot moments but there is so much more going on here.

Hey it's old softy Clint loving the Metallic Hardcore again this time this force is from chicaog but you could say they are from So Cal , Boston or NYC as this sound is just something that makes you want to circle pit and thrash about . This sound was called Crossover music in the 80/90's  . If you like more then half the bands on labels like Southern Lord, Translation Loss, Hydra Head or Exile on Mainstream then my friends you need to run and get this . Hardcore/Punk anthems for 2014 is what we have going on here with enough melodic and southern groove to add that brilliant Sludge/crust vibe to it all. Every time I hear an album like this I could care less how original it is if it make me move and create a fire for creative outlets in my day its a major fucking win. American Heritage is the band Amrep would have signed today if they were around still doing that stuff and that is high goddamn praise .. Grow a pair and get this as this is big boy pants music with some really amazing moments...