Skip to main content
Posted by The DoorwayTo March 06, 2012 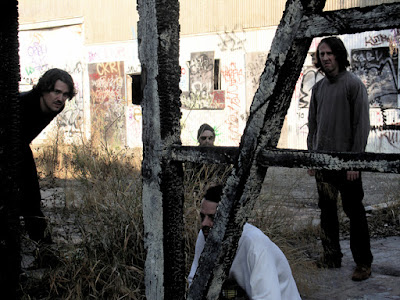 Interview with Nolan Cook, co-founder and guitarist of Dimesland.


1. For those who are brand new to Dimesland, tell us about the band and how it came to be.

We are an abstract metal band operating out of Oakland, CA.  The group was co-founded by the other guitarist, Drew Cook and myself.  He and I have been playing and writing music together for much of our lives and Dimesland is our heaviest incarnation yet.

2. From listening to Creepmoon several times what I hear the most is a mix of Voivod and Killing Joke with moments of Mike Patton inspired chaos thrown in for good measure . Do you consider Dimesland a Metal band or more a Heavy Experimental Noise rock band?

This is certainly a metal band- of sorts. And while we are fans of both Voivod and Killing Joke, I’m not sure that we pull any influence from their material. If anything it would be from their spirit of adventure.

3. How did you hook up with Vendlus, an amazing label that supports many left field bands?

Our drummer Harland struck up a conversation with them inside the computer, and once we had posted a couple of rough mixes from Creepmoon he directed Vendlus to their location. When Vendlus heard the tunes they asked us to take ourselves off the market.

4. Being from Oakland CA you have so many bands in and around San Francisco that fit this fractured sound: Weakling, Neurosis, Slough Feg, Amber Asylum, Giant Squid, etc. Do you feel its just the area or is there something in the water even with labels like Neurot, Kool Arrow, Revolver etc?

Well, while there is a lot of creativity in the bay area that is not to say that there isn’t the same in many other areas of the country.

5. Does Dimesland prefer the stage or the studio for the music you create or are both good and different in their own ways?

We enjoy both realms and they quite different from one another. The studio is where you can really focus on detail and creativity and the stage is more about immediacy and raw energy.

6. Is there a running theme on Creepmoon?

Do you mean lyrically? If so, the running theme would revolve around characters who have psychologically sunk below sea level for any number of reasons. That is a fascinating subject to me.

7. Why an EP and not a full album? Will we see a full-length album soon?

Creepmoon is a self-financed, self-produced recording, and as such we could only afford studio time for a shorter product. There will indeed be a full-length release. We are nearly finished writing it and have begun to demo it out. We hope to begin recording it later this year.

8. What are Dimesland’s thoughts on the indie underground music scene in 2012? Has it lost its way with the digital/social media ideal or is this the new tape trading for the 21st century?

Communications technology cannot be contained so the music world (and the rest of the world) must adapt to it. The upside is that good music that might have otherwise gone unheard is now available to anyone with a computer. The downside would be that there are simply too many bands- a vast, often putrid ocean of bad music.

9. I see there is a video for Ghastly Maneuvering. How did that come about and will we see more videos? Are you happy with outcome?

The video came about through association with my ridiculously talented friend, Mr. Tawd b. Dorenfeld of Los Angeles. Originally I was asked to provide a blurb for the release of his film, The Anna Cabrini Chronicles, and after that we started talking on the phone now and then. He and I had collaborated on a few small projects prior to my asking him if he’d be interested in creating something for Dimesland.
And yes, I imagine that we will come up with another video in connection with our next release.

10. Where do you see the sound of the band going with the next release?

We have a lot of great new material on the way that continues to push at the boundaries of what we call metal. We’re very excited about it.

11. Thanks for the time any closing thoughts here..

Thank you for listening and for your interest in general. Stay tuned for more from Dimesland.