Skip to main content
Posted by The DoorwayTo August 30, 2016

Sun of Gaia Interview is up ... 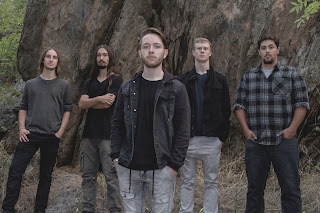 
1 You're a rather new band to my reader tell us a bit out Sun of Gaia came to be?

Sun of Gaia first came into existence in mid 2014 after our original guitarist Jakob and vocalist Lachlan were looking to incorporate their combined musical ideas into a full band context. When the rest of the members came in there was a very fluid vibe during rehearsals and everything that Sun of Gaia is today stemmed from those beginnings.

2. I hear elements of bands like  Septic Flesh, At the Gates, Meshuggah and Dark Tranquility I even hear some Doom metal going on like Novembers Doom and Paradise lost . Were did this Prog meet Tech Death metal sound arise?

We all have very different tastes when it comes to metal and its subgenres and look to combine all of these in the songwriting process, which is probably where listeners will hear some of those different influences start to shine. Another noteworthy aspect of our songwriting is that each of us tend to write full songs which reflect our musical inspirations, and these are then brought to the rest of the band where we will compromise and make the song sound our own.

3. Sun of Gaia are from Australia I bands I've really enjoyed from there are Disembowelment, Halo, Alchemist, Mournful Congregation, Gospel of Horns etc very diverse sounds. With one common ideal each band always experiments with the styles. Sun of Gaia seem to do the same is that the Down under way?

For sure. There is such a significant degree of experimentation and diversity in Australia's music scene. From progressive metal giants Ne Obliviscaris, Karnivool and Caligula's Horse to melodic death metal masters Be'Lakor and Orpheus Omega to Grindcore/thrash fanatics King Parrot to the youthfully popular Parkway Drive, Northlane and Make Them Suffer of the hardcore scene, there's really something for everyone in Australia. I suppose it's because unlike much of Europe, Australia never went through a founding metal trend, so the metal that's coming out of Australia now is really just a huge blend of influences from around the world.

4. What is the theme or story behind your album Corrode?

'Corrode' is based on the corrosion of certain aspects of life, as well as emotions and the human condition. A central theme is acknowledging the frailty of life and how specific circumstances come to drive humans to the point of this realization.

5. Just wondering did you want to release the album DIY always or do you want to try and find a label it seems today with good PR and Social media bands can get some major exposure in 2016?

We've asked ourselves this question a number of times but I think we'd really like to get onto a recognized label, with good terms, as soon as we can. We've got a heap of new ideas that we'd like to use the connections of a record label to promote, and we'd love to play shows outside our hometown to new faces.

6. If your could make a video for any track on Corrode which would it be any why?

We've made a number of playthrough videos for some songs on Corrode, but I think if we were to make a full music video for any of the songs, it would have to be for either The Cold as it is a hard-hitting fan favorite, or Blinding Light as it's the song of which we're the most proud on the EP musically, conceptually and lyrically.

7. In  just 4 words describe the bands sound to someone that never heard you before?

8. To come back to question 5 a bit are you fans of the digital age ( Social Media, You Tube, Digital albums) or does it really water down the scene as any bedroom artist can create music and give it to the world?

You definitely have to use the best of both worlds. A emerging band these days can't expect to connect with the scene if they are not using social media and vice versa.

9. Were do you see extreme music heading in 2016? I see it being much more tribal and personal ..

Extreme music is most definitely taking on a more personal and enlightened approach. It's really tearing down boundaries and exploring humanism more rather than maintaining the status quo. When you look at the most recent offerings of Fallujah, Black Crown Initiate, Be'lakor and Job For a Cowboy, this becomes increasingly evident.

10. Always interested and so are my readers whats on Sun of Gaia playlists anything new or local that could be a gem to my readers?

We played with Be'lakor recently, so we've had them on our playlists quite a lot. Ne Obliviscaris is a band that's always on our radar, and you can regularly find 'Portal of I' spinning in the CD player of Rory or Nathan's car. Plini and Animals As Leaders are two instrumental bands we're quite fond of, and of course, we've been jamming the new Meshuggah song regularly. Gojira are always a constant favourite. For local Adelaide bands, the boys in Dyssidia and Voros always deliver, and Freedom of Fear, Truth Corroded, Sonn'ender and Asylum Butchery also rank up there.

11.Will Sun of Gaia be doing any touring outside or shows outside of Australia?

We don't have any interstate or international shows planned just yet, but stay tuned!

12. Do the members of Sun of Gaia have other musical projects you would like to let my readers know about?

13.Just wondering in your area what are live show like here in the USA they are very hit or miss now . Do you draw good crowds is there a real bonded scene down there?

The scene down here is relatively bonded, so if you can attract a few people then they often bring their friends out, but in Adelaide it's all about just knowing the right people and putting in the effort in organising and promoting shows that will yield the best outcome.