Skip to main content
Posted by The DoorwayTo June 09, 2016 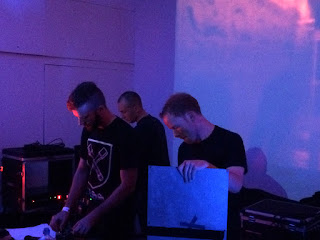 1. I was born in NJ and got out as fast as I could. Where is a P.E. band
of such nightmares come out of NJ?

The members Concrete Mascara is based in South Jersey, about 15-20 minutes from Philadelphia.

2. Concrete Mascara reminds me of those bands like Slogun, Brighter
Death Now, Sutcliffe Jugend and Atrax Morgue . What were the projects
that got you to sound like you did?

In terms of industrial music, my original inspiration came from Grunt, Haus Arafna's first album, IRM, and Prurient. A lot of the music that's informed CM's sound is way outside of the industrial spectrum though. Artists/projects like Autechre, Regis, Converter, Armageddon Project, and Skinny Puppy have been just as important to CM's development.

3. Power electronics and Noise in general is a very fringe art what are
you looking for at the end of the day making these sounds. Is it just a
releases or does it go deeper?

Lyrically and thematically CM is very close to the heart, pulling from my own experiences and concerns. I'd like to think that the best CM releases go beyond being just another power electronics/industrial release, but I guess that's in the mind of the beholder.

4. Your working with Malignant Records how did you connect with the
legendary Industrial/ Noise label in North America?

I've been buying records from Malignant for many years and Jason has been distributing CM releases for about as many. If memory serves, Jason and I started after Sewer Goddess passed along the "Pursuit of Hedonism …" tape to Malignant HQ. After the "Blossoms of Shame" CD came out, suggested that talk in the future about a potential CM release and things progressed from there. Jason has been very supportive and enthusiastic about everything so I couldn't ask for much more!

5.  Whats you thought on Social media and digital age . Is it helping or
flooding the world of 2nd rate bands and project . It seems as bedroom
artist can have their 15 minutes these days...  Is this the best
exposure for underground music in 2016?

In general I am not a big fan of social media. Speaking for myself, it has at times become a compulsive way for me put ignore my own life. I think when people become so attached to their phone and live such distracted lives, rather than being present in the moment it's very negative for all parties involved.
In terms of music, I think its mixed bag. Sometimes it seems to me a good thing that people can so easily organize shows or events via social media, but then it also presents problems where if you're not "in the know" online, you miss a lot of good shit happening since the physical community or shared physical experience is so fragmented. Bandcamp and SoundCloud are decent platforms to put your music out there for those who care to listen, but I still think contacting labels, other artists and listeners directly is the best way to spread the word and get people interested. Things like net labels and all that where no one ever meets face to face and your music just becomes another file on the net do not seem like particularly healthy trends.
Maybe the biggest problem with social media and internet music is that there's such a constant barrage of information and music vying for your time, it really erodes the need for listeners to absorb a release or even wait to listen to or buy a release. Everything is so rapid fire there's no time for reflection…

6. What are Concrete Mascara listening to and reading currently let my
readers know some new directions for them to explore.

I can't speak for the other members of CM, but currently, as in the past few weeks I've been listening to a lot of Violet Poison, especially the new 12" "All Are Welcome in the House of Lust", and the incredible Black Tears album he did with Giorgio Gigli. I've got pretty much his full discography of everything after Zooloft era and I pretty much love it all. The re-issues of the Polar Inertia 12"s have been getting a lot of time on the turntable as well. I've also been spinning all of High-Functioning Flesh's weird discography.
In terms of reading, I have been slowly making my way through the Book of the Long Sun series by Gene Wolfe. It's taking me a ridiculously long time to get through them, which is unusual, but mostly due to the fact I've got very little free time anymore.

7. What is a live show for Concrete Mascara like how does it differ from
recordings?

Currently the CM live show is a bit more precise and electronic oriented than our recordings, oddly enough. This is largely because we've been playing out of PA systems rather than amps, so getting the feedback the way I like it doesn't normally work. When it's possible we perform as a three piece, utilizing a lot more dual vocals and multiple layers of synths to keep things dense, but moving seamlessly from one track to the next. We try to get the live sound to be pretty similar to the recorded tracks, but there's always room for variation.

8. If you could collab with any artist and make music who would it be
any why?

Either Justin Broadrick because he's released great music in some many different genres that align with my interests and he's done some of the best remixes, of all sorts of tracks, I've ever heard; or Converter, because at his best Converter fucking destroys and I think the marriage of his rhythmic noise with my raw power electronics background could get some really good results.

9. Why do you think so many black metal fans are into Noise and P.E. . I
feel there is a similar darkness and tone to the music. Or would say
it's something else?

Well I don't know that most people who are into black metal are into noise, but I think it's common that people who like noise also like black metal. I guess it's not surprising if you enjoy the most unpleasant noise, you're probably going to also enjoy less "extreme" genres like black metal. And I guess a lot of people, at least in the US get into noise through metal, or maybe that's how it used to be?
The more difficult question is what is black metal now? What is noise or power electronics? I think all of these "genres" have been so diluted that maybe those terms mean something less now to the average listener/reader?

10. Do the members of Concrete Mascara create music or sounds in other
projects?

Andrew does IDM/ambient/experimental music under the name Agidion. Jack is recording minimal synth/techno-ish stuff under the name Stella now I believe, and previously used to do music as Male. I've done some side-project type material but I don't know that it will get released.

11. If you could make a long form video for any of your music over the
history of the band what would it look like and what tone of the theme
be like.

A video for the track "Scanner" from "The Pursuit of Hedonism…" tape would be my choice. Something between "Second Bad Vilbel" and "Gantz Graf", all glitched out, hyper fast cuts, between long shots of drug abuse, street violence, police brutality, from the eye of CCTV cameras (with an Escape from New York meets Nil By Mouth vibe). Something like that, even if it does sound a bit cliché…

12. Does image play a role in underground noise music or is it more
about the harsh soundscapes in 2016.

Image always plays a role if you're trying to sell something right? Ideally the actual sounds of a record are the most important, but if the image is shit then who's going to take the time to listen when there are so many other options?

13. Do you think this style of music could ever hit a larger audience or
would it even be worth it in the end.

I think probably not.

14. Thank you for the time any closing thoughts here

Thank you for the interest!