Skip to main content
Posted by The DoorwayTo February 13, 2016 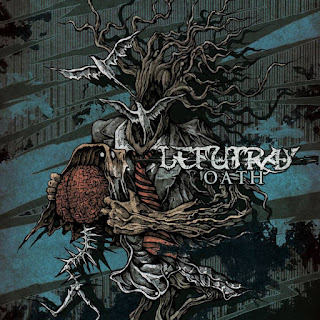 This comes straight out of the late 90's early 00's  Extreme Thrash/ Death Movement. They have so much in common with bands like  Sepultura, At the gates, Machine Head and Testament. Just to name a few. There is a melodic and fierce attack all at the same time going on for this band. I don't know many bands from Chile but if this is how metal comes from this nation then I need to hear more asap. The guitars are razor sharp on the attack the rhythm section is heavy and full  which takes me to the vocals that are raspy, nasty and full on warlike through out the 1st few  tracks of the album. The more I listen to Lefutray the more I can see how special of a project this is. There are some heavy heavy thrash grooves and breakdowns going on from time to time that will make a pit form in seconds. From reading a bit I see this is the third album by the band and said to be the more extreme side well if so continue gentle men this work very very well.

So Lustre's man force created a solo album of cold raw , dark and primitive Black metal that sounds like the early stuff out of  Norway, Germany and Poland. You know  Mayhem , Darkthrone, Graveland and Behemoth material. The vocals are so much in pain it sound like he his choking on his own blood from ripping his vocal chords apart from singing this way. We have the lofi droning very treble inspired guitar and the polka drumming we all remember. This could very well be a demo recording that was given to Deathlike silence to release that's how close to the system of music sound tradional terrifying Black metal. Keep is grim and keep it noisy the Dark one's still have some bands keeping the candle's lite for the old way ...

We all know at time Occult Black metal term gets thrown around a bit too much but with Titaan a genre and title could not be more well spoken. Titaan are about ancient Mesopotamic culture and as I listen you can hear elements of bands like like  Absu, Marduk, Disenbowlment, Incantation , Cult of Fire and  Negative Plane . I know you see where this is heading and how twisted sounding a release this is. It mixes  Doom, Noise, Industrial, Black metal and Occult themes into something that will make the skin crawl for most that listen to it. Welcome to the end of days as these are the chants and hymns you will hear as the world goes black into the luscious flames of the abyss.

There are times were prog rock is just a magical and mystical journey for your mind , soul and well being . I will say bands like  Anathema, Porcupine Tree, Yes, Antimatter and Unicorn all come to mind and now we can add The Mute Gods. There clearly are many others out there I just want you to see names that are very similar to The Mute Gods. As they play a verision of pure 70's / 80's Prog Rock that mixes with nothing they don't add metallic element or hard rock or even the arena rock elements many do. It's truly complex, melodic prog music that not even one is going to like and many will think it's just ego's at work trying to over think music and make it more theatrical then needed and my friends they are very very wrong.  I can not be more proud to review an album of this much stunning talent, arrangement and skill. Some times albums are just beautiful visions of an artist that knows where they belong. Please welcome The Mute Gods to that place..

The Dane's are not the ones that are usual to the Viking metal realm. They are much more Death and Black metal clans with touches of Doom through out. Well Vanir is very much a mix of  Death and Viking metal. Almost in a warlike overcoming of sounds and visions. Vanir are a pissed off group that like the guttural death vocals style with heavy synths and symphonic elements. They more remind me of bands like Bal Sagoth and Gehenna ( Sweden) in they way they approach the music they make. So I add this Melodic Blackened Viking Death metal  ( Is that even possible well it is now !!!) They do at time very much remind me of Thyrfing too. There is a folksy catchy movement that does flow through out the album too. Vanir I'm so pleased Mighty music sent me this to review. I miss the Asatru element in music more and more these days as we move into so many Post metal and Tech metal sounds in 2016. Keep the All Father close as this is the only way one will be able to remember there heritage.

Bands are becoming a collaboration on so many style and sounds these day wanted to break boundaries and ideals so often they seem to all want to be Post something as its just a reworking of the old with a new spin. Well folks The Wakedead Gathering are on of those and you know what. They are really fucking good too. Are you fan of bands like  Fleurety, Esoteric, D.H.G, Code , Lychgate and Ved Buen Ende. Then Damnit you will have one hell of a listening experience ahead of you. This album mixed Doom, Blackmetal, Jazz, Industrial and Avant elements into something that could be called Dark Metal as Bethlehem and Shining have taken this path too . There is just so many exciting sounds going on with  The Wakedead Gathering . It's one of those albums you need to check out for yourself to fully get the picture..

Futuristic  Post  Black Death is really what I hear from this extraordinary band.  A future world at war with it's very self and those on the planet just struggle day to day to survive. I hear bands like  Voivod, Oxiplegatz , Deathspell Omega and Aosoth through out the album. There is a chilling  vibe going on here are well as I think the band at times is really seeing their own death as they happen.  Ecferus is so much more than unsettling but that is a very good place to begin the sounds and vision that I see when listening to this album. Madness and Hysteria are other feelings that come from the vocals and music being presented to the listener. Droning Chaos is another direction I would head with Ecferus. All this should make you want to run and get this album.. I know I will be listening to it several more times as well..