Skip to main content
Posted by The DoorwayTo June 24, 2015

Rosetta interview is up .... 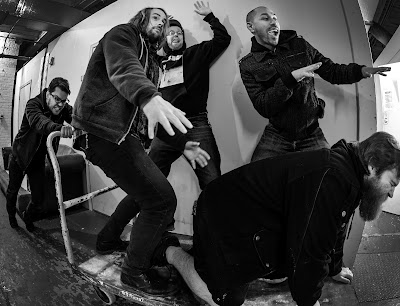 1.  This is the 2nd  self released album after long term with Translation loss. Wondering what made you move from a strong backed label to taking the full on DIY ideal?

When we looked at where the music industry was heading, it was just the option that made the most sense. Why sign with a larger label, with more red tape, when the whole large-label model is sinking? It just wasn't appealing anymore, and we were curious to find out if a fan-supported model could work. Turns out, it can.

2. With Rosetta I hear a lot of Post Rock, Post Metal and Hardcore elements. There is a strong love bands like Isis, Neurosis, Mogwai, Russian Circles and even Pelican in the  tones and  arrangements. Where do you see the band heading musically?

I think we started out in really spacey territory, then gradually began to emphasize more hardcore elements. Now it seems like there's some 90s rock and Britpop influence layered in along with the preexisting sonic palette. We're just trying to expand with each subsequent release, to capture a broader range of emotions in what we do. Besides which, it's fun to try new techniques. Now that we've added another member (Eric Jernigan of City of Ships) on guitar and vocals, that's another creative element that pushes us in new directions.

3. With the new album is there a running theme behind it?

It deals with the alienation brought on by technology. We were talking a lot about this idea that technology promises utopia but costs us humanity. Digital interconnectedness is an amazing thing, but we also are a society worn thin by distractions, advertising, and pointless information noise. So we worked a lot with that ambivalence, which is where I think the album's moodiness comes from. But overall, it still has a really hopeful tone to it, which I think is a result of this tacit belief that we aren't too far gone to reclaim some of our basic humanity.

4. If there was one song you could cover what would it be and why?

For me personally, I'd cover "Women Who Love Men Who Love Drugs" by Oceansize. I love the vibe of that song. It's a huge lazy rock song with lots of self-indulgent guitar parts, yet it has this really insistently pensive mood. Kinda uses the texture of post-rock without the annoying pretense.

5. What song off Quintessential Ephemera would be best made into a proper video and why?

We're actually working on a video for (Untitled V) because it seemed like it most lent itself to very weird imagery. It's got lots of noise and dissonance while still having maybe the catchiest hook on the album ("made out of nothing"). There were a lot of possibilities in there.

6. In the studio do you like a more live feeling for release or do you like to have  core music and then overdub and layer to make it as massive as possible?

Instead of putting a 'glaze' of overdubs on the whole record, we usually confine ourselves to one or two studio pieces where we really experiment. But the main body of music is typically presented much as it would sound in a live context. We often have difficulty capturing the overwhelming feeling of the live sound on recordings... sometimes it requires a good bit of tweaking to get the tracks to sound more like they would if you were in the room with us.

7. What are the member currently reading and listening to?

I can only speak for myself here -- "Man Is Not Alone" by Abraham Heschel and "The Empathy Exams" by Leslie Jamison for books, and I've been listening to the new Decapitated and Jakob records a lot lately. Boards of Canada's "Tomorrow's Harvest" has been getting a lot of play too.

8. If you could ever sign to a major label for big payday, strong touring and push to a differant level would you every do so?

I doubt it. The payday is never what they promise, and I think that model is a recipe for burnout. It's extremely rare for someone to do music inside that model and make a holistic life out of it. The relationship sacrifices are invisible to the public. The priority for us is sustainability above just about everything else. Money isn't an end, it's a means to the end of being able to make music for life.

9. Do the members of Rosetta currently have side projects or other music adventures you would like to tell us about?

Eric is in City of Ships, whom we've toured with extensively. Their record "Ultraluminal" is ridiculously good and just came out a couple months ago, and they just got back from a long tour of Europe. Armine does solo work on the side, and I've recently gotten into doing scores for film and video games. Basically, anything to make music more of the time.

10. Does or Should Religion or politics ever play a role in music?

If that's what the artist has to express, sure. I don't think you can say that politics or religion are ever inherently either a plus or a minus for the quality of a record. Whether something is good or bad shouldn't be a function of whether you agree with it, but of whether the artist communicated his or her point in a new a meaningful way. Musicians need to make the music that is in them to make. If that includes talking about politics or God, then so be it.

11. Your website is impressive do you feel a good website in conjunction with strong PR and Social media is all a band needs today? Labels do seem to be just a middle man today at times?

To some extent, labels still function as gatekeepers. They have relationships that allow smaller artists to ride the higher profile of larger artists on the same label to get exposure. I doubt it will remain that way in the future, but for the moment, labels still have a lot of power. It's definitely not enough just to have a slick website and lots of social media accounts -- to fill the gap left by not having access to a label's business network, you have to work that much harder at building relationships with listeners. We definitely don't take people's attention for granted. Having strong internet presences is just a good tool to be able to connect with people more directly.

12. Your artwork for every release are  always impressive and thought provoking. Do you feel visual in underground music can play a major role in over feelings and ideals of bands as much as the music?

It ought to, but it does seem sometimes like people aren't open to being challenged by the visuals. We've angered a few of our fans on more than one occasion by putting out a cover that doesn't look like "what a post-metal album ought to look like" -- which is weird, because our fans are people who often pride themselves on being interested in challenging music. So why not have the visuals be just as challenging? But I think that too often, the art functions as basically a category sticker to establish listener expectations. I think it should be more than that. Artwork, just as much as the music it contains, should be allowed to make people uncomfortable, make them ask questions.

13. Your from Phillie what is the scene like that in 2015 I know there are a few labels and bands there lol?

It's super pop-punk these days. When we were just getting started there was much more of an angry hardcore and metal vibe about the city, but it's cleaned up and gotten a lot nicer. So lots of the Philly bands getting buzz have a more positive sound these days. But we have some amazing venues now and it's just a really nice place to be able to see accessible, affordable live music, regardless of style.