Skip to main content
Posted by The DoorwayTo June 20, 2015 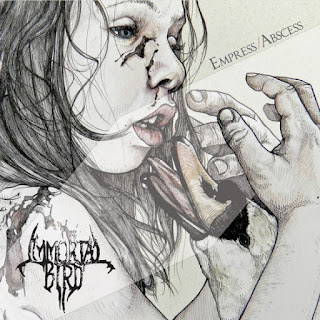 So we are back this the  2nd  release of this  Grind, Doom, Death Noise Rock force. This time they are self releasing the  CD and  digital side on their own label and the Vinyl will come from Broken Limbs.  So Rae this time did the vocals and not drumming on the able that was done by Novembers Doom Drummer Gary... The biggest difference between this and the 1st mini album. Is there are many more styles and harmonies coming through this album as well the vocals are music more a mix of extreme and haunting . There are some nightmarish vocals and bombastic riffs happening with a wall of percussive might. I was impressed with the 1st release enough to set up interview and with  Empress/ Abscess they have moved to the next level of recording, song writing and creativity. I know people say they hear black metal in the music but I do not the Grind, Doom and Death metal are there.  There is a sorrow to the album that mixed with the complexity that is such so much more then I hoped for. This is very much a mix of bands like  Made out of babies and Crisis in the way I hear whats going on Immortal Bird come very much form the  Hardcore/ Crust side and add the metal in just to kick you ass. WE NEED MORE AND SOON!!!!

Damn the intro was very industrial and the 1st track kicks in and I feel like the second coming on Dismember and Entombed just came from my speakers. Dirty punk inspired Death metal of the highest orders !!!. That very war like bass lines that sound like tanks and army trucks coming in to lay waste to the land. The vocals are very much that throaty death scream and the guitars are that  cold and distant melodic that sounds like an empire of guitars coming in for that same assault. The groove is here and the pits will just come as this kind of music moves any one into extreme music. This is epic death metal no other way to say it. I fucking love Wombbath and you if you a death metal fan need to hear this ASAP. There is a Doomy element to it as well but it never takes away from the Death metal in the same way Incantation and Bolt thrower do it. This is making me relive the mid 90's Death metal heydays. 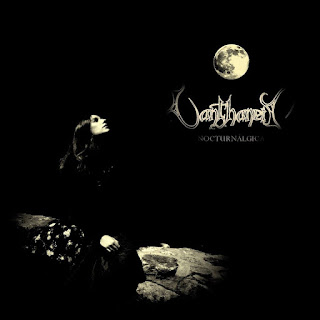 Remember is the years back when there was truly female fronted Gothic Doom metal  bands like  Within Temptation, 3rd and the Mortal, Tristania,  Theatre of Tragedy and The Gathering this is where Lanthanein are firmly rooted. This is orchestral, dark, beautiful, Symphonic and huge in sound and scope. There is a very large neoclassical element to this as well. They are an Female fronted force from South America  form the lovely lands of Argentina.. The production is  2nd to none on this . The soprano vocals are breathe taking to say the least. I will use the phrase " Metallic Majestic " as for how to describe what I'm hearing. The male vocals are growls or  choir like set in the background more but they work in the interplay so wonderfully. This album is just wow...

So this is  female fronted as well but this is very much a Prog inspired Goth rock band with Noisy alt rock elements. if you could put bands like  Slowdive, Lush, The Gathering and many of the Projekt records artist into one group you would have something very similar to  The HILLNOISE. The Prog rock and adventurous riffage of this band is really where they shine. Honestly the weakest part of this unit are the female vocals which at time seem to fragile and out of place at time. The vocals are over the top at time. She really shines when its very simple and not so rocked out. I think they feel in love with a band called Madder Mortem and really want to go that direction but their vocalist is much much stronger in range and skill. Not to say its a bad record. She just need to find her place in the band as there are times where the vocals are really good.
I will want to hear were this band goes next.

So are many of you know this band blew me away with several releases on Translation Loss label they have now moved on to release their own music and expand there own destiny. With Rosetta you get the stunning mix of  Post Rock, Post Hardcore, Post Metal, Indie overtone and a love of jazz . I think there is a theme going on here. The territories that bands like  Neurosis, Isis, Pelican and Russian Circles have traveled is where Rosetta are breaking new boundaries every release. I love to use the term " Thinking man's music" and this is very much the case we have here. You will never hear everything in 3 or 4 listens to an album like this. There are so many subtle changes in pitch, tone, emotion and over all sounds. The vocals are are a singular outlet of pain, hope, sadness and pleasure all at the same time . From Enormous to Delicate all in the same track is where Rosetta takes you. The chills and IT factor is really here for a band that could be the saviours of the indie rock world. This is ready for arena's but also personal enough for a small club . Rosetta makes the hair's on the back of my neck stand up . Long live Rosetta!!!

The Drifting and Spacial intro to the album is loring me into something I'm just waiting for it. This band is going to be massive in sound I can just tell it . The Droning Doom elements are now starting to shine from Orok. This band is from Portugal and loving Moonspell  Ava Inferi and Before the rain. I'm holding high hopes for this. The hypnotic side of the band has already won me over. Black noise , Doom and Orchestral elements well Orok where can you go wrong with that and with "Ubermensch" that would be no where.. We do have a very challenging album to listen to there is nothing simple about it. This is not going to be a place to start listening to extreme music but were you go when you think there is nothing new out there. Its a mix of Doom, Black metal, Drift, Noise, Dark Ambience and Post Metal all mixed into something that takes you to that next level of thought or makes you rethink all you heard before and what can and can not actually be musical. We need artist like this bending and shape shifting sound. Great work.