Skip to main content
Posted by The DoorwayTo January 18, 2014

Well well more Crusty Grind with a healthy dose of extreme thrash from the 90's thrown in just for good measure. If Kreater and Assuck had a love child it would be Alehammer.  They love the feedback and punk side of the music realm as well. These are all 2-3 minute blasts of power , fury and torment. What the hell more can you really ask in extreme music. They remind me alot of what Southern lord is doing with getting the Crust Grind movement flowing again. If you liek those Slap a ham, Old Earache and Sound-pollution etc. I could listen to Alehammer for hours ad just smile this is reminding me of when bands did DIY house and basement shows everything was copy copies fanzines and homemade Demos and Patches. I really miss those days. Thank you from bringing it all back.


Black metal from the  mighty Czech Republic and you know what you get from there isa rich history of  occult and ritualistic madness in the way it is presented Bands like Root and Master Hammer come form there so you know the experimental edge is going to come out . With Cult of Fire what I hear most is a mix  of  Jazz, Oriental, Ambient and Post Black metal in the way bands on labels like  Moribund, Code666 and DMP are all coming from. There is a darkness that you just don't get from many bands like Cult of Fire . The spacial elements and waves of reverb mixed into the full picture just bands you been that this band has traveled the dimenisional vortex and come back changed some how. Cult of fire have that very dirty punk/thrash element going on as well with everything mixed. I get the same feeling I 1st heard  Limbonic art, Inquisition or Emperor. There is something very impressive about this band and we need more to come.. 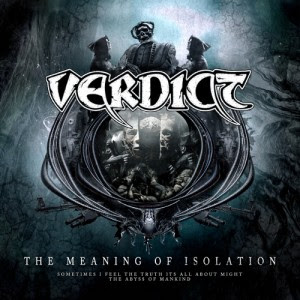 Verdict- The Meaning of Isolation- CD/ Digital ( Self Released)

So what does this German force create is is a wall of  Power metal infused Thrash with a heavy dose of Gothenburg  Melodic Death metal overtone. What is really setting them apart is the Prog elements that they are incorporating into the tech metal structures of the songs. I have a total love of Sodom and Celtic Frost and Coroner in the way Verdict writes and arranges. Then out of no where comes that Obituary and  Pestilence elements of the old 90's death metal world mix with all modern sounds as we have talked about all along. Verdict is a great band or song writers making some of the best crossover Death metal in 2014... Check them out you will not be disappointed .. Come Dan Swano worked on this album to make it sound as sweet as it does..

I see we have a Death metal orgy of reviews this time out with a huge love of Deicide and Slayer intwined into something I was not ready to really like and as the album goes along its dragging me in deeper and deeper. The solo are total 90's thrash on the extreme and heavy thrash side the vocals and drumming are that of same period death metal. But this band wasnt  even around back then. There are so some many new bands paying homage in their own way to make this music fresh and interesting again and Roarback is one of them. This album cover even reminds me of something that would have come from Combat records back in the day...

Black doom in the highest of orders is what we have here. Lvcifyre is terrifying in presentation, creation and over all soundcapses . I would put this in league with bands like  PHOBOS, Bethlehem and  Nightbringer... There is a full on suicide quality about what is going on here. This about is what the word CHAOS is all about. We have a sickness coming from this band that will not go away and will continue to fester and grow until you have become what they want and will use your essence in the conquest of the human race. Svn Eater is one of the noisey black metal releases I've heard in years and its so much more then Black metal that is just the very core of the band. Somewhere there are angel's dying violently while this album plays on my speakers..

So we have another mind blowning Post Black metal Avant musical journey that will just leave you feeling there is hope in the underground music scene to be all you hoped it could be.  You know what your getting here elements of Prog, Jazz, Black, Doom and Melodic Cold Death metal in the way Satyricon, Code, Mayhem, Emperor, Arcturus and Borknagar took it and  Virus, Shining , Ulver and DHG changed it forever.. I just could listen to this band for weeks and find something new in the tracks each time. Aenaon is not for the begining travel into extreme metal music this is for the seasoned passenger or for the prog and avant rock fan  that want to hear it done in a very odd and metallic manner. Every time I hear those wonderful Dis harmonic Post Metal riffs with the jazz horns I want to raise my hands and let the world know I have music close to my heart and its mine and most will never have this joy in their lives and for that I thank Aenaon and CODE666....

Another band yet out of the ashes of a thrash Icon called Occult reborn with a love of Bathory, Slayer, Kreator and Early Exodus and born is Legion of the Damned. Were going to make this a short review as if you like the 4 bands I just spoke of them you will love this band with all your soul. This is just a full on kick-ass Brutal thrash band . For some of us good metal is just good metal and with Legion of the Damned this is like the best parts of all the great thrash you heard growing up mixed into a band that you will want the next generations of Thrashers cutting their teeth on...

Holy Shit folks a Noise rock meets Post Hardcore wall of Fuck!!! are you into most bands on the early Hydrahead, Current Southern Lord and everything on Amrep label the folks you need to own EVERYTHING by Stuntman. If The Unsane, Kiss it goodbye, Fudge tunnel and Today is the day all came into one room to create an album it maybe less power and pissed off then this album. Bands like Stuntman make me want to punch my neighbor when listening to it . There is so much passion and expression in a band like this it just hurts. Is this album perfect not by any means but its flaws and wall of guitars is just want the doctor ordered for this reviewer!!!!

Post (Rock, Noise,  Prog, AvantJazz, Hardcore, Metal ) that is what this brilliant release is and so much more more more.... East of the Wall members have another fractured pychosis in the making with EL Drugstore. Instrumental music is  just that something your going to worship or hate to the 1000th degree and I just love the shit folks. This is everything that bands like Pelican, Russian Circle, Year of no light and Rosetta have given up to expand upon and EL Drugstore has by adding trippy sci-fi elements to it as well as math rock overtone. I now want to go listen to my Polvo and Shudder to think album and see everything I can learn about music to make a band to surpass the wonderment of EL Drugstore...